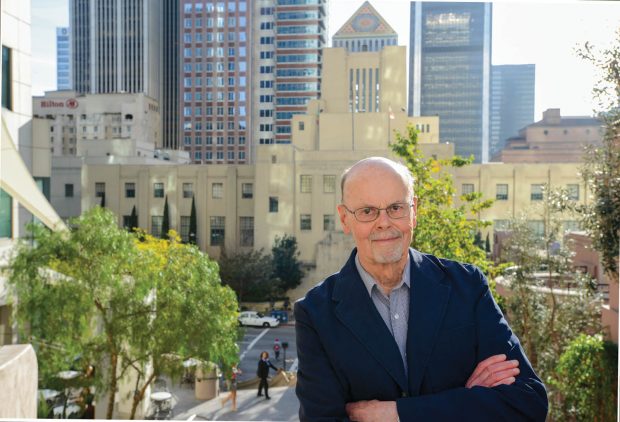 An expert on urban issues, Herman began taking groups of students on bus tours of Los Angeles neighborhoods in the late 1980s, and he made it his personal mission to introduce skeptical suburbanites to the hidden wonders of L.A.’s under-appreciated downtown.

Herman’s love for cities, trains and suburban Claremont all came together in the early ’90s when the new Metrolink commuter train, with a station just blocks from the Pomona College campus, whisked riders to Union Station. As his son Paul Herman recounts, the professor raced into the kitchen and gleefully announced to his wife, Carol, “This is the greatest day of my life!”

Born in 1928 in Champaign, Illinois, Herman spent most of his childhood in Hillsdale, Michigan, where his father taught sociology at the local college. And it was in Hillsdale (and especially on train trips between Hillsdale and his mother’s hometown of Dundee, Illinois) that Herman first developed the love of railroads and passenger trains that stayed with him throughout his life.

During World War II, the family moved twice more: first to Tucson, Arizona, and finally to Redlands, California, where Herman graduated from high school. He served two years in the U.S. Navy, working as an electrical specialist on the still-new technology of radar, before enrolling at Pomona College in 1948.

At Pomona, Herman studied sociology under professors Alvin Scaff and Ray Baber and sang in the glee club and choir. As a chorister with a fine bass voice, he first met and fell in love with Carol Baber ’51, who also sang with the groups. She was a Pomona classmate who happened to be his academic advisor’s daughter. Following graduation in 1951, the couple held their wedding in the Mabel Shaw Bridges Hall of Music on the Pomona College campus before moving to Madison, Wisconsin, where Herman completed a doctorate in sociology at the University of Wisconsin.

After a five-year stint in Ames, Iowa, where he taught at Iowa State University, the couple returned to Claremont in 1960 when he was hired to fill the seat recently vacated by his father-in-law’s retirement. A year later, they settled into the Claremont home where they raised three children and lived together for the next 60 years.

Herman taught sociology at Pomona College for four decades. He ​loved teaching, served for many years as the chair of the Sociology Department and was well known among fellow faculty for his warm collegiality. Above all, Herman was passionate about mentoring students and was honored with the Wig Award for excellence in teaching in 1991. His genuine interest in getting to know people led him to develop friendships with many students, several of whom became lifelong friends.

A tall man with a long, distinctive gait and a ready wave, Herman was a familiar figure around Claremont. Friends and neighbors initially dubbed him the “Jolly Green Giant” due to his habit of jogging through town in an old green sweatsuit. They later nicknamed him “Ironman Bob” as he continued to run daily around Claremont’s Memorial Park well into his 70s. Locals also came to know Herman as a popular tour guide who led countless walking tours of The Claremont Colleges and the Village, during which he shared his deep knowledge of the town and region with an infectious enthusiasm.

His interests reached into Los Angeles in the 1980s and, over time, student tours of L.A. neighborhoods ​expanded into bus and walking tours ​for alumni, faculty and a variety of civic and professional groups. Herman published Downtown Los Angeles: A Walking Guide in 1996, not long before retiring. It filled a niche, and Herman went on to give hundreds of tours of the Civic Center, Bunker Hill and other downtown districts.

He would start at Union Station, which combined his love of the city and trains, and point out the 1939 station’s optimistic architecture, full of arches and color. “It just tells you you’re in a different place,’’ he said in an interview. “This is California. Your life is going to be transformed here.”

Herman was in the lead in foreseeing the transformation of L.A.’s core: “It’s finally happening,” he said in 2007. “We’re getting a lot of people moving downtown. I’ve been waiting for it all my life.”

Beyond cities and trains, Herman loved Baroque music, and his wife Carol’s long career as a Baroque cellist and viola da gambist delighted him, noted his son Paul. Bob and Carol were married for 69 years.

In addition to his wife, Herman is survived by his sister, Eleanor Kemp of Redlands, his three children, David, Molly and Paul, their spouses and five grandchildren.