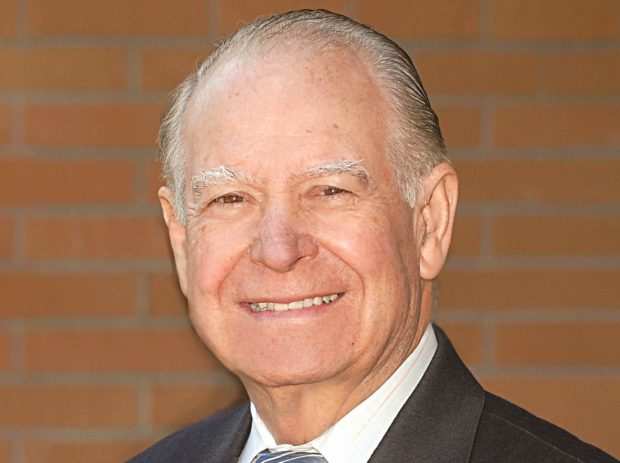 Cruz Reynoso ’53, the first Latino to serve on the California Supreme Court, died May 7, 2021, at an eldercare facility in Oroville, California. He was 90.

Reynoso was “an inseparable part of the last century’s struggle for rights,” says Tomás F. Summers Sandoval, associate professor of history and Chicana/o-Latina/o studies at Pomona.

“In the 20th century, the struggle for Latinx civil rights took on many forms,” Summers Sandoval says. “We might pay greater attention to the mass movements, but most meaningful change is less public and more complex.

“[Reynoso] challenged our system of jurisprudence to live up to its letter and spirit. And he did so while rising to some of the most unimaginable heights for a kid born into a migratory, agricultural life marked by overt forms of discrimination. No matter who we are or where we come from, he led a life from which all of us can take inspiration and purpose.”

One of 11 children, Reynoso was born in Brea, California, and grew up working alongside his parents in the fields and orange groves that spread across what is now urban Southern California. After he earned a two-year degree from Fullerton College, a scholarship brought him to Pomona College. After graduating, Reynoso served in the U.S. Army and then used veterans education benefits to attend law school at UC Berkeley, where he was the only Latino in his class.

As a young attorney in private practice in El Centro, in California’s Imperial Valley, Reynoso joined the Community Service Organization and there met Cesar Chavez, a son of migrant laborers who became the head of the United Farm Workers (UFW). Inspired by service, Reynoso became the director of California Rural Legal Assistance, a legal aid organization dedicated to helping farmworkers and other low-income residents of rural areas. Among the rights he fought for were access to sanitary facilities for laborers as well as protection from dangerous pesticides, forcing the federal government to hold hearings that led to a ban on DDT.

Appointed to the Third District California Court of Appeal in 1976, Reynoso was elevated to the California Supreme Court by Gov. Jerry Brown in 1982. In 1984, Reynoso wrote the majority opinion in the landmark case People v. Aguilar, in which the court ruled that non-English speaking people accused of a crime had the right to a translator during the entire court proceeding.

“In the ethnic richness of California, a multiplicity of languages has been nurtured,” Reynoso wrote. “The people of this state, through the clear and express terms of their constitution, require that all persons tried in a California court understand what is happening about them, for them, and against them. Who would have it otherwise?”

In 1986, however, Reynoso and another liberal justice were swept up in widespread opposition to Chief Justice Rose Bird, and the three were removed from the court by voters upset over their decisions against the death penalty.

Reynoso went on to serve on the law faculties at UCLA and UC Davis, and he was vice chairman of the U.S. Commission on Civil Rights from 1993 to 2004. He also served on the Select Commission on Immigration and Refugee Policy and the United Nations Commission on Human Rights.

In 2000, President Bill Clinton awarded Reynoso the Presidential Medal of Freedom, the nation’s highest civilian honor, for his “compassion and work on behalf of the downtrodden.”

An award-winning documentary, Cruz Reynoso: Sowing the Seeds of Justice, tells the story of his efforts for equity from an early age. Among them were protests against segregation in school activities and a successful drive to petition the U.S. postmaster general to expand rural mail delivery when the local post office would not bring mail to the barrio where his family lived.

Blessed—or burdened—with an inborn sense of fairness, Reynoso persisted in his work for others over his long life. Even at age 80, he led an investigation into the death of a young farmworker shot by police, and another on the pepper-spraying of students at UC Davis during a peaceful protest march.

“As a youngster I had what I called my justice bone,” he told PCM in 2012. “When I saw something that was really unfair or unjust it hurt, and so I felt compelled to do something about it to relieve that hurt. And I think that is still true today. So in some ways, what I do is a selfish effort to not hurt by taking on some of those issues.”