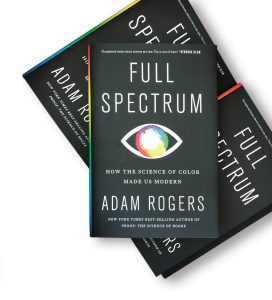 Adam Rogers ’92 showed his first glimmer of interest in the mysteries of color perception with a middle school science project. He simply colored in a square on a piece of paper, held it up and asked the class, “What color do you see?”

Most students saw red, but one replied, “Pink.” Decades later, the science writer delves deeper into the ways that humans relate to color in his new book, Full Spectrum: How the Science of Color Made Us Modern. Here he explains a bit about how the book began, what he learned while writing it and what science journalism is like today.

PCM: Where did the idea for a book about the science of color come from?

Adam Rogers: As a science reporter at Newsweek in the ’90s, I found out about this pigment, this one molecule, this one chemical called titanium dioxide. It makes the color white.

It’s the super-light metal that you make artificial hips and Soviet-era submarines out of. Titanium, you take one atom of that, two atoms of oxygen, you stick those together and you get this stuff with a super-high refractive index, very opaque, very bright. And when you make it into a powder, if you do the right chemistry on it, you can make the color white, and it also becomes a ubiquitous chemical in all of the things around [us]. It’s in a lot of different kinds of paints; it’s in paper; it’s in a lot of plastics; it’s in pills and some foods.

I got obsessed with this idea that there was this one thing that was just everywhere—and essentially invisible. Except that it was also a color. I couldn’t shake that.

PCM: How long did it take you to write the book, and what are some of the places that it took you?

Adam Rogers: From the time I said, “OK, it’s going to be a book” to now is, I think, four years. I was late; I ran late on it. I went to the place in Cornwall, in England, where titanium was discovered, where somebody first identified that there was some new element in the dirt in the bed of a creek. I spent some time wandering around museums in Paris trying to see the colors instead of just seeing the art. I went to a professional coding conference in Indianapolis and tried to talk to the people who use color to put on things like cars.

There was some time spent in university labs, talking to folks about their research looking into the brains of monkeys and trying to understand what happens in those brains when they see color. In Boston I was talking to folks about trying to 3D print or paint forgeries of paintings that would be indistinguishable from the actual painting because of the way that they responded to the color around them.

Adam Rogers: There has to be some early example of life that first started to be able to see color…[maybe] a totally different branch of life on the tree that’s billions of years old that would have been the first living things on Earth that turn out to have been able to distinguish between basically blue light and red light. Because one of those [colors] would have told them how to hide, and one of them would have been a place where they could hunt, where they could go look for food.

To do that, those critters had to develop the pigments that would respond differently, that would send a signal inside their own little single cells that would say either, “OK, now we’re getting this one wavelength; go toward it,” or “Now we’re getting this other wavelength; go away from it.” So the question then is how did they evolve that [ability]? The hypothesis is that it began as a form of photosynthesis—that you develop these very complicated molecules, versions of which still exist today in plants, that will be able to use the photons coming into the bodies of these microorganisms, of these microbes.

PCM: Do you ever find yourself out of your scientific depth?

Adam Rogers: All the time. I have no scientific depth in some respects. My formal science training was at Pomona, and that was it. I was a science, technology and society major. I have slightly more than half of a biology degree [and studied a lot of] history. That turned out to be really meaningful, because I find myself still writing STS stuff. Somebody had to point it out to me, that I’m still doing STS.

PCM: With the degree of science denial and the politicization of science and the general lack of scientific literacy in America today, it must be frustrating. Do you run up against that as a writer?

Adam Rogers: I do. Ten years ago I would have said, “Well, it’s on me to make sure that people understand my writing.…People won’t know what I’m necessarily talking about from the jump, and I have to compel them to come into a story and give them reasons to keep reading and then explain to them stuff that’s right and true.” I still think all of that. I think that some of this [science denial or limited scientific literacy] is the media’s fault, but some of it’s not. People have so little understanding now not only about science and the way that you might learn it in a classroom, but also about just who scientists are…and how you know something is maybe more true than something else. Societally, we have been terrible at explaining that to people. We don’t really teach it, we don’t really make it a priority, and I think we’re reaping some of that now.

PCM: What advice do you have for young people out there who are interested in pursuing a career in science writing?

Adam Rogers: I hope that they will. It is a hard time in journalism now, for social reasons and economic reasons. But I remain optimistic that even if the kind of places that do journalism will change, there still will be places to do journalism, and I think that writing about science—don’t tell any of my colleagues—I think it’s the most important beat. Don’t tell anybody I said that.

—Abridged and adapted from Sagecast, the podcast of Pomona College