The Great Outdoors is In Again (Especially in Your Own Backyard) 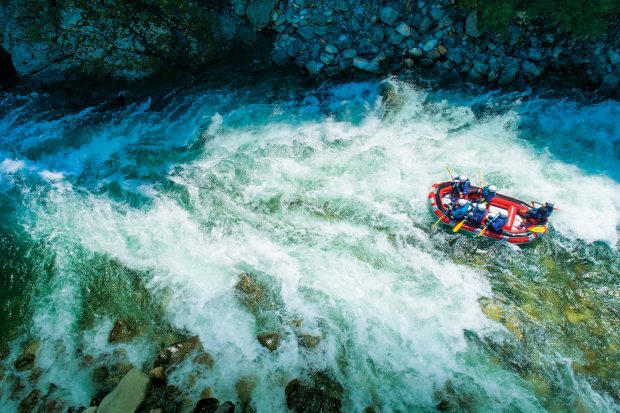 Last spring the number of travelers passing through our nation’s airports, as tallied by the Transportation Security Administration, plummeted from an average of about 2.5 million per day to a low on April 14 of just 87,534—a reduction in airline traffic of more than 96 percent. Hotels suffered a similar debacle, with occupancies plummeting by three-quarters. And after coronavirus catastrophes on a couple of cruises, the whole cruise industry slipped into a kind of induced coma.

Since then, there has been a slight recovery in some sectors—airline traffic has rebounded somewhat, to about a third of last year’s norm—but as a whole the travel and tourism industry remains on life-support. What all of this means for the long-term future of leisure travel and tourism is still unclear. But at least in the short term, there are signs of a shift in the way Americans think about travel.

Alison Mathes ’05, CEO of AVA Rafting and Zipline, first saw those signs way back in May, when the rafting season opened up on Colorado’s rivers. “We were a little bit shocked actually at the volume of interest when we opened up in the spring,” she says. “We were expecting a tiny trickle of interest, a few people who are a little bit more adventurous, willing to try group activities, willing to try getting out, doing things in public again, but really, it’s apparently what everyone wants to do.”

According to the U.S. Travel Association, 60% of Americans now consider outdoor recreational activities relatively safe—something that can’t be said for most other kinds of outside-the-home entertainment in a time of pandemic. After a slow start, attendance at national parks around the country boomed all summer long as Americans sought to escape from their confinement into the relative safety of the great outdoors.

“I think people really are itching to get outside, both from having been cooped up for so long but also looking for something that they feel comfortable doing, and outdoor recreation seems to tick all those boxes,” Mathes says, noting that her outdoor outfitting company remained booked up all summer long.

The biggest challenge, she says, has been ensuring the safety of both customers and staff. “For all of our activities, we have tried to do as much outside as possible. So rather than having people come inside to check in, we’re doing outdoor check-ins at all locations, requiring masks on-site. Transportation—we’re doing half capacity with staggered seating so that people aren’t too close together, keeping all windows open, requiring masks on vehicles, loading back to front and then unloading front to back, so that people aren’t crossing each other.”

They also do a lot of screening. “We ask at the time of reservation if they’re feeling ill or have any symptoms, and then we also ask the day before that they review and make sure that they do not have any symptoms, they’re not feverish. And that if they are feeling any of those symptoms, they’ll call us in advance and cancel, and we’ll give them a full refund in that context. And that seems to have worked. We have not had people show up exhibiting symptoms that needed to be turned away.”

One change that Mathes witnessed throughout the summer was a surge in the number of people who were trying activities like rafting, hiking or zip lining for the first time. “It’s been nice to see how much people seem to be connecting with these outdoor activities,” she says. “And I think a lot of people will continue that after this. Even if, let’s say, we magically get a vaccine in the next six months, I think we’ll continue to see people looking to get outside and enjoy nature-based activities more than they have historically.”

A lot of those newbies, she says, are turning into enthusiasts and investing in the experience. “People are going out and buying a mountain bike for the first time,” she says. “They’re investing in fly-fishing gear. They’re buying a tent and sleeping bags. They’re really putting money behind these activities, and I think they’ll continue to use that equipment moving forward.”

Another change from previous years, Mathes says, is that her clientele has become overwhelmingly local, as vacationers look around for nearby opportunities they’ve overlooked in the past. The tourists who used to fly in from the coasts for an outdoor adventure and then fly out again have been replaced by car traffic, mostly from Colorado and neighboring states, though she’s seen a few license plates from as far away as Massachusetts. “What I’m seeing is people are really comfortable jumping in a car and driving to a destination to get outside,” she says.

As a result, the old-fashioned road-trip vacation seems to be making a comeback. That was the fallback choice of Chuck and Maggie Seaca of Anchorage, Alaska, whose summer plans for a big wedding and a honeymoon in the Galápagos Islands were overturned by the pandemic.

“We were supposed to get married in a big celebration with lots of friends who were going to come out to Alaska,” explains Chuck Seaca ’14 (known to his classmates as Chuck Herman). “And we had rented out a big campground, and it was going to be a big celebration where everybody camped and had fun. Sadly, that was unable to happen due to coronavirus.”

Instead, for their wedding, the couple decided to take a small party of local friends back to the site of their engagement—on top of a glacier in Wrangell-St. Elias National Park. “We hiked seven miles total,” Seaca recalls. “Maggie did the whole thing in her wedding dress.”

Next they had to make a decision about their honeymoon plans. “We kind of kept up that hope for a while,” he says, “and then realized that probably a cruise ship out to the Galápagos, which is essentially the main way to go out and see them—that it was not the ideal time to do that.”

So instead of flying and sailing, they decided to think local and do something neither of them had ever found time to do in their years in Alaska—drive north past the Arctic Circle. “We got pretty lucky with Denali National Park,” he remembers. “Normally you’re never allowed to drive in on your own. You have to take a shuttle or a big bus run by a tour company. But because there are so few tourists, they opened up a pretty limited permit system to let you drive in on your own.”

Self-described nature lovers, the couple tallied a wide range of animal sightings—including 11 grizzly bears, nine caribou, six moose and very few people—during a road trip that took them more than 200 miles north of the Arctic Circle and then, after a few days of camping and hiking, 700 miles back to Anchorage. “While the honeymoon wasn’t to the Galápagos like we’d hoped,” Seaca says, “we got to explore parts of our own state that we’d never seen and had a delightful time north of the Arctic Circle with the bears, moose and caribou.”

On the flip side of the rediscovered road trip, Mathes says, she’s also seen another growing trend—people who are moving lock, stock and barrel to the places where they used to vacation.

“We’re seeing a lot more people move out to these vacation destinations in Colorado as well,” she says. “I think people, as they’re able to work remotely, are shifting their whole lifestyle in order to be closer to the activities that they want to do and closer to the places they would normally spend a lot of money to visit for a week once a year. So it’ll be really interesting to see how that shakes out, but that seems to be what people want to do, at least in the short term.”