The New (Ab)Normal in Elections
December 3, 2020  by Robyn Norwood 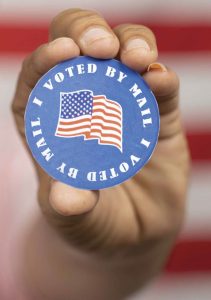 Election Day—at least as we knew it—is a thing of the past. The pandemic expanded and accelerated a U.S. shift toward vote-by-mail and early voting that turned Election Day into voting season instead.

And the tradition of Election Night as a television production that inevitably reaches its exciting conclusion with concession and victory speeches before people go to bed on the West Coast? Also kaput. Bush v. Gore took care of that in 2000 when the U.S. Supreme Court finally decided the election less than two weeks before Christmas. But delayed results may become increasingly common, particularly in down-ballot races, as voting by mail and slower validation and counting of ballots become more entrenched in American democracy.

“I do think that as a country, we might have to get used to the idea that we don’t know who wins the election on Election Day,” says Debra Cleaver ’99, the founder and CEO of VoteAmerica, the latest in the series of nonprofit voter registration and turnout organizations she has started, Vote.org among them.

Still, in a world where seemingly everything has gone online due to the pandemic, do not expect voting to follow.

“No to online voting. That would be a wonderful way for us to get 160 percent voter turnout,” Cleaver says.

“The Internet is horribly insecure. I imagine someone will point out that we bank online. Bank accounts are FDIC insured,” Cleaver says. “I think we are very far from online voting, whereas voting by mail, it’s so insanely secure. The most secure vote is a vote on a piece of paper. When we vote by mail, there is an actual piece of paper.”

Ever strategic, Cleaver considers the vulnerabilities by gaming it out. “It would be very hard for me personally to rig an election held by mail, whereas I mean, my tech team could absolutely hack the … out of an election held online. So yeah, let’s not vote online. All the votes will come from Russia. It’s a fair question. But I hope the answer to that is never.”

Cleaver has been engaged in the vote-by-mail movement since 2008, when she founded Long Distance Voter, a nonprofit dedicated to increasing turnout by making it easier to vote by mail.

Underlying all her efforts is the historically low voter registration and turnout in the U.S.—though Donald Trump became an extremely unlikely ally, driving the massive turnout in the November election. Before 2020, the percentage of the voting-eligible population to cast a ballot in a presidential election hadn’t reached 65% since 1908.

“Americans don’t need to be convinced to vote. They need to be able to vote,” Cleaver says. “It is objectively harder to cast a ballot in the United States than in any other nation with democratically elected leadership. Once you start there, it’s just a matter of identifying what’s keeping them from voting.”

VoteAmerica and other voter sites offer tools to help people register to vote, check their status, sign up for vote-by-mail or find their polling place. In VoteAmerica’s quest to remove roadblocks, it came up with another.

“Sixty-seven percent of Americans don’t have printers,” Cleaver says. “So if you need to print a mail-in form, you can’t. At the end of our workflows, for people with these printed mail-in forms, there’s now a line that says, ‘Click here if you need us to print and mail this form to you.’ And we do that.”

Voting by mail has other benefits, including cost savings.

“It’s actually expensive to have polling places. You have to pay for poll workers. You have to do all that training with them. You have to map citizens to polling stations—it’s just a tedious administrative process,” she says.

Despite fears related to the decisions that slowed the U.S. Postal Service, as well as worries about tampering, widespread voting by mail is likely here to stay.

“The first year that a state votes by mail, people are a little thrown off by the process. Change is hard for people. But then it becomes overwhelmingly preferred by citizens,” Cleaver says.

“Some lower-propensity people will say that they didn’t vote because they didn’t feel like they knew enough. But when we move to vote-by-mail, people have more time to research what’s on their ballot. And so not only does it increase turnout, it increases the percentage of people who vote the entire ballot, not just top of ticket, because people have time to research all the weird things on your ballot, like judges and ballot measures.

“People prefer vote-by-mail by an overwhelming margin once they have it. I think we’ll see more and more states move to vote-by-mail, which is great because it will increase participation.”