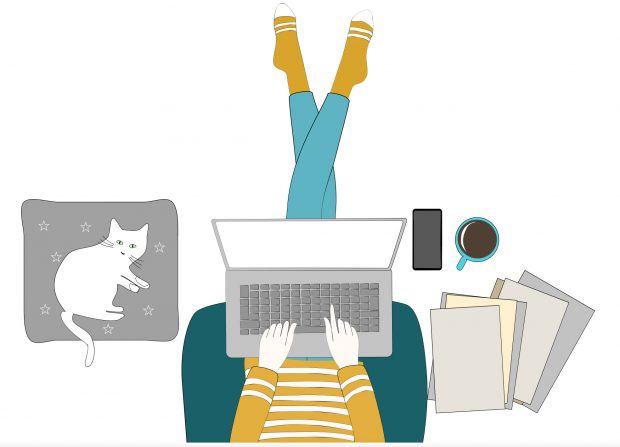 As coronavirus cases spiked across the country in the fall, companies continued to recalibrate their work environments. Working from home may have seemed a temporary measure back in the spring, but it’s now becoming a more permanent solution for many.

Microsoft announced in early October that it will allow some of its employees to work from home until at least 2021, joining others such as Target and Ford Motor Company, as these companies struggle to figure out how to arrange offices in a way that keeps workers socially distanced and safe. Facebook took it one step further, allowing employees to work from home permanently.

While a move away from an in-office culture makes it harder to create connections and serendipitous moments of creativity, Laszlo Bock ’93, founder and CEO of Humu and former head of People Operations at Google, told the Wall Street Journal that right now, checking in on how an organization’s team members are doing is the most important thing an employer can do to keep them productive. No one should be surprised, he said, that the productivity gains that accompanied the move to remote work have now leveled off as fatigue has begun to set in.

“It was people being terrified of losing their jobs,” he told the Journal, “and that fear-driven productivity is not sustainable.”

Still, the experience with remote work has caused some companies to consider whether their employees need to be in the office at all, says Carol Fishman Cohen ’81, chair and co-founder of the career reentry firm iRelaunch. “Whereas face time in the office used to be a priority, the pandemic has forced a reckoning of whether productivity levels are equal or even higher if employees are working virtually.”

According to a recent study released by Upwork, it’s estimated that an astonishing 14 million to 23 million Americans intend to relocate to a different city or region as a result of telework.

The implications, Fishman Cohen said, are huge, no matter whether you’re an employer or an employee. “For employers, if roles are not location-specific, companies can search for talent anywhere in the country, and for some, the world. They can rethink their expenditures on real estate and business travel. For employees, taking location out of the equation means they can live anywhere they want and can move out of high-cost-of-living urban centers to smaller cities or more-remote locations if they choose.”

The ability of workers to work from home, however, depends on a couple of things. Obviously but importantly, it depends on the survival of the organizations that employ them—and in times like these, that can be a stressful concern. It also depends on technologies that are being adopted in a rush and often stretched to their limits. For organizations and their employees alike, the name of the game during the time of COVID-19 has been coping with the resulting disruptions.

Organizations of all kinds have felt the shockwave from COVID-19 on their notion of business as usual, says Jose Low ’96, HR business partner at Port Logistics Group. The degree of impact, however, depends on the industry, the type of organization and its previous level of technology.

Adapting to the challenges has been especially tough for small businesses in which higher levels of in-person, face-to-face involvement and interaction are required to get the job done, according to Low. “Larger and medium-sized companies that have incorporated technology in the last few decades to allow a portion of their workforce to remotely connect in and to virtually collaborate and complete tasks and workflows seemingly have been able to flex and minimize disruptions,” he explained.

Organizations have also faced disruption due to their dependence on the global economy, he noted. “Despite individual functions and organizations being able to adapt more quickly through technical capabilities, we’ve seen and experienced that a disruption in some part of the supply chain network still significantly impacts other areas—affecting the production and delivery of products as well as performance of services.”

However, despite  all the roadblocks the pandemic has dropped into the world of work, it has also created a few opportunities.

Fishman Cohen works with employers to create “returnships” and other programs to bring back mid- to senior-level talent after career breaks for childcare, eldercare and other reasons. A ‘relauncher’ herself, Fishman Cohen’s return to work at investment firm Bain Capital after an 11-year career break was the subject of a Harvard Business School case study.

“Even before the pandemic, relaunchers typically feel pretty isolated in their experiences while trying to return to work after a multiyear career break,” says Fishman Cohen. “Now, with unemployment levels having spiked and still remaining high, ‘relaunchers’ are feeling more vulnerable, because they picture themselves standing in line behind millions of newly unemployed, which makes them feel their chances of getting hired are even slimmer.”

But the pandemic has also created an urgent demand for medical and technology professionals to return to work from retirement or a career break. “Any prior stereotypes and hesitations typically associated with hiring back older workers disappeared in our country’s hour of need, and these professionals reintegrated back into the workforce efficiently and effectively,” says Fishman Cohen.

For his part, Low believes that the pandemic is giving us a glimpse of what work may look like in the future. “It’ll take time, and different areas will experience different rates of change, including traditionally labor-intensive areas that require care and fine dexterity and manipulation.”

Of all of the members of the workforce, perhaps the hardest hit are the young people just preparing to enter it. They’re the ones Hazel Raja, senior director of the Career Development Office at Pomona College, worries about on a daily basis.

“In terms of challenges, one thing that I don’t think people talk enough about is the mental and emotional impact of the pandemic on these young adults,” she says. “Our alums and students may be juggling a lot. Some may have different responsibilities off-campus compared to the responsibilities they had when classes were in session on campus; so their ability to set up informational interviews and/or to do career research may be difficult because of their living situation, household responsibilities, part-time jobs, etc. It’s no doubt a challenging time for many, but the transition from college is already a bumpy one without a pandemic.”

Raja points out, however, that there may also be some upsides to the COVID era that college students and new graduates should bear in mind. Even though current opportunities to connect in person with potential employers and recruiters are limited to virtual programming and events, for some this may become an advantage.

“Students who thrive in an online environment will feel a lot more comfortable engaging behind the screen. This environment removes some, but not all, of the awkwardness and nervousness that may be attached to new introductions,” she adds. “Moreover, the pandemic may open up space for students to really consider what they want to focus on as far as career prospects. Many new industries and career fields will be created through this pandemic, and our students’ liberal arts education can set them up beautifully for what’s on the horizon.”