The National Champion Sagehens Are Keeping the Faith.
December 3, 2020  by Robyn Norwood 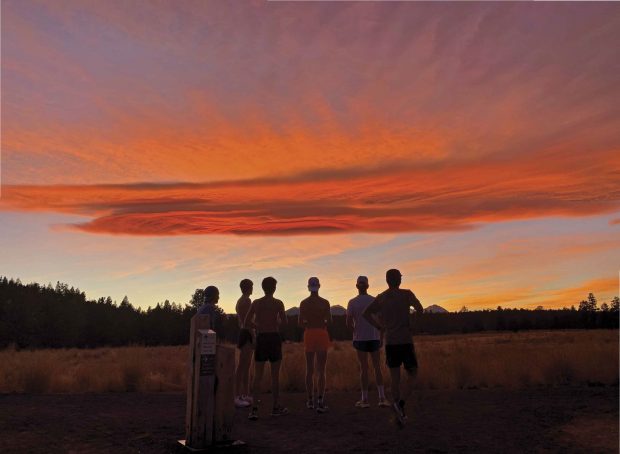 The defending national champions in men’s cross country from Sagehen Athletics will not get a chance to repeat this year after NCAA Division III championships in all fall sports were canceled because of the pandemic.

But the Pomona and Pitzer College runners still train, and many of them lived together for the fall semester in several pods across the West.

In Keystone, Colorado, Dante Paszkeicz ’22 and three teammates found a place together.

“Surprisingly enough, it’s a ski resort town but it was the cheapest housing we could find for such a short lease,” he says. “Because of COVID, no one’s traveling all that much, and it’s not ski season right now. We got really lucky with it.”

In Park City, Utah, Ethan Ashby ’21 and Owen Woo PZ ’21 were among a group that converged on another high-altitude training spot.

And in Bend, Oregon, eight first-year runners found two houses they could rent. Despite being new to a team that had just seen its season canceled, Lucas Florsheim ’24 was one of the leaders of the plans to live and train together.

“We were talking in our meeting about what it meant for our season, for our team, and then afterwards, I was like, we have to do something,” Florsheim says. “For me, it was freshman fall. I wanted to get at least some sort of new experience. Being on campus obviously couldn’t happen. But I definitely wanted to move out and study with people and train with people. I just sent out an email that same afternoon asking if people would be interested.”

The responses came back rapidly.

“A lot of people were like, ‘I was literally about to send the same email,’” Florsheim says.

The runners’ search for a place that a couple of dozen college guys could live together proved challenging, says Head Coach Jordan Carpenter.

“I think trying to find that much housing right by each other and places that were willing to rent to 18- to 21-year-olds fell through a little bit,” says Carpenter, who was chosen the Division III national coach of the year by the U.S. Track & Field and Cross Country Coaches Association after the 2019 title.

Still, the runners persisted, creating their own pods—living, running, studying and usually eating together.

“We’ve just been splitting up the bill for groceries, cooking mostly shared meals,” says Paszkeicz, a 2019 All-American who admits his training diet is not so strict that it doesn’t include the doughnuts regularly found in the discount aisle at the local grocery store. “We’ve been doing surprisingly well for four guys living on their own out here,” he says. “But, yeah, definitely missing Frary [Dining Hall].”

Things got rough for the group of first-years in Bend after the Oregon wildfires in September resulted in poor air quality and no opportunity to run. But a group of senior teammates in Utah who had never met them welcomed them for a quick road trip to Park City.

“Some of us wanted to go find some clean air,” Florsheim says. “So we drove to Utah and met some of the guys and got to go on a couple of runs.”

For Carpenter, the situation has created opportunities for innovation, though under NCAA rules he can design workout plans only for runners enrolled full time—some were in school part time for the fall semester—and those who were able to secure required physicals.

“One of the silver linings of everything going on is it’s forced us as coaches to look for new ways to do what we do,” he says. “For me, it’s meant using some new technologies that we hadn’t used in the past.”

An online training platform allows Carpenter to send out individualized plans for each runner and adjust for the high altitudes where they’re training. “Most of them have GPS-enabled watches. The platform will actually pull that data when they finish a run and upload it on my end so that I can analyze it.

“If they have a GPS-enabled watch, it will show me the cadence, so their steps per minute throughout the run, and graph that. It will graph their pace that they’re running, a graph over time. I’ll see elevation changes from the route they ran. If they hit a big hill, that might explain why they slowed down.”

Other Sagehen teams are trying to continue whatever training they can and hold regular Zoom meetings to maintain their sense of community. Still, the nature of cross country means the team could continue to train in ways other teams can’t. There have even been virtual time trials, not only within the team, but also against Occidental at a virtual meet in October. Among the top finishers was Hugo Ward ’21—who ran his race at home in Sweden.

“It’s not like football or basketball or a team sport where you work on certain parts of your game, but you can’t participate in the actual sport of it,” Carpenter says.

It’s a loss that for seniors is irretrievable unless they take advantage of the NCAA’s grant of an additional year of eligibility. But realistically, Pomona and Pitzer students would be more likely to graduate and take the year of eligibility to a university to begin graduate school, perhaps with an admissions edge or possibly athletic scholarship assistance.

By now, most of the runners have made a sort of peace with the season that wasn’t.

A Chance to Explore

Ethan Widlansky ’22, who earned All-American honors after finishing seventh nationally at the NCAA championship meet, found it somewhat freeing once the decision was made.

“As soon as I found out, I actually went on a bike trip,” he says. “I went with some friends and we all biked the Olympic Peninsula. It was a lot of fun and something I wouldn’t have been able to do if I had been training full time. So, yeah, it’s been hard, and realizing that we weren’t going to have a season was really tough. But it’s also afforded me flexibility in training that has also been kind of valuable.”

Widlansky, who is also from Seattle, went up to Blaine, Washington, where he did some backcountry running with some members of the Sagehen women’s cross country team. Back in Seattle, he is living at home, where he has run with recent alumni Dan Hill ’19, now working in the wealth management field, Danny Rosen ’20, a member of the NCAA championship team who is working as a software development engineer for Amazon Web Services, and Andy Reischling ’19, who is working remotely for PBS in its documentary division after returning home from New York during the pandemic.

Widlansky also has been involved in progressive causes related to the election and racial justice, both formally and informally.

“On a more micro level, I think the discussions I’ve been having with my mom and my family and some of my more conservative friends have been more important,” he says.

“While it’s a bummer that we don’t get to compete in nationals, it feels like there’s been a hell of a lot more going on than just D-III NCAA competition.”