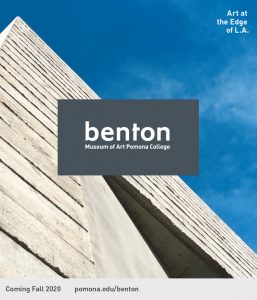 The Pomona College Museum of Art has a new building under construction, and now it also has a new name, in honor of Janet Inskeep Benton ’79, whose lead gift of $15 million is helping to fund the new structure.

Opening in fall 2020, Benton Museum of Art at Pomona College or, more simply, The Benton, will provide a space for some of SoCal’s most compelling and experimental exhibitions. The 33,000-square-foot facility is under construction where the campus meets the lively Claremont Village and the city’s civic center.

For decades, Pomona College has played a key part in shaping innovative artists on the edge of L.A., including Helen Pashgian ’56, James Turrell ’65, Peter Shelton ’73, the late Marcia Hafif ’51 and the late Chris Burden ’69. The Benton’s collection will include pieces from all of these alumni, and future exhibitions will carry forward the College’s emphasis on cutting-edge art in the Los Angeles region.

“The Benton will be a rewarding visit for all who seek to venture beyond the expected and to explore the diversity of California,” said Pomona College President G. Gabrielle Starr. “This new museum will benefit our students, our community and the SoCal art scene in which our campus has long played an important role.”

Designed by Machado Silvetti Associates and Gensler, the new structure with cast-in-place concrete walls is accented with wood, glass and a distinctive sloping roofline. Built to LEED gold standards of sustainability, the U-shaped museum will define a central courtyard, with a pavilion for events.

Construction of the $44 million facility, located on the west side of College Avenue between Bonita Avenue and Second Street in Claremont, is set to be completed by fall 2019, launching the yearlong process of moving the museum’s extensive collection to the new facility and installing opening exhibitions.

The new building replaces the existing Pomona College Museum of Art. Housed in a ’50s-era facility, PCMA continues to operate across the street from the ongoing construction. Exhibitions there will continue through May 2020, with the new museum set to open later that same year.

The Benton will continue the current museum’s Project Series, focused on contemporary SoCal artists, which has included exhibitions from Andrea Bowers, Mark Bradford, Charles Gaines, Ken Gonzales-Day, Amanda Ross-Ho and many others. The museum also has been part of the Getty Foundation’s celebrated Pacific Standard Time projects in collaboration with institutions across Los Angeles.

Built on three levels, the new building is conceived and designed as a teaching museum, fostering instruction within collection areas and exhibition spaces, creating opportunities for active encounters with original works of art.The Benton will provide state-of-the-art storage and ease of access for a growing permanent collection of over 14,000 objects.

“Pomona College has long been at the center of artistic excellence and experimentation for Southern California,” said Museum Director and Professor of Art Kathleen Howe. “The Benton continues our commitment to presenting vibrant contemporary art, intimately engaged with the issues of our day, while bringing the art of the past into an ongoing dialogue with the present.”

The Benton will house an extraordinary collection of Native American art; the Kress Collection of Renaissance panel paintings; significant collections of photographs, prints and drawings; and a growing contemporary collection. Four complete series of etchings by Francisco Goya, as well as works by historically important regional and international artists such as Karl Benjamin, Rico Lebrun and José Clemente Orozco, are included in the collection.

A longtime supporter of the museum’s programming, Janet Inskeep Benton is also a member of the Pomona College Board of Trustees. A history major at Pomona, Benton went on to earn an M.B.A. at Harvard Business School. After working in product management at General Foods Corporation in the mid-1980s, she left the workforce to raise her family and serve on various not-for-profit boards in her Westchester County, New York, community.

She is currently board chair of the Jacob Burns Film Center, a not-for-profit art-house theatre complex and media-arts education center. In 2000, Benton founded the Frog Rock Foundation, a philanthropy focused on improving outcomes for underserved  children.

Benton is most excited about the new museum as a gathering spot on campus where both intellectually and personally enriching experiences happen. “Art is a powerful force, opening up the mind to so many possibilities—new ideas, varied perspectives, interesting questions, emotional responses, reconsidered thinking,” said Benton. “My hope is that the new museum creates a stimulating environment for students to explore and engage with art in a deeply meaningful way.”

Only blocks from the Claremont Metrolink train station, The Benton will be a focal point for artistic expression on a campus that is also home to a Turrell Skyspace, “Dividing the Light” (2007), which draws visitors from near and far, and muralist José Clemente Orozco’s “Prometheus,” widely regarded as a masterpiece. Nearby are the Claremont Museum of Art and galleries at Scripps and Pitzer colleges, as well as in the Claremont Village.

“The new museum will serve as a lasting connection point between the College and community, and also with the entire region,” said President Starr. “Southern California is known as a place of boundless artistic innovation. Pomona College is part of that unfolding story, and we plan to continue to help shape it.”