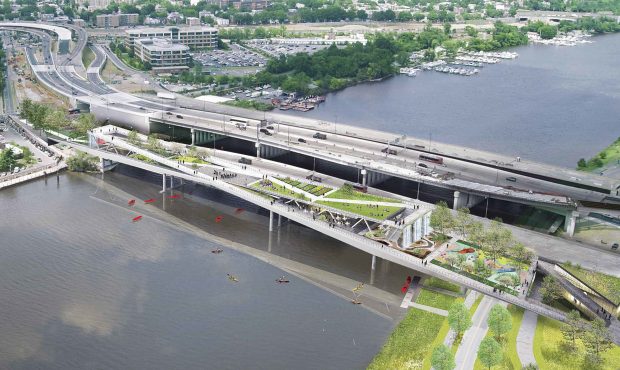 Scott Kratz ’92 was having breakfast with a good friend, who at the time was director of D.C.’s Office of Planning, when he asked an offhand question about all the construction going on with an old bridge over the Anacostia River. To his surprise, Harriet Tregoning began to lay out her dream for transforming that old span into a park.

That was six years ago. Kratz, a history major in his Pomona days, eventually quit his job at D.C.’s National Building Museum to lead an effort that now employs nine full-time staffers and has set a $139 million goal that includes bricks and mortar as well as investments in nearby neighborhoods to ensure local residents can thrive in place by the time it opens in 2023.

Along with lots of good press, the project has drawn financial backing from the city, foundations and corporations as well, with Building Bridges Across the River, (a nonprofit where Kratz is vice president), so far securing $85 million of the needed funding while engaging the community in a positive vision for the future.

Ambitions for the 11th Street Bridge Project were big from the start. Take an abandoned bridge connecting the well-off Capitol Hill and Navy Yard neighborhoods to low-income and often overlooked Anacostia. Turn it into a vibrant park devoted to recreation, environmental education and the arts. And, in some way, help bring the city together.

Plans soon grew even more ambitious.  During one of the 1,000 community meetings held to date, one thing became clear: there were much greater needs in Anacostia—for wealth creation, housing, jobs and more. The effort shifted toward the concept of equitable development, with the aim of getting ahead of gentrification and potential displacement. The key question: “Who is this for?” asks Kratz, noting the massive disparity in household incomes between the mostly white area west of the river and mostly black Anacostia to the east.

Some of the answers: launch workforce development efforts to help people get jobs in fields such as construction, start a homebuyers club and a community land trust, a mechanism that allows people with limited incomes to become homeowners. (Simply put, buyers purchase the house, but the trust owns the land beneath it, which reduces the price. Deed restrictions limit buyers to those within a certain level of income.) Already, 71 renters have become homeowners. Long-term plans call for 1,000 units of affordable housing. Kratz recently piloted 5-to-1 matched savings accounts for 110 east-of-the-river families to support access to college.

Of course, economic justice isn’t the only aim of the project. Everything from urban agriculture to an environmental education center to public art and performance space are part of the plan.

This may sound like a lot for one span to hold, but for Kratz it’s not so much about the bridge as the communities it will connect. Kratz notes how D.C. is booming, with a growing population, but areas such as Anacostia have been left behind.

“It’s really tempting to think, ‘This isn’t our job,’” says Kratz. But “if we don’t get this right, then we’re probably not going to get it right in this city.” 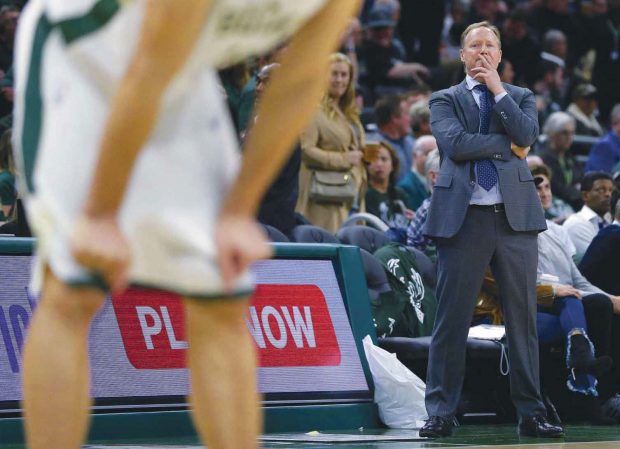 Milwaukee Bucks Head Coach Mike Budenholzer ’92 was already the talk of the NBA before his selection in April by a vote of his fellow NBA coaches to receive their Coach of the Year award for 2019.

“In less than a year since taking over as head coach,” Matt Velazquez in the Milwaukee Journal Sentinel wrote the day the award was announced, “Budenholzer has totally transformed the Bucks. They went from being one of the worst defensive teams to the best in the NBA. They rebound at a high level, they don’t foul and they punish opponents with a potent offensive attack built on points in the paint and letting three-pointers fly. After years of up-and-down play, the Bucks were consistent on their way to recording the best record in the league this season. They lost two games in a row just one time and won the season series against every Eastern Conference foe. Budenholzer’s schemes, love of efficiency in all aspects of life and individual development— known as ‘vitamins’— are hallmarks of his philosophy that have paid dividends since the day he arrived in Milwaukee last spring.”

In his first year with the Bucks, Budenholzer guided his team to a league-best record of 60-22 and the top seed in the playoffs. The last time Milwaukee had 60 regular season wins was almost 40 years ago, in 1980–81, the era of Marques Johnson, Bob Lanier and Sidney Moncrief. This year’s record was a 16-victory improvement over last season and gave the Bucks their first divisional title since 2000–01. The Bucks were the only team to rank in the top four in both offensive and defensive ratings, and had the best net rating in the NBA.

Still described occasionally as a “disciple” or “acolyte” of the legendary Coach Pop—Gregg Popovich of the San Antonio Spurs (and previously the Pomona-Pitzer Sagehens)—under whom he served as assistant coach for almost two decades before getting his first head coaching opportunity with the Atlanta Spurs, today Budenholzer has earned his own three-letter nickname—“Bud”—and has emerged as a coaching force in his own right, though he still attributes much of his success to learning at the feet of the master.

Of course, all he did in Atlanta was lead the Hawks to four playoffs and record the team’s first 60-win season while being named 2015 Coach of the Year. Last year, however, with the Hawks in a rebuilding mode, Budenholzer decided that the time was right to move on—and the offer from the Bucks was the perfect next step.

As with Coach Pop, Budenholzer brings to the team not only a deep understanding of the game, but also a host of intangibles that sports writers struggle to describe. Take, for instance, his reputation for making strange faces in the heat of the moment.

“Though friendly with the media, Budenholzer has long eschewed the spotlight, as Pop always taught his staff to do,” reports Chris Ballard ’95 in Sports Illustrated. “Fairly or not, what Bud may be best known for—outside his coaching—are his facial expressions. The cameras started picking them up in San Antonio. His greatest hits include: Disappointed Dad; Dude-Cut-Me-Off-on-the-Merge; Man-Trying-to-Decipher-Legal-Document; and Just-Watched-a-Bull-Gore-Someone. Observers delight in captioning them on Twitter. An example, from Rob Perez of the Action Network: ‘I swear every time Mike Budenholzer is on camera he looks like he just watched the stampede scene from The Lion King.’”

At the same time, however, that naked authenticity seems to be one of the keys to his success as a coach. Ballard quotes Utah Jazz guard Kyle Korver, who played for Budenholzer in Atlanta: “One of the best parts about playing for him is watching him in the film sessions. But that’s how his heart feels, man! He cares so much and he’s just so disgusted with what’s going on in the court, but it’s so genuine. He’s just someone you want to follow because he’s not just a good person, but he’s great at his craft.”

Personally, Budenholzer had previously expressed his hope that the Coach of the Year award this year would go to his former assistant, Kenny Atkinson, for the job he’s done as head coach of the Brooklyn Nets.

“It is an incredible honor to be recognized by your peers, and that makes this award truly special,” Budenholzer said after the award was announced. “Thank you to my colleagues across the NBA, and most importantly thank you to our players and staff in Milwaukee. The players’ and staffs’ work this year has given our team and our fans a very special season.”