Pomona students and faculty take aim at some difficult problems in medicine and mental health.
May 9, 2019  by Staff

Most of the research projects undertaken by students at Pomona, with the support of or in collaboration with faculty members, are of the kind known as “pure research”—that is, their aim is to add new knowledge to a field of study, not to pursue a specific application. Occasionally, however, those projects cross over into “applied research,” aimed at solving a specific problem in the real world. The following are illustrations of three such projects, all aimed at finding new solutions to problems in medicine or mental health.

View the full, two-page Diagnosis by Breath infographic as it appeared in the print edition.

For centuries, medical practitioners have been able to diagnose certain ailments simply by smelling the patient’s breath. That, says Professor of Chemistry Chuck Taylor, is due to volatile organic compounds (VOCs) that, when breathed out, provide an identifiable signature of the guilty pathogen. That’s what led Taylor to think about the problem of hospital-acquired pneumonia, which is particularly deadly among intubated patients. Would it be possible, he wondered, to create a diagnostic tool that uses those VOCs to detect infections—and to identify the specific bacteria involved—so that they can be treated in a timely fashion? Since then, Taylor and students in his lab have been hard at work creating the knowledge base for developing such a tool. Eric Garcia ’19 is one of the many students who, in recent years, have helped move this research project forward. Eric’s role has been to try to understand the properties of certain lens-coating polymers that also happen to be very good at absorbing airborne VOCs so that they can be released for testing. There’s a lot of work still to be done, but here’s how Taylor and his students hope it might eventually work:

A bacterium such as Staphylococcus aureus infects the lungs of an intubated patient and begins to release signature VOCs.

Some of those VOCs are trapped in a filter in the patient’s breathing line.

The filter is replaced daily and taken for testing.

The VOCs are released from the filter and tested in a Raman spectrometer, revealing the VOC signature for S. aureus.

A doctor gives the patient an antibiotic known to be effective against the identified bacterial strain in time to save a life. 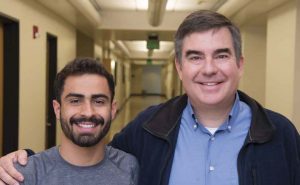 View the full, two-page Autism and Virtual Reality infographic as it appeared in the print edition.

With a sister on the autism spectrum, neuroscience major Cynthia Nyongesa ’19 has a long-held interest in the widespread neurological condition, which affects the way a person interacts with the world. So when she read about the effectiveness of virtual reality (VR) therapy in a range of other conditions, she wondered if autism could be added to the list. Working with the Center for Autism and Neurodevelopmental Disorders in Santa Ana, California, and with the support of Neuroscience Professor Richard Lewis, she has developed a pilot study to find out. The advantage of VR therapy, Nyongesa says, is that its totally immersive environment can be used to simulate realistic scenarios that couldn’t be used in the real world. “Like going through airport security, for example,” she says. “You couldn’t physically take a subject through TSA—you couldn’t get approval for something like that—but you can simulate it in VR.” And to determine whether the therapy is working, she plans to use before-and-after brain scans to show whether key parts of the brain are more active. Here’s how the study might work:

The subject undergoes an evaluation, including brain imaging, to measure brain activity in key areas of the brain associated with autism.

Over the course of several sessions, the subject dons VR equipment programmed to provide an immersive, simulated experience.

Each VR experience requires the subject to interact in realistic situations that challenge the parts of the brain dealing with such functions as social interaction and emotion recognition.

A final brain scan, along with behavioral testing, measures whether the therapy has resulted in increased activity in those key areas of the brain. 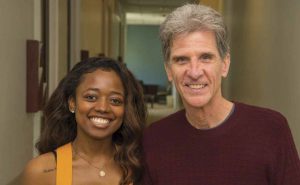 View the full, two-page Depression and Social Media infographic as it appeared in the print edition.

Caroline Chou, a Claremont McKenna College senior completing her major in Pomona’s computer science program, knew she wanted to do her senior thesis on a subject that incorporated health and computer science. Based on prior research showing a connection between certain indicators in social media and an episode of depression, Chou wondered if she could use social media to create an app-based support tool for therapists, psychiatrists and other health professionals who are working with people suffering from depressive disorder. With the support of Pomona College Assistant Professor of Computer Science Alexandra Papoutsaki, Chou spent the last semester designing the various interfaces of an app that would, when completed, provide an analysis of public portions of a patient’s Twitter usage, giving the clinician a heads-up to possible depressive episodes. Here’s a fictitious scenario showing how it might work:

Dr. Kay recommends that his patient, Josie, use the app to analyze depression-related patterns in her Twitter usage.

Dr. Kay logs in to look at the patient’s monthly report for January and sees a spike in depression-related indicators during the second week of the month.

During Josie’s regular therapy session, Dr. Kay uses the report to jog the patient’s memory about significant events of that particular week.

Josie tears up as she remembers that week, when her dog was seriously ill, and as a result, her therapy session becomes more productive. 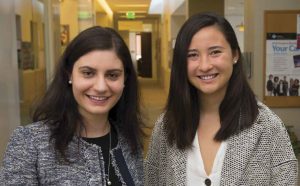