Zooming Past the Stigma of OCD

The New (Ab)Normal in Mental Health
December 3, 2020  by Robyn Norwood 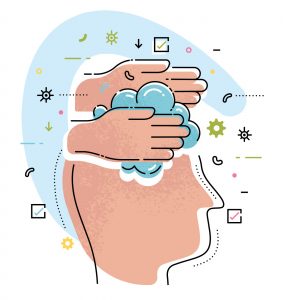 More serious, the Centers for Disease Control reported that drug overdose deaths were on a record pace, perhaps exacerbated by isolation and difficulty accessing treatment. The CDC also reported that the percentage of people surveyed in June who said they had seriously considered suicide in the previous month had more than doubled compared to an earlier survey.

Still, there may be silver linings that emerge from the pandemic in terms of behavioral health care. “I think in many ways, this pandemic has destigmatized mental illness because it’s talked about so much more frequently,” says Stephen Smith ’17, founder and CEO of NOCD, a telehealth company that provides face-to-face online sessions with licensed therapists to patients with obsessive-compulsive disorder. “I think the more we talk about mental illness and the challenges that people with mental illness face, the less stigmatized it becomes,” Smith says.

Besides normalizing openness about mental health, the pandemic has brought telehealth into the mainstream. Almost everyone from kindergarteners to grandparents has been on a Zoom call at this point, so the routine has become familiar. Physicians now use video calls for consultations that don’t require lab work or physical exams. Yet for mental health therapy, an online session can be even better than an in-person session. Evening and weekend appointments are more readily available to accommodate work or school schedules. And no longer must someone seeking help worry about being seen entering a psychiatrist’s or therapist’s office—or worse, sit in a waiting room with an acquaintance in awkward silence.

“We’ve seen that people are more likely to seek treatment online and open up faster,” Smith says. “It just feels less taboo for them.”

The bad news and good news is that business is booming for NOCD—pronounced “No OCD,” which in addition to therapy provides online support, including peer communities and self-help tools. “During the pandemic, growth has spiked twofold,” says Smith, whose company recently raised $12 million in funding to expand its services to all 50 states. Just a year ago, the startup he founded while still at Pomona was operating in only three states.

In depicting OCD, popular culture tends to focus on the meticulousness of a TV character like Monk or the contamination obsessions that cause compulsive hand-washing, but the disorder has many subtypes, involving various kinds of intrusive thoughts—including unwanted sexual, religious or violent thoughts—that result in compulsive behaviors performed to reduce stress.

Yet at a time when all of us are washing our hands for 20 seconds as recommended by the CDC, a person with OCD worrying about getting sick or infecting a vulnerable loved one might take it further.

“What many with contamination OCD will do is wash their hands until they bleed, to make their fear go away,” Smith says. “They also might go to a nearby clinic or to the ER to take tests and ensure that they aren’t ill, in order to prove with 100% certainty that they won’t cause their loved ones to become deathly sick. They do these actions in attempts to stop the crippling fear and reduce the corresponding anxiety, ultimately making their symptoms worse.”

NOCD therapists specialize in exposure and response prevention (ERP), a form of cognitive behavioral therapy most often recommended for treatment of OCD. ERP works by intentionally exposing people to situations that provoke their obsessions and distress while preventing the compulsive responses. Yet the model Smith has created has potential for many types of behavioral health issues.

“We’ve learned that using technology to treat people with mental illness is actually very effective,” he says. “Going forward, as we step out of the pandemic, we’re actually going to be able to use more technology to get people better. And that allows us to break down barriers that would typically prevent people from getting better in the past.”