Rewriting the Rules of Dating 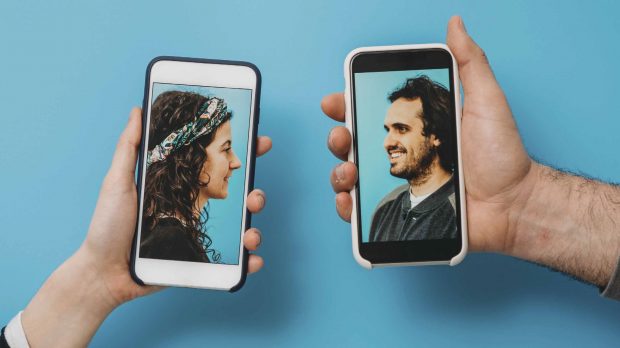 Dating has always been fraught with emotional pitfalls. Even before the pandemic hit, in an October 2019 survey of singles by the Pew Center for Research, two-thirds of all respondents said their dating lives were going either “not too well” or “not well at all.” Almost half (47% to be exact) said they believed dating was harder than it had been a decade before.

That was before quarantines and masks and social distancing added a whole new level of complication. Before everyone’s lives moved almost entirely online—including, for many, the trials, disappointments and potential joys of dating.

Online dating services are nothing new, of course, but they’re clearly on the rise as isolation and curiosity continue to drive singles across the country to dating apps. Match Corp—which controls 45 dating brands and more than 60 percent of the dating app market, including such well-known apps as Tinder, Hinge, Match and OKCupid—reported a 15 percent bump in new subscribers during the second quarter of 2020 alone.

Among those trying dating apps for the first time last spring were Will Swanson ’06 and Marianna Heckendorn ’16.

Heckendorn had a couple of Sagehen friends who had used Hinge, and she enjoyed hearing their stories, but she’d never really been tempted to try it herself. Then the pandemic came along, and she decided to take the plunge. “I was unemployed and a bit bored,” she recalls, “and also, I was, like, ‘I want to meet some new people.’ And so, I wasn’t really looking for a relationship. Just chatting with people and meeting them. And also just, kind of, out of curiosity—like, ‘What is this dating app?’”

For Swanson, trying a dating app seemed like a natural extension of the rest of his increasingly online life. He chose OKCupid because it offered more information than most sites. “It’s not one of the swiping ones—like Tinder,” he explains. “Well, yeah, you can swipe with it, but it’s more fleshed out than the ones that have just, like, pictures and then a quick little blurb.”

The ability to flick through a series of photos as you assess them for attractiveness—a kind of speed-shopping known in the industry as “swiping”—is a common feature on most dating apps. But counterintuitively, the combination of dating apps and pandemic quarantine seems to have had an opposite effect on dating in general. In many cases, it seems to have slowed things down.

A resident of Seattle, Heckendorn was visiting her parents in Massachusetts when the lockdown began. So when she decided to try her luck with Hinge, she focused on guys back home. That’s how she met Javier.

“Javier and I met just a couple of days in and pretty immediately dove into some really interesting conversation,” she explains, “We tested it for about a week and then had a phone call, and I think at some point, I explained that I was in Massachusetts and not Seattle. And he’s funny. He was like, ‘What the heck?’ And he wasn’t mad or anything, but he was surprised. And I didn’t even think of that being an issue because I was thinking, ‘Well, if we were in Seattle, we wouldn’t see each other anyway because of COVID.’”

Whatever the main reason—COVID or being a continent apart—they took it slow, not meeting in person until five weeks later, when Heckendorn flew home to Seattle. But even so, Heckendorn believes that their relationship actually deepened more quickly because of the pandemic.

“We’ve actually gotten really close a lot faster than I normally would have,” she says. “I think partly that’s because there isn’t a lot else to distract ourselves with, and also, there’s a level of just, like, the only thing we can really do is hang out and talk. It’s not like going to a concert or going out to eat or even hanging out at friends’ houses. A lot of our dating is conversation-based, which means we’re getting to know each other pretty well.”

Similarly, it was early May when Swanson first noticed Ruth Siegel’s profile on OKCupid and sent her a message, using the app’s chat feature. From back-and-forth chat messages, the relationship progressed first to phone calls and eventually to Zoom dates.

“He wanted to go straight to Zoom,” Siegel remembers, “and I was like, ‘I don’t know. That’s a little fast for me.’”

They didn’t agree to meet in person until more than a month later. “By then, I knew all kinds of things about Ruth’s family,” Swanson says. “She knew about my family. We’d had a long time to get to know each other before there was even the possibility of hugging each other or touching each other.”

A Question of Trust

“I think it is quite a conflict that people who are single are in—young adults and older adults,” notes Professor Emerita of Psychological Science Suzanne Thompson, who has studied how people react to inconvenient health warnings. “And it’s all the rewards of dating and relationships—the social contact, the physical closeness, sex—and, on the other hand, you could be exposing yourself to a serious disease. So it’s really quite a quandary to be in, and certainly, based on research I’ve done over the years on denial, in those situations, it’s very tempting to assume that this is a safe situation.”

Neither Swanson nor Heckendorn, however, took the decision to meet in person lightly.

Heckendorn lives with four housemates, so she first sought their approval before bringing Javier into their shared circle. “I definitely had to check that with them, and they were like, you know, ‘We have to trust your judgment.’ They had a rule that everyone could have one plus-one. So it was basically me, the four housemates, and then everyone’s plus-one.”

Before finally meeting in person, Swanson and Siegel took some time to work out the ground rules. “One of the things we had to discuss was how we were going to manage physical contact,” Swanson says. “Like, were we going to be able to hug each other on our first date after having talked for a month? And were we going wear masks? How were we going to navigate that stuff?”

“And if we don’t wear masks,” Siegel adds, “then how are we acting outside of dating each other? Like, how are we interacting with the world so that we can feel confident that we’re not going to infect each other—that we can have trust in each other when we’re still getting to know each other?”

“And so I think we erred on the side of caution,” Swanson concludes, “but when it came to dating, we decided to just go ahead and incorporate each other into our social bubbles.”

Looking back on their own experiences, Swanson, Siegel and Heckendorn all agree that there were some real advantages to online dating during a pandemic. For one thing, the inability to get together in the flesh removed some of the awkwardness and complication of normal dates. “I find a lot of the dating rules to be a little confusing in the first place,” Swanson admits. “So one of the nice things about this is that there is kind of a reset. And we had to talk about everything and make everything explicit.”

Siegel adds: “It really takes away a lot of the pressures of dating in certain ways. And then there’s no expectation for physical intimacy before you really get to know the other person, which I also think is, like, a cool aspect of it.”

In fact, they say the challenge of getting to know each other without breathing the same air pushed them to be more creative. “The templates were basically erased,” Swanson says. “So you had to come up with your own template for what a date is. And that was interesting and kind of fun, in a way. And so I think it was, like, a good way to get to know each other outside of all the weird pressure that can sometimes be loaded onto dates and a way to see the other person instead of how this person fits into what you were expecting in a normal date.”

For Swanson and Siegel, that inspired a series of themed Zoom calls during which they would watch marble racing together or play show-and-tell with a framed artwork or a favorite item purchased abroad. For one date, they set themselves the task of making the same complicated cocktail to drink together at opposite ends of the Zoom line.

Heckendorn has now become an advocate for dating apps. “I think I actually have sold a lot more people on online dating,” she says. “I go to church with, like, a lot of folks, and I think there’s a feeling, always, that online dating is just about hookup. And it’s really not. There are a lot of people who are looking for a sincere relationship.”

But for now, at least, her own online dating experience is over. “Javier and I met within days of signing on to the app,” she says, “and then we both deleted the app two weeks later. Hinge’s tagline is ‘Designed to be deleted.’ And, at least in our case, it worked out really well.”