The New (Ab)Normal in the Economy
December 3, 2020  by Marilyn Thomsen 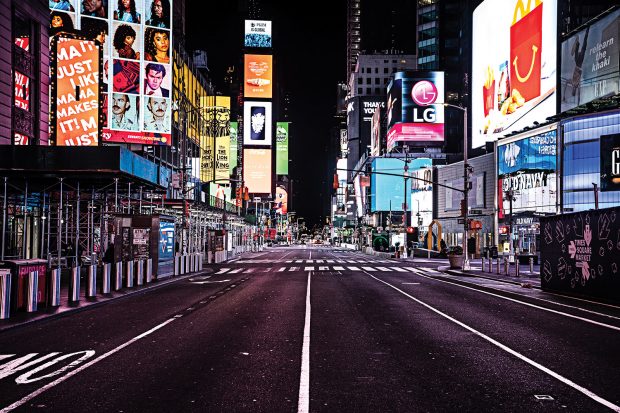 Images of an empty Times Square at 8PM during the COVID-19 crisis.

Thurgood Powell ’10 recalls walking through Times Square at 8:30 on a Saturday evening last July. A newly minted MBA from Penn’s Wharton School, he was starting a job at Goldman Sachs in New York. “It was really, really bizarre,” he says of the scene. There were a few homeless people wearing masks and gloves, some police on regular patrol—and no tourists. What he remembers is that “the lights felt overpowering. There are just so many of them. You don’t notice until that’s the only thing there.”

At some point—a study by McKinsey & Company estimates it is most likely to be in the second half of 2021 or later—the U.S. will reach herd immunity in the pandemic, allowing some kind of “normal life” to resume, to our great relief. Restaurants will fill up. Students will learn in person again. The lights will go on as workers return to megacity offices coast to coast and around the world.

Or will they? Will a few superstar cities like New York still dominate, post-pandemic? Or will work-from-home continue and make possible an exodus to places less crowded and more affordable? Is globalism dead? What will the new normal in the economy look like?

While some might think the sudden supply-chain disruptions and closed international borders of the pandemic year might take the luster off globalization, Manisha Goel, associate professor of economics at Pomona, says, “I’m a skeptic about that.” The reason why goods in various stages of production have been manufactured in multiple countries and shipped to markets around the world is because it was cost-efficient. “As long as the pandemic is not going to occur every three or four years, people will want to go back to the way they used to do things because that is what made the most rational sense,” Goel believes.

“COVID has accelerated trends,” says Powell, an associate in Goldman Sachs’s Merchant Banking Division and a member of the Urban Investment Group’s acquisitions team. “Like delivery. A lot of us use Amazon, but I’d never gotten groceries delivered. Now I can’t imagine not having groceries delivered. I just have to go to my phone and type in what I want.”

Yet there is a price for this convenience, often paid by small businesses. Fernando Lozano, chair of Pomona’s Department of Economics, sees a concerning trend in the closure of small and medium-sized businesses during the pandemic. “Larger firms have increased market share,” he notes. “Less people are accumulating assets. The distribution of wealth becomes more and more unequal.”

Industry consolidation, as smaller players are squeezed out, also increases the power of industry leaders to hire workers with lower pay, less benefits and worse conditions, says Lozano. “Whenever large firms increase their market share, they increase their own bargaining power.”

Goel describes a potential K-shaped post-pandemic recovery as top earners, many of whom can work from home, do even better, while those below them on the pay scale fall farther behind. She believes future tax policy needs to be more progressive. “The marginal tax rates for the rich should not be lower than for the middle- and lower-income households,” she says. “They should be substantially higher. The trickle-down policies haven’t really worked.”

Four months into his new job at Goldman Sachs in New York, Powell has never been to the office. He is part of the huge cohort of workers for whom “Zoom” is now both proper noun and verb. “I’m working from home, doing everything I would do in the office. I’m using a technology that makes it so I have the same desktop I would have in the office,” he says. “A lot of businesses,” he notes, “are thinking, ‘Do we need all this office space?’”

COVID-19, Powell believes, is also making employees rethink their own housing situations. Some are asking, “Why am I paying $4,000 a month for a 900-square-foot apartment with a screaming child in the bedroom next to me?” he remarks. For some slice of those now working remotely, the answer is to move to a place like the Hudson Valley or North Carolina or Reno.

Work-from-home, if it becomes widely accepted long-term, offers potential benefits for women, whose workforce participation during the pandemic has dropped to 1987 levels, Goel says. A vital need is accessible, quality childcare. Without it, she says, women dropping out of the workforce “may end up being the new normal.”

Academia, like the rest of the economy, has faced major adjustments in the transition to work- and learn-from-home. “In today’s world, what is the value of the physical space?” asks Erika James ’91, dean of Penn’s Wharton School. “I personally believe that the value of physical space resides in the ability to create community and culture and sociability, which also drives performance,” she says. “Zoom and Microsoft Teams and all these platforms are great for providing a mechanism to converse and to exchange ideas, but sometimes those ideas happen most creatively when you can build on a thought someone else has, or when you have a thought and walk down the hallway to step into someone else’s office and say, ‘I’ve been thinking about something. I want to run this by you.’ That option doesn’t really exist with these online platforms.”

As a member of California’s newly formed Council of Economic Advisors, Lozano cannot reveal the group’s confidential discussions. But, he says, “it is safe to say all of those in the council are really concerned with equity, with social justice, with how to alter the very perverse consequences of the pandemic.” One area he singles out as an urgent need in the new normal economy is equitable access to broadband so that students and employees don’t have to go to McDonald’s to get online for school or work. Universal health care is another essential change, he believes, in the shadow of a pandemic in which laid-off workers not only lost jobs but their health insurance as well.

Both Lozano and Powell see merit in universal basic income—an idea championed in the 2020 presidential primaries by Andrew Yang. Lozana disputes the idea that “if you pay people, they won’t have incentive to work,” saying that argument “has been refuted over and over.”

The political will to bring about such major changes in access to technology and in the social safety net may well come from young adults in Powell’s age group or the current Pomona students Lozano teaches. One of them is Erika James’ son, currently a freshman at Pomona. “This moment in time has so fundamentally changed his trajectory in some regards, and what he cares about, and what’s important and what’s not important,” she observes. “I think that will last a lifetime. This is a defining moment for a generation.”

Powell notes that millennials, born between 1981 and 1996, have already faced four huge challenges in their relatively short working lives—the Great Recession, housing inflation, wage stagnation and now COVID-19. He tells of four friends, three of whom recently lost jobs—a restaurant manager, a flight attendant and a construction worker. “They feel they can’t catch a break,” he says. People he knows who have never taken an interest in politics were planning to vote this year. “In the next eight to 10 years, I think you’ll see an FDR-type New Deal,” he predicts.

Indeed, it is the generations coming into their own that give people like Lozano and James and Powell reason for optimism. “The people joining the labor force right now, I think they are more aware, not only of the environment but of those around them,” says Lozano. He sees in his students “a large sense of kinship and also a sense of political activism to make things better.”

“It’s so easy to frame what we’re currently experiencing as negative and bad, and it is for so many reasons, especially for people who have been physically affected by the pandemic,” says James. “But it is in these moments that innovation occurs, and the world makes shifts that, over time, are really positive.”

Change, James notes, “doesn’t feel good in the moment. But there will likely be a day, however many years from now, where we look back on this time and can’t believe how backward we were. ‘How could we have ever thought or acted or done those kinds of things?’

“Because of COVID,” James concludes, “we’ve had to innovate in new ways that are fundamentally going to change our future. We can’t predict what they are now. This is one of those defining moments in history, and that’s a good thing. There will be good that comes from this. We don’t know what it is yet.”