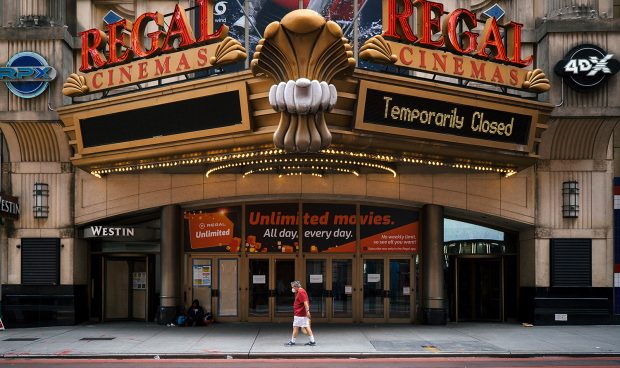 Manhattan, New York. August 26, 2020. A man wearing a mask walks in front of a temporarily closed movie theatre on 42nd street in Midtown.

We all have our own memory of the moment when our world abruptly shut down: the cancelled trip or postponed birthday party, the day the office or school announced it was closing its doors. The way veteran film producer Linda Obst ’72 recalls it happening in Hollywood is that “Kobe’s plane went down, and everything went down with it.”

“That was the L.A. zeitgeist horror,” she says of Bryant’s death in a late-January helicopter crash. “And then all of a sudden, we were told, no reason to come into the office. You all can work out of your homes. The next thing I knew, I was on a Zoom call—and, of course, I didn’t know what a Zoom call was.”

For Aditya Sood ’97, it was a different celebrity who marked the moment: Tom Hanks’s COVID diagnosis happened the same day that Sood and his colleagues at Lord Miller Productions had agreed to send their staff home for the week and suspend the productions they had in progress—what felt like just in case, but turned out to be just in time. “We had already decided, but there was something about that that was so earth-shattering, particularly in Hollywood,” he says.

The pandemic came at what was already a tense moment for the film and television industry: The imperatives of an international business and the advent of streaming had already been producing creative, financial and technical upheavals, threatening the multiplex model and the dominance of the traditional movie studio. And yet in lockdown, what is there to do but consume whatever content we can get our hands on? Netflix alone added nearly 16 million paid subscribers globally in the first quarter—double the number it had predicted for that period. That’s a whole lot of money to put toward ordering new shows.

The past year has posed unique challenges and offered unique opportunities to the industry, so we consulted Obst and Sood, both of whom have multi-decade careers under their belts, about how lockdown has shaped Hollywood and what the consequences of those changes might be in the years to come.

All of Obst’s projects were in development in March, she says, so there were no sets to shut down. Still, she notes, since then it’s been hard to move those projects forward when the options for releasing them are so limited. “It’s very easy to keep things in development in the best of circumstances,” she says. “So now, when there’s a real reason not to give a green light… We were in a very productive swarm of shows getting made before this happened, and now much less is getting bought than before.”

That’s in part, she continues, because while sets are slowly opening back up again, they’re more expensive than ever to operate, thanks to the need for COVID plans and protocol supervisors, as well as testing and PPE. That means there has to be a lot of obvious financial upside to a project for it to be worth kicking into gear. “It was very easy for Nicole Kidman to get The Undoing back at HBO Max, because it’s what HBO Max depends on for you to order a subscription,” she says by way of example, adding that Disney’s The Mandalorian is in a similar position. “If you’re part of the mandate of a new streamer, you can get ordered. But if you’re not part of that mandate, Netflix doesn’t need you.” And if you’re hoping for a theatrical release, for now, there’s nothing doing.

Hollywood execs have long been worried about audiences preferring to stay home and stream rather than pay for an expensive movie theatre ticket (plus parking and popcorn), and there’s been some concern that lockdown will only accelerate that trend. But Sood is bullish about the future of movie theatres. “I think that people are going to come out of this really craving that large communal experience in a way they were maybe taking a little bit for granted,” he says.

Plus, “there’s something different about watching a movie in a theatre. Not just the big spectacle movies either. I remember seeing The Big Sick at the Cinerama Dome at the ArcLight, which is not a movie you think you need to see on a 50-foot screen. But it actually was transcendent that way, because all of a sudden, these very simple, domestic, mundane things became larger than life. The dinner scene, when you see it with 300 other people—it’s just different than watching it on your home screen.”

The biggest challenge for Lord Miller as a company, he says, has been making sure that everyone feels connected to one another—that they aren’t just talking work but finding ways to make up for the office camaraderie that usually comes from the hours spent in the same room together. To that end, the company has instituted a virtual movie night. “We’re on our third go-round,” he explains. “Every Tuesday night we watch a movie together and text about it, and it’s been a really nice way for people to stay in contact beyond the work stuff.”

Both Obst and Sood have spent multiple decades in the industry, and while they’re worried about the changes the virus will bring, they also note that this is not the first time the movie business has weathered what feels like an all-encompassing sea change. To those who think the future of film is iPhone shorts released straight to Netflix, as well as the camps convinced that we’re in for a lifetime of mega-blockbuster tentpoles that require a crew of thousands to make, Sood says, “We’re never all or nothing. This has happened before: In the ’60s, the studios decided, ‘We aren’t going to compete with television, so we’re only going to make the biggest entertainments possible.’

“At the same time, you had this new guard of filmmakers that were making these really gritty independent-feeling movies, even though at that time they were still distributed through the major studios. There was a countermovement that started at the same time. Much of the industry today is grown out of that part of the business, more than the classic studio business.”

Obst also notes that, unlike those changes, which were industry-specific, the coronavirus is a global phenomenon. “There’s no technological issue that’s fundamentally changing the foundation of the movie industry,” she says. “It’s just that if we can’t get people back into theatres, they’re going to be watching everything at home. So the question is, how long will it take to get people back in the theatres?”

“This is a sea change for everyone,” she says, “that we have to go through with everyone else.”

The changes aren’t just limited to the limitations imposed by lockdown. Sood points out that one of the most lasting shifts in Hollywood might not come from any of those considerations but from the social unrest that simmered in the U.S. over the summer and the effort to diversify the industry that’s come out of it.

“I think there’s a recognition that behind the scenes, behind the camera, in front of the camera, in the executive suite, there is a real change that needs to happen,” he says. It feels like Hollywood is ready for “changing representation of whose stories are being told, and by who. And the thing that I tell everybody is: More than ever, authenticity is a prized commodity. If there was ever a moment to be how you are, to embrace the stories that you want to tell—this is the moment to really seize these opportunities.”

He knows that following a nontraditional career path might feel especially daunting at a moment when everything seems to be in flux, but he encourages those interested in entering the industry to “know it’s possible, and that there’s been a great democratization of access to this industry that’s happened.”

“But also know there’s a long way to go,” he adds, “and the more people land on the beachhead and secure positions, the more they can change that and be part of that conversation.”

He particularly hopes that some young filmmakers will find a way to tackle this period in their work, to offer modern audiences a way to digest what’s happening to us, but also to memorialize it for future generations. “I think there will be great art that’s made about [the pandemic],” he says. “Interestingly, there’s very little great art that was made about the Spanish flu—the culture seems to have forgotten that period of time, maybe because it was so traumatic. But it would be nice to have some of that to help inform our thinking today.”