With the announcement this week that Myrlie Evers-Williams ’68 will give the invocation at President Obama’s inauguration on Jan. 21, it’s worth taking a look back at her time in Claremont. 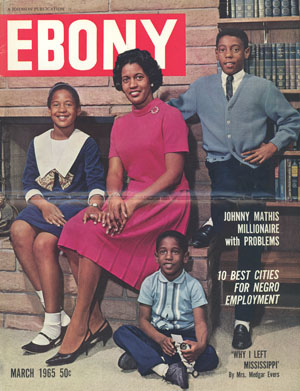 This year marks the 50th anniversary of the assassination of her husband, civil rights activist Medgar Evers, who was shot in the back outside their Jackson, Miss., home on the morning of June 12, 1963, while Myrlie and their three children were inside.

The next year, Evers-Williams decided to move to Claremont, as she recounted in a 1965 piece for Ebony magazine titled “Why I Left Mississippi.” In that piece, she wrote that she found purpose in speaking engagements, but was like the “walking dead” when she returned to her house and the memories. Ultimately, it was the welfare of her children, particularly her oldest son who was nine at the time, that prompted the move:

“They were awake that terrible night, and heard the thunderous roar of the death shot. They saw their father lying in a scarlet pool of blood as his life ebbed away,” she wrote. “… So it was that in the spring of 1964, while on a speaking engagement in California, I asked friends to ‘look around’ for a house for me.”

She chose Claremont, Evers-Williams wrote, for the college town atmosphere, and more specifically because it was home to Pomona College, where she enrolled. Her time in Claremont received widespread media attention — in 1965 alone her life here was featured in Look, Good Housekeeping and in the Ebony magazine cover story, as the Claremont Courier noted in a story about the stories.

Evers-Williams told Look that she had to wake at 3 a.m. to juggle the demands of school, raising kids and writing down her memories of Medgar. “Someone asked me what I wanted for Christmas,” she told the magazine. “I told them: a secretary.”

While still a Pomona student, Evers-Williams wrote a book (with Peter Williams), For Us, the Living. After graduating in sociology in 1968, Evers worked for several years at The Claremont Colleges, starting at the new Center for Educational Opportunity. In 1970, she ran for Congress as a Democrat, losing in the largely Republican district that included Claremont.

She went on to work for ARCO as national director of community affairs, served as a commissioner on the Los Angeles Board of Public Works and, in 1995, she was elected chair of the NAACP’s national board of directors. The next year, Pomona College awarded her an honorary degree and she delivered the Commencement address in Bridges Auditorium, where she had graduated nearly three decades earlier.