The clean computing quest of Jeremy Kepner '91 led to something bigger and greener than he ever expected.
March 28, 2013  by Malcolm Fleschner '91 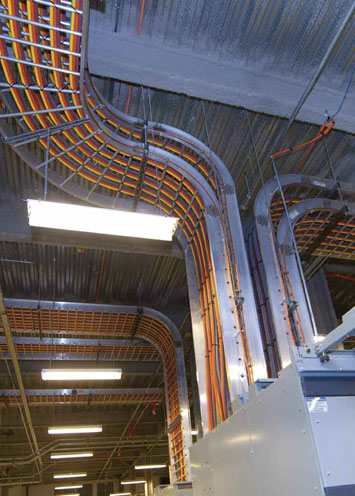 This iconic line from Jaws occurred to MIT Senior Scientist Jeremy Kepner ’91 on the day in 2004 when he realized that the modest new data center he and his team were planning to construct in converted lab space in the Boston area wouldn’t be large enough to handle the school’s ever-growing computing needs.

Often larger than city blocks, data centers house countless racks of computer servers that handle the exabytes (1 followed by 18 zeros) of data generated by all of our Facebook status updates, tweets, credit card purchases, blog posts, song downloads and the trillions of other data bits that travel the Internet. Tens of thousands of data centers operate around the globe, with the largest using as much electricity as a small city.

To handle MIT’s long-term computing needs, which involve processing everything from astronomical images and climate data to plant, animal and bacteria DNA sets and particle accelerator data, Kepner realized the university would need a data center 10 times the size of the facility under consideration. A quick calculation of the electrical costs (as much as $20 million per year) and the environmental impact (as much CO2 released per year as is typically emitted by a town of 10,000) forced him to think bigger—and greener. Spending the next year researching different approaches to power generation, Kepner traveled to Western Massachusetts and the post-industrial town of Holyoke, where he chatted with the local hydroelectric plant’s operator and supervisor. He discovered that a hydroelectric dam, once built, has very low costs because turbines last for decades and maintenance costs are minimal. Other benefits Holyoke offered included available land and a dire need for urban renewal. Convinced that hydroelectric was both the greenest and least expensive option, Kepner returned to MIT intent on persuading his fellow committee members to do something unprecedented: locate the university’s new data center in an old mill town 90 miles away.

What followed was a five-year journey of persuasion and coalition-building that eventually brought together Harvard, Boston University, the University of Massachusetts and Northeastern University, all of which faced similar challenges in handling their ever-growing data processing needs.

Also on board were Massachusetts Gov. Deval Patrick, who saw the political advantage in locating a data center in economically depressed Holyoke, and corporate sponsors EMC and Cisco Systems. Executive Director John T. Goodhue credits Kepner with both the insight and the persistence that helped make the MCHPCC a reality. “Like many great ideas, the MGHPCC has many fathers—and mothers!,” he says, “but Jeremy was truly there at the beginning, when he made the first scouting visit to Holyoke in 2004 and was part of the original study group that laid out the ideas that led to the creation of the MGHPCC.”

The 90,000-square-foot building, which was constructed on the site of an old textile mill, officially opened Nov. 16. The center is powered by water from the Connecticut River, while construction materials were culled from buildings that were demolished to make way for the MGHPCC. And while a typical data center consumes nine megawatts of power just to cool the sea of electrical equipment, the MGHPCC will cut that figure to just three megawatts, in part by circulating chilly New England air through the building during winter months. 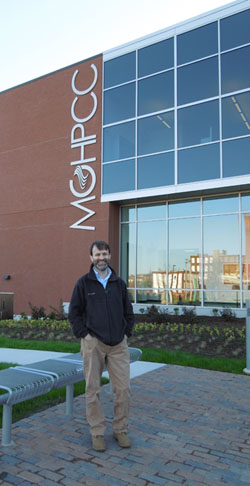 At the groundbreaking ceremony, Gov. Patrick said the facility serves as an economic development model for the state and the nation. Kepner, meanwhile, sees the MGHPCC as an example of how scientists can take the lead in working to counteract the potentially devastating impact of climate change.

“The issues associated with global warming are very technical, which makes it difficult to act decisively as a society,” he says. “… those of us in the supercomputing community who understand the environmental impact of supercomputers need to come up with innovative solutions to those problems and see them implemented.”

On a personal level, Kepner says the most rewarding moment came during a visit to Western Massachusetts with his wife, Alix Sholl ’90, and 11-year-old daughter Jemma a few weeks before the ribbon cutting. “On the way out of town I suggested to Alix that we go by the site so she could see it for the first time,” he says. “We drove past a warehouse and there it was, shining in the sun between the two canals. Alix was speechless. Eventually she turned to me and said, ‘I’m so proud of you!’ and gave me a big kiss.”