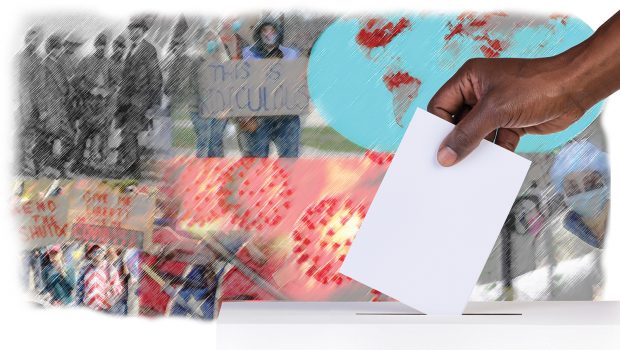 COVID-19 arrived smack in the middle of the semester I first started teaching Politics 142, Anti-Democracy in America. The pandemic shut down our class meetings, disrupting our normal ways of working together, but it fit disturbingly well into the content that we were studying.

The pandemic has laid bare the United States in 2020, as we encounter the public health consequences of deep social and political inequality, widespread economic precariousness, white supremacy, polarized and dysfunctional politics, hollowed-out government, and a scandalously inadequate health care system.

First, a little background. I’ve long meant to teach a course like this as a counterpoint to Alexis de Tocqueville’s Democracy in America, the 1830s study famous for its generous portrayal of American civil society. (“Among the novel objects that attracted my attention during my stay in the United States, nothing struck me more forcibly than the general equality of conditions.”) A bunch of events finally gave me the push: Donald Trump’s election in 2016, Danielle Allen’s Pomona commencement speech in 2018, and Daniel Ziblatt ’95 publishing How Democracies Die with his colleague Steven Levitsky that same year.

The Anti-Democracy course took on some hard topics, including the challenge of defining democracy in the first place, the building of the United States on slavery and settler colonialism, deep and polarized disagreements about who is an American and what the United States should be, historical and contemporary white supremacy, economic oligarchy, punitive economic and social policy, and corrupted and dysfunctional elections. The 14 amazing Claremont Colleges students in the seminar were up to the challenge, though. They did the readings, formed their own views, discussed their agreements and disagreements in our bi-weekly seminars and wrote ambitious papers.

Again and again, COVID-19 connected with the readings. In How Democracies Die, Levitsky and Ziblatt showed how anti-democratic political leaders all over the world commonly attack the institutions of government and challenge the legitimacy of professionals and experts. As the pandemic emerged in March, we learned the Trump administration had gutted pandemic preparation in 2018, and we watched as the President and other Republican leaders dismissed the warnings of public health officials and researchers around the world as a “hoax.”

We read several studies on polarization and the “culture wars” in the United States. The pandemic offered an immediate case study, as many conservatives politicized the quarantine and the wearing of protective face masks. In April, Vice President Mike Pence refused to cover his face even at the Mayo Clinic.

In The Second Founding: How the Civil War and Reconstruction Remade the Constitution, Eric Foner showed how the framers of the 14th Amendment struggled to defend elected governments from armed terrorists in the South in the 1860s. This seemed a part of America’s distant past until April, when armed “protesters” tried to storm the Michigan capitol as the legislature deliberated closing public facilities across the state to slow the spread of the virus.

The racial dimensions of the pandemic became obvious within weeks, as public health researchers published data showing higher infection and mortality rates among people of color in the United States. Students in the seminar had already read a variety of materials on white supremacy in the United States, and they couldn’t help but notice that virtually all of the anti-quarantine “protesters” in the news were white.

Rick Hasen’s newly published Election Meltdown seemed alarmist to some of us, as he warned about the fragility of U.S. voting systems. Then we watched the Republican state legislature and the Wisconsin Supreme Court overrule Democratic Governor Tony Evers’ plea to delay the state’s primary election, forcing residents to risk exposure to the coronavirus if they wanted to cast their votes.

Students read about the chaotic state of public health insurance and access to medical care in Jamila Michener’s Fragmented Democracy. This prepared them to understand reports about disparities in access to health care during the pandemic, particularly the research showing larger numbers of uninsured and untreated people resided in states whose governments had refused to enact the Medicaid expansion available under the 2010 Affordable Care Act (commonly called Obamacare).

In 2019, Jacob Hacker published an updated version of The Great Risk Shift, which focused in part on the dismantling of job security, unemployment insurance and pension guarantees in the United States since the 1980s. This book in particular struck a chord for the students in the seminar, who are about to enter the labor force in an economy devastated by the pandemic. As the semester ended, unemployment neared 15 percent, and bipartisan majorities in Congress targeted their first recovery legislation primarily at businesses and investors.

In short, the pandemic became part of our curriculum this semester. Again and again, COVID-19 taught us hard truths. In 2020, as the election nears, democracy in the United States is at best more aspiration than reality. At best.

Let me close on a personal note. After teaching about U.S. politics at Pomona College for more than half my life, I struggled with giving students such dark material during such dark times. But I was deeply grateful for the opportunity to work through this syllabus with those 14 young people twice a week this spring. In the face of everything, the students in the seminar remained engaged and committed, more than willing to face, consider, discuss and write about the implications of these readings (and the pandemic­­) for their own futures, and the future of the United States and the world.

We face daunting challenges, but those students give me hope.

David Menefee-Libey is professor of politics and coordinator of the Public Policy Analysis Program. He has been a member of the Pomona College faculty since 1989.