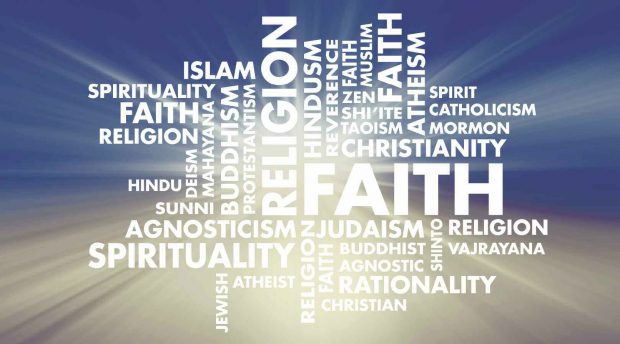 Pomona’s original seal, emblazoned with the words “Our Tribute to Christian Civilization,” adorned every Pomona diploma for almost a century. Appropriate in 1887 for a church-founded college where theology was part of the curriculum, it slowly became an anachronism, as the College cut ties with the church and drew students from many traditions. Steve Glass ’57 still laughs good-naturedly about receiving a diploma imprinted with that motto just before going to Bridges Hall of Music to be married in a traditional Jewish ceremony.

Over the years, as American culture grew steadily more secular, American colleges—once places for reinforcing inherited belief systems—became, instead, places for questioning them. I was reminded of this fact as I prepared for this issue, when a couple of students declined to take part because their parents weren’t yet aware of their evolving beliefs.

Just in the past decade, according to a study by the Pew Research Center, the portion of the “millennial” generation with no religious affiliation has grown from a quarter to more than a third. Pomona students may be slightly ahead of that curve, judging by the Princeton Review’s rather eclectic rankings, in which Pomona seems to be perennially listed in the top 10 for “least religious students.” (Last year, we were number nine.)

But another study, conducted at UCLA in the early 2000s, found that while religious affiliation typically declines during those college years, “spirituality”—defined as “an active quest for answers to life’s ‘big questions,’ a global worldview that transcends ethnocentrism and egocentrism, a sense of caring and compassion for others coupled with a lifestyle that includes service to others”—actually increases.

That’s one of the reasons why institutions across the country are beefing up offices that provide spiritual counseling and promote religious expression or community service. Here at The Claremont Colleges, for example, the Office of Chaplains recently appointed a new Muslim chaplain, who joins Catholic, Protestant and Jewish chaplains at the McAlister Center to support the needs of individual students and groups spanning a wide spectrum of beliefs.

Since 1914, Pomona’s gates have welcomed students who are “eager, thoughtful and reverent” and encouraged them to “bear their added riches in trust” for humankind. Today we may understand those words a bit differently than when they were first carved. We may speak about reverence for truth instead of reverence for a particular deity. We may discuss the ethic of helping others without framing it in a religious context. But Pomona students continue to keep the faith in their own individual ways.