Inside a medium-security prison in Norco, 5C students and incarcerated students study side by side in classes taught by Claremont Colleges professors.
March 4, 2020  by Robyn Norwood 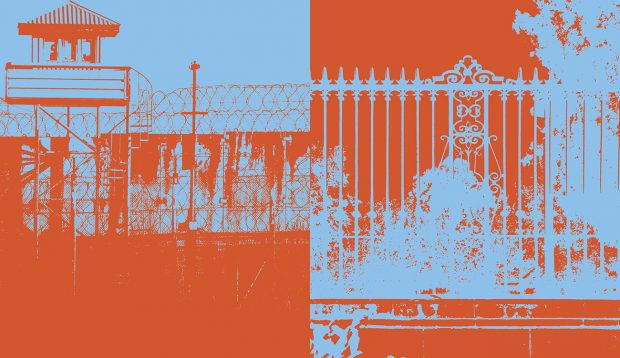 BEHIND FENCES TOPPED with razor-sharp wire, students from the 5Cs sit next to incarcerated students each semester in classes taught by Claremont Colleges professors at the California state prison in Norco.

They are part of the Inside-Out Prison Exchange program, an international effort introduced locally by Pitzer College in 2014 and expanded in 2018 to include courses from Pomona College and the other 5Cs. The classes inside the 3,600-inmate California Rehabilitation Center (CRC) are part of the groundbreaking Inside-Out program created by Temple University Professor Lori Pompa in 1997—an effort that took ‘outside’ undergraduate students into classes with ‘inside’ students serving sentences in Pennsylvania prisons. Since then, it has expanded to more than 150 colleges and universities at some 200 jails and prisons.

Education isn’t the only goal of the college-credit classes; it’s also an attempt to create dialogue between groups with profound social differences. But the inside and outside students are equals in the classroom: They read the same materials, complete the same assignments, earn the same college credit and in small ways start to echo each other. As one incarcerated student in Professor Jo Hardin’s Math 57 class, Thinking with Data, writes:

In the future I hope to organize communities that focus on sustainable, environmentally beneficial practices. With the skills I learned in this class I feel prepared to communicate and interpret complex scientific data in ways that are easily understood and enjoyable to contemplate. Also by broadening my interactions with young scholars I’m exposed to the issues pertinent to the change makers of tomorrow.

Ultimately, the differences are stark. The outside students get to leave after class and return to a bus where their cell phones and lives await. The inside students at the medium-security men’s facility will eventually be eligible for release, but for now their lives are confined by both fences and regulations. They answered questions about the program in anonymous handwritten responses, including this one from a student in Linguistics 114, a course on language and discrimination taught by Nicole Holliday, an assistant professor of linguistics at Pomona:

I thought I would just be an outcast for the rest of my life, but my interactions with the outside students showed me that not everyone will judge me, and maybe I’ll get to find a place I fit into society after all.

Being part of an “inside-out” class also makes me feel like a regular person, not an inmate. It is a welcome reprieve from the highly punitive correctional environment that I live in.

Being treated like a human and not a monster.

The buses leave The Claremont Colleges at 12:30 p.m. on the days of classes at the prison. Six courses were offered in fall 2019 and another half-dozen this spring, each meeting once a week. The students and professors must be cleared by prison security and undergo orientation, as well as being tested for tuberculosis before classes begin. They invest a full afternoon for one class, often returning to campus as late as 5:30. “Walking into the prison for the first time, it felt incredibly surreal,” says Pomona student Sarah Sundermeyer ’21. “But I think that feeling of trepidation dissipated as soon as we were inside the classroom with the other students. They were so warm and friendly and just open and willing to share in a way that I don’t know that I expected.”

An experience different from what they expected is a common refrain. “I guess it’s been more striking how unremarkable it is,” Hardin says. “You think, ’Oh, this is a really big deal.’ Everybody says it’s really impactful, and in some ways it has been. But in terms of the class structure and the class dynamics, it’s really just a class.”

“And that’s what you’re actually trying to do, right?” interjects Holliday. “Part of the innovation is treating people who are incarcerated like people—and that means treating them like students, for us.”

The courses are partly tailored for the setting, with Hardin’s data class focused on interpreting such information as census statistics and medical research, but also on the probabilities involved in DNA analysis of the sort used in criminal investigations and trials. Discussion is also an integral part of the model. “The topic was statistics and right off the bat people were saying, ‘I feel I’m reduced to a number in the system,’” says Ahana Ganguly ’21.

Holliday’s class examines linguistic prejudice in the educational system as well as the criminal justice system. “Every single inside student had a story about being told that they talked ‘ghetto’ or literally having the Spanish beaten out of them in school,” she says. “When people tell you your language doesn’t work because of their racism, you don’t use your language. And then what happens to you in school? It’s really, really powerful. And maybe in some small way, you know, what the program is trying to do is just restore a little bit of the dignity that they lost through the way they were treated in the educational system to begin with.”

“I think the greatest benefit actually—I hope—accrues to the larger society,” Holliday says. “What does a world look like when every judge, every lawyer, every politician has had a real human connection with someone that’s incarcerated? And we know our students go on to do wonderful things. They’re going to grad school; they’re going to law school; they’re going to be important and powerful. I want a generation of people that have had that experience and seen how fundamentally unfair our system is, that have the power to change it when they get out.”

Involvement in research or activism involving the criminal justice system is nothing new at The Claremont Colleges, with a decades-long tradition among many faculty, particularly at Pitzer. Pomona Professor of Religious Studies Erin Runions has facilitated writing workshops inside a women’s prison and teaches a popular course on Religion, Punishment and Restoration that is now part of the Inside-Out program.

But it was Pitzer’s Tessa Hicks Peterson—an associate professor of urban studies and assistant vice president of community engagement who also heads the Office of Consortial Academic Collaboration—who piloted the first Inside-Out course, Healing Arts and Social Change, which took place at CRC in the spring of 2014. Since then she has worked to spread this model to the other Claremont Colleges, with the support from the 7C Deans and many engaged faculty.

The expansion came with the support of a $1.1 million grant Pitzer received from the Andrew W. Mellon Foundation in 2018 and is now run by Pitzer’s Tyee Griffith, founding manager of the Justice Education Initiative. In fall 2020, Pitzer will become the first Inside-Out program in the nation to offer a pathway to a bachelor’s degree for incarcerated students, who previously only have been able to earn associate’s degrees. The first class of incarcerated students to earn bachelor’s degrees in organizational studies from Pitzer would be in 2022.

All of these are complex issues, of course, involved in crime and punishment. Even on the Claremont campuses, a club called the 5C Prison Abolition Collective staged a panel last fall examining the ethics of Inside-Out that included formerly incarcerated speakers as well as Pomona’s Runions, a longtime activist and Inside-Out professor. Some who support the dismantling or reduction of the prison system over traditional reform contend that the Inside-Out program makes participants complicit with the system itself.

“There’s an idea that this ‘makes the prison look good,’” Peterson says. “But the prison is not necessarily pushing for this: We are really advocating for it on behalf of those inside who have asked us to do it. We’re there because we’re invited; we’re there because it’s their right to education, just like anyone else’s. And the educational experience is really transformative and does often provide a level of agency, like any educational experience does. That in and of itself is what we hope will change the system—both girding the folks inside with that sense of agency and education but also girding our 5C undergraduates with knowledge about this system, that for many people they have a luxury to not have to know and care what’s happening in these facilities that are state-run, that our tax dollars are going to. So we’re complicit with these institutions, regardless of whether we’re teaching inside or sitting here ignoring them. Those of us involved feel like we’d much rather be complicit with a solution of educating ourselves about these institutions so that we can become better advocates. Because certainly, you can’t teach inside without having resulting very strong feelings about the prison-industrial complex. It’s just impossible.”

The ideas a professor or student comes in with are not often the ones they leave with, says Darryl Yong, a professor of mathematics at Harvey Mudd who serves as faculty liaison for Inside-Out.

“It’s so black and white at first for many students,” he says. “Then when they see it and experience it, they realize it’s way more complicated than they could have possibly imagined. I think that complication is part of the learning. You learn by feeling squeezed in both worlds. Even the experience of having to walk through the gate, walk to our classroom, just being in the space, understanding what people are subjected to, it opens your eyes.”

Pomona students and others say they walk away changed.

“I love that idea that learning could provide an escape, and education could provide a kind of inner freedom for them and for us as well, as Claremont students,” Sundermeyer says.