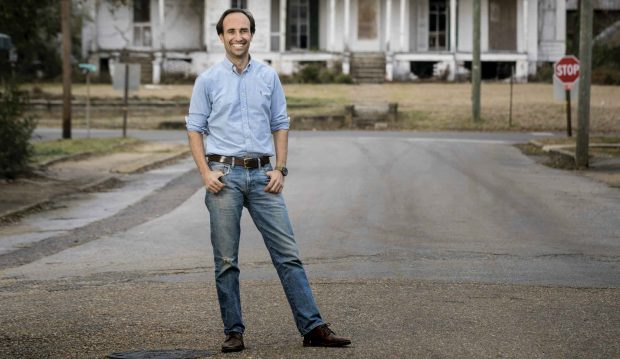 Dorsey on a street in Greensboro (All photos by Porfirio Solórzano)

The crisp winter air buzzes with activity one morning in early January: from construction at the historic Seay house to a pompom-making session at a nearby Victorian farmhouse to jokes and laughter in the converted kitchen of an old hotel downtown.

If you’re looking for a kudzu-wrapped cliché about well-meaning do-gooders who rescue a fading town and its impoverished citizens—well, this isn’t that.

“People have told the same old story over and over about Greensboro,” Dr. John Dorsey ’95 says. “This is a new story of potential and hope and movement forward.”

It’s the collision of past and present and future, all having a meeting in the middle of Main Street. In historic buildings downtown, brick residences serving as temporary office space and housing and a restored Victorian several miles away, Dorsey is leading a charge to provide a range of services through a series of community-based programs he founded under the name of Project Horseshoe Farm. These include adult and youth programs addressing mental and physical health, housing and after-school care, plus gap-year fellowships and internships for top recent college graduates from around the country.

His methods are creating a new model for the way mental health care and community health are addressed in communities while simultaneously helping reshape a thriving downtown and preparing the next generation of social entrepreneurs to create their own paths. 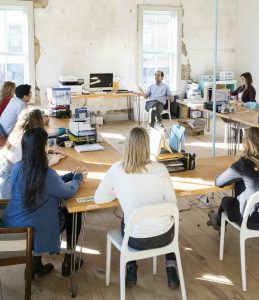 Dorsey conducts a meeting with the Project Horseshoe Farm fellows in a room that is undergoing renovation by students of the Auburn University Rural Studio architecture program.

However, part of him was pulling him to a more personal way of living and practicing medicine. A tip from a colleague at a medical conference led him to an interview at Bryce Hospital in Tuscaloosa, Alabama. While driving cross-country to begin working, however, he learned Bryce no longer needed his services. Unsure of what he would find in Alabama, he drove on to Tuscaloosa and took cover in the wake of Hurricane Katrina in a motel room.

His savings dwindling, he had to come up with a plan—and a place to live—fast.

“I stumbled upon a mobile home sales office in Moundville and asked them to rent me a mobile home. They sent me down to Greensboro and connected me with a local pastor and nonprofit director,” Dorsey remembers.

“It was a quintessential small town with interesting energy, and they didn’t have a psychiatrist,” he says. “That’s how I ended up here 12 years ago. There was no plan that I was going to Greensboro.”

And yet, this little town of 2,365 residents would turn out to be exactly the kind of community where Dorsey could carry out his grassroots vision of integrated, community-based health care—a vision that he developed in medical school while studying what he terms a “frustrating” disconnect between doctors and patients.

“‘Focusing my residency on community psychiatry and people on the margins really crystallized the mismatch: You have to understand the person’s housing, transportation, finances and relationships,” Dorsey says. “There’s a spectrum, and when you have someone who is homeless, in chaotic relationships or who abuses drugs or alcohol, a test in an ER or primary care setting won’t solve their issues. I wanted to set up systems to address the needs of the patients, particularly in underserved communities.” 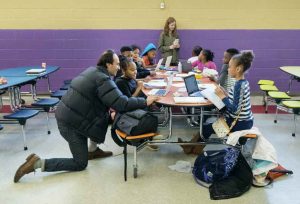 Dorsey visits with children at Greensboro Elementary School during an after-school program.

Since then, Project Horseshoe Farm has grown through a series of small steps, beginning with an after-school program for kids that met a community need. Then, in 2009, Dorsey began building a housing program for women with mental illness. He also selected his first group of three student fellows to spend a year partnering with the community and learning to take care of patients in a holistic way. He describes his success at attracting them to a brand-new nonprofit with no reputation in little Greensboro, Alabama, as “a miracle. We had great fellows right from the start and have grown ever since.”

As the project celebrated its 10th anniversary last year, it had expanded to encompass a range of other services as well, including the Adult Day program, a kind of community center where people come together for companionship and mutual support, and the Health Partners program, pairing individual fellows with vulnerable adults to help them navigate the complexities of health care and social services.

“Welcome to the Hotel”

Seeing is believing, so Dorsey offers a tour of downtown and Project Horseshoe Farm, starting at the old Greensboro Hotel property, donated to Project Horseshoe Farm in 2014 for use as a community center and project headquarters. Located right on Main Street, the old hotel was once listed as a historic building in peril, but now it’s being lovingly restored. One can see glimpses of its former grandeur in the embossed ceilings, pale mint walls and gleaming wood floors. w 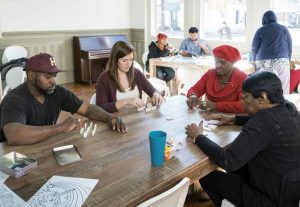 “There is such a rich, complex history here,” Dorsey says. His tone is reverent. In addition to being a hotel, the building also once housed a dress shop, a café and a sewing plant that employed some who now come through its doors as patients.

This morning, the place is bustling with students preparing a meal and guests in conversation. Kevin Wang, a first-year fellow from Northwestern University and future medical student interested in health care delivery systems, steps away from lunch preparations to describe his own experience here. “I was surprised at how willing people were to work with us, especially having no personal ties to Alabama. It’s a testament to the organization,” he says. “People know we’re here for them and understand we’re here to learn from them, and they’re willing to share. That’s really cool.”

Toward the rear of the building, retired nurse Jane Prewitt, known as “Nurse Jane,” organizes patient prescription trays with the assistance of Berkeley graduate Michelle McKinlay. “Until you truly get down here and walk with the people, you have no idea,” McKinlay says. “Walking through health care barriers with them and really getting to know people has changed me and helped me understand the issues better.”

Prewitt invites patients and visitors to sit in one of the outsized white Adirondack-style chairs that dominate the space, a striking change from the usual exam chairs or tables one might see in a doctor’s office. Her husband made them. Prewitt had brought one in to use and it was a hit with patients who found the chairs comfortable and easy to get in and out of. Another plus—staff found them easy to clean.

It’s one way the group has learned to meet needs with practical solutions. “You don’t have to be fresh out of college to understand,” Prewitt says. “You just wonder at how well people do with the minimal resources they have.”

The tour proceeds across rough-hewn floorboards and around paint cans and stacked chairs. Dorsey bounds up a flight of stairs obscured by a tarp and stands in the center of his future office. “I love the light,” he says, walking to a window to point out the corner of the room where sunlight streams in.

Administrative space is planned for the area next to his, and the closed-off third floor may one day serve as housing for students in the health professions.

“Having a community center in the heart of Main Street where people are welcome and supported is a wonderful testament to Greensboro. It’s one of Greensboro’s strengths,” Dorsey says. “In most communities, Main Street renovation is about stores and restaurants. But Greensboro has embraced having people who are usually on the margins come right downtown. It’s not just about commerce. It’s about the soul of the community.”

“Build Around What is Beautiful”

Being situated on Main Street also allows the students to get a sense of how the community’s pieces fit together. A few doors down, a new sandwich shop and gym have opened. Across the street is the old opera house reimagined as event rental space, plus a specialty pie shop. The Hale County library and mayor’s office are within walking distance, and a technology center offers residents Internet access. 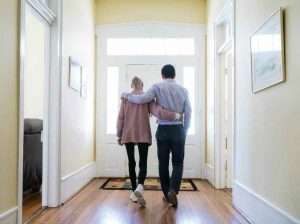 Construction equipment and stacked wood slats, piles of pale sawdust and brand new buckets of Ultra Spec 500 paint sit amid aged flooring and exposed beams. But one can see the dream taking shape throughout.

In another room upstairs, 10 church pews line one wall and windows look down over the grounds where a courtyard is being planned with the help of the Auburn University Rural Studio architecture program. “We imagine having community performances there,” Dorsey says, pointing.

Downstairs, he foresees a space where patients can gather while waiting to be seen. And he’d like to turn the grand old ballroom at the rear of the building into a fitness center for program participants. Its filigreed mantels, honeycomb-patterned floors and ornate ceiling hint at the elegant atmosphere guests once enjoyed. In many ways, that legacy of graceful hospitality and comfort is being continued.

Dorsey is quick to acknowledge that his efforts are part of a network of engaged leaders working together. He also considers the relationships he made at Pomona College instrumental. “Professor Richard Lewis worked with a group of us to start a neuroscience major and created a wonderful community. I wouldn’t have gotten into medical school without that support.”

His continued Pomona connections have also been important, Dorsey says. Tom Dwyer ’95, a founding and current Horseshoe Farm board member, was Dorsey’s first-year roommate in Harwood. “We’ve had several past Horseshoe Farm fellows who were also neuroscience majors at Pomona and who had some of the same classes and professors I had.”

For the future, he anticipates exploring opportunities to replicate Project Horseshoe Farm’s successes in other small towns, but he urges humility for anyone looking to improve a community. “The idea alone is not enough. The missing piece is understanding who people are and what they want and developing trust in order for it to work. So often people look at the deficits. But you can’t build around deficits. You build around what is beautiful and strong in an existing community.”

Dorsey’s love for Greensboro and its people is evident as he speaks. “Here you have all this richness and the complexity of the culture. It’s humanity—in one word,” he says.

He gestures to the inviting shops and businesses lining Main Street, “Ten years ago, 80 percent of this was boarded up. Now 80 percent of it is being used. People are sensing that ‘Hey, something is going on!’ You may ask, ‘How in the world is that happening in Greensboro?’