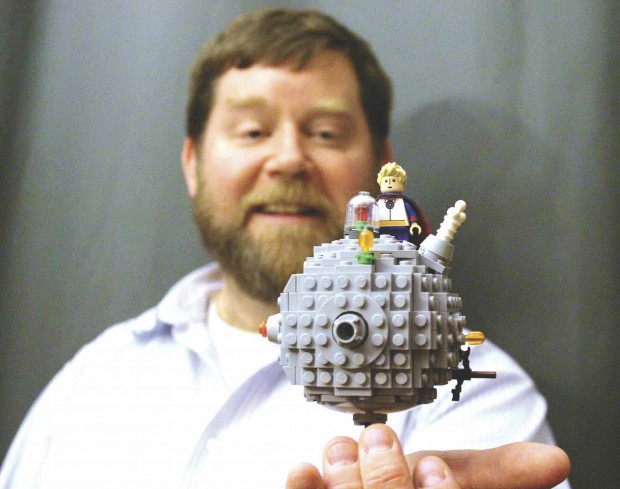 ON THE MORNING of July 10, Colin Walle ’91 needed only 1,997 more votes to see his dream come true—or at least, to take a very big step in that direction.

No, he wasn’t running for office. This was something more personal. His prize creation—based on a happy confluence of a children’s toy that he had never given up and a favorite book about never losing your inner child—was hanging in the balance.

Based on Antoine de Saint-Exupéry’s Le Petit Prince, Walle’s proposed Little Prince LEGO project had accumulated 8,003 votes on the LEGO Ideas website. He now had 78 days left to hit 10,000. Reaching that threshold by the Sept. 27 deadline would mean that his pet project would move from a LEGO-lover’s fantasy to actual consideration for development and marketing as an official LEGO set.

Walle says he doesn’t remember a time when he didn’t play with LEGOs. “We had LEGO sets when I was a kid that predated my birth,” he recalls. But unlike most adults, Walle never put away his favorite toy. As a self-described “LEGO enthusiast,” he visits lots of aficionado websites, and one day he happened across one called LEGO CUUSOO, based on a Japanese word for “fantasy.” The site would later morph into LEGO Ideas.

“Basically, they have these different projects that anybody can submit,” he explains, “and then if they get enough votes, the LEGO Corporation will put them into a review stage and then consider making a real set based on your proposal.”

At the time, Walle happened to be reading The Little Prince to his son for the second time. He had first read the book in high school, but it was at Pomona that he really fell in love with Saint-Exupéry’s gentle fable. He even quoted some of the book’s most famous lines in his senior yearbook. (“‘Goodbye,’ said the fox. ‘And now here is my secret, a very simple secret: It is only with the heart that one can see rightly; what is essential is invisible to the eye.’”)

So maybe it was inevitable that two of Walle’s fascinations would come together in a brainstorm. “The book was sitting on the banister upstairs, and I had this little LEGO Death Star sitting in close proximity to that,” he explains, “and it was sort of a eureka moment. ‘Wait a minute—this is a project I need to do.’ I had been such a big fan of the book for so many years, and the book prizes a child’s imagination and the emphasis on adults not forgetting what it’s like to be a child. And so I thought, ‘Well, wait a minute—here I am, 46 years old and into LEGOs.’ And it’s the perfect story to be made out of LEGOs.”

Before he could start building his prototype, however, he had to decide what to include. “My thought was, in the books you spend so much time on the asteroid, so I had to have the asteroid in the prototype. Originally, I came up with more of a two dimensional asteroid. And then talking to a friend of mine, he was telling me about how to make a three-dimensional, six-sided box that looks like a ball made of LEGOs. It’s a technique they call S.N.O.T, which sounds gross but it stands for ‘Studs Not on Top.’”

Walle also spent a lot of time building the airplane that crash lands in the desert, where the book’s narrator meets its title character. Other parts include a baobab tree, the main characters and the Little Prince’s rose under her glass dome.

Of course, even if Walle gets his 10,000 votes, there’s no guarantee that an actual Little Prince LEGO set willever hit the market. Winning prototypes for sets based on the TV comedy “The Big Bang Theory” and the movie “Wall-E” are now in production, he says, but others winning projects didn’t make the cut. Three projects based on the video game “The Legend of Zelda” hit the 10,000 mark, but no set has emerged, possibly because of licensing difficulties.

If the LEGO Corporation were to decide that the idea was marketable, they would engineer their own set, which might or might not resemble Walle’s admittedly rough prototype. “Frankly, they would build something better than what I did,” he says with a laugh. “Let’s be blunt about it. I’m just doing my best efforts, but they’re the professional designers.”

If it came to that, the Saint-Exupéry Estate would also have to sign off on the deal. That isn’t a sure thing either, but Walle has spoken with them and was thrilled to find that they were “nuts about the project. I can’t say that they will approve the license, but they definitely want this set made.”

Maybe that’s because the very idea of a man on a quest to create a toy based on a book that idealizes the wisdom and innocence of childhood is the kind of thing Saint-Exupéry himself would have appreciated. “Even when I was in college, I knew I wanted to have a family someday,” Walle says, “and now that I’m thinking about it maybe that’s part of what draws me to the book—in the sense that the story is also about protecting and valuing innocence: the way that the aviator tries to look out for the Little Prince, and the way that the prince cares for his rose.”

If you’d like to support Walle’s dream before the Sept. 27 deadline, you can cast your vote at ideas.lego.com/projects/50323