The First Amendment in Action

Two young Sagehen journalists talk about their work in covering the protests that swept the country following the murder of George Floyd and their role in our democracy.
June 24, 2020  by Staff 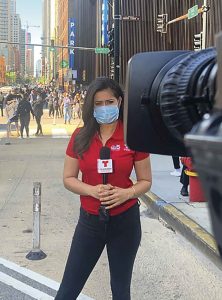 A Democracy Reader: Part 4: Freedom of the Press

As multiple crises converged on the nation in May, reporters Marybel Gonzalez ’09 of Telemundo Chicago and Sam Kelly ’18 of the Chicago Sun-Times were sent into the Chicago streets to cover the protests and confrontations with police that followed the death of George Floyd in police custody in Minneapolis. Amid a global pandemic, a national reckoning with racism and police brutality and deep political divisions, Gonzalez and Kelly reflected on working in journalism in a time of crisis amid cries of “fake news” from the President of the United States.

PCM: What was your role in covering the recent protests in Chicago?

Gonzalez: I’ve been covering the protests since they first started here in Chicago. The first large-scale George Floyd protests were held May 30 in downtown Chicago. Since then, our entire news team has been diligently covering all angles of the current events. In conjunction with our NBC 5 sister station, we’ve covered every major neighborhood in Chicago and its suburbs. Telemundo has specifically focused on the largely Hispanic communities, including Pilsen, Little Village, Belmont Cragin, Brighton Park and West Chicago, to name a few.

Kelly: I’m a breaking news reporter, so I work on the 24-hour breaking desk. I work the night shift. The protests were the news, and so that’s what I was covering. I got sent out into downtown Chicago on Saturday night and I put my bike on the bike rack of my car. I parked outside of downtown and then I biked in. I think the worst of the confrontations between police and protesters was in the afternoon that day. But it was still certainly pretty hectic late that evening as well. The cops were frantically just driving all over the place, in some cases. In other cases, there were large congregations of police just trying to hold lines to make sure people weren’t passing beyond a certain point in town. Things escalated on and off throughout the evening as far as confrontations between police and protestors.

PCM: Tell us what you’ve witnessed.

Gonzalez: From peaceful demonstrations and civil resistance to looting and acts of violence between police officers and residents, I’ve witnessed firsthand how the George Floyd protests and riots have unfolded across our city and surrounding areas. I’ve reported on a crowd of thousands who took to the streets of downtown Chicago chanting while they marched, while others knelt and took a moment of silence to call for an end to racial violence. On the other hand, we’ve also witnessed looting of commercial retail stores and small mom-and-pop shops. We’ve interviewed business owners on the aftermath of these acts, some of them denouncing the vandalism, while others saying they understand the anger behind them. In areas like Brighton Park, Pilsen and Cicero we’ve done stories about how local gang members guarded their neighborhood stores against looting.

We’ve also reported on how some have used their own resources, platforms and creativity as a way of protest. In Little Village, for example, a group of people performed an Aztec dance to show the Latino community’s support for the Black Lives Matter movement. In the city of Aurora, business owners commissioned local artists to paint murals on their boarded-up storefronts to show solidarity for the protests. Outside of Chicago Police headquarters, Black female clergy leaders read prayers and poems out loud demanding police reform.

The manner and platforms in which activists, residents and protestors have expressed their solidarity varies. However, based on interviews we’ve conducted, the call to action of many of them is the same: people are demanding justice for George Floyd and for all others who have died while in police custody.

As a journalist, it’s been important to cover all angles of how these events, as they add context as to why these protests are taking place.

PCM: Sam, you saw one officer spit at a protestor and others tackle a protestor and hit him with a baton. How surprising was it to see that kind of reaction from police?

Kelly: Not very surprising, to be honest. I understand the history of police in this country and Chicago especially. I’ve lived here my whole life. I understand that tensions are really high among protestors and among police. I work with police every day in my job, as far as my usual reporting, so I wasn’t surprised to see them responding that way.

I have a lot of personal feelings about the police relationship with Black communities and communities of color and impoverished communities, but I have to put those aside as a journalist and just report what I see as accurately as possible and try to let justification or lack of justification for any actions make themselves clear without inserting myself into the situation. But that can be hard sometimes because I’m also just a person, and I have my own feelings about the situation.

In that instance, I wasn’t filming when the cop spat at the protestor’s feet because up until that point, it had just been a guy walking by with his fist raised, shouting slogans, shouting “Black Lives Matter,” “No justice, no peace.” He purposefully walked very near the officers but never threatened violence or anything. I wasn’t filming every single thing I saw because there was so much happening, but once I saw the cop spit at the guy’s feet, I pulled my phone out. But you know there were a lot of moments like that, but I wasn’t really processing them emotionally as much as just trying to do my job.

PCM: Have you covered protests in the past? If so, how are these protests different?

Gonzalez: While working as an investigative reporter along the U.S.-Mexico border in the Rio Grande Valley, I covered protests calling attention to family separations due to enforcement of the Zero Tolerance Policy, rallies against and in favor of border wall construction along that region, and protests related to the detention of migrant children in the area. However, the George Floyd protests are vastly different from ones I’ve covered in the past. For one, the scale of these protests is notable. People across the globe have taken to the streets to protest in the name of George Floyd. Social media platforms have also played a large role in this. People have used those streams to coordinate virtual protests. These avenues have allowed people to upload images and videos of the protests as they are happening. While this has led to a plethora of valuable information being shared, it’s also caused a lot of misinformation to spread as well.

It’s also worth noting that these protests are happening in the middle of the COVID-19 pandemic. Because of that, we’ve had to be mindful of how we can cover these protests up close, while also ensuring the safety of our news team and our interviewees. Now more than ever, newsrooms require we have all hands on deck to cover the fast-changing events. However, due to the pandemic, many newsrooms across the nation have had to cut staff and therefore also resources that are needed in times like these.

PCM: There have been instances of reporters being injured or arrested. Have you felt unsafe?

Kelly: The only times I ever felt unsafe were when I got caught in the middle of skirmishes or potential skirmishes. There were a lot of times when protestors would start to congregate near cops and maybe a few rocks would be thrown. Obviously the police’s plan for diffusing the situation—and it worked pretty well for them—was just to run in a line at the protestors. Every time that happened, the protestors would turn around and sprint back down the street. I was on my bike, like I said, so a few times I felt nervous about getting caught up in that. I also knew in those moments the police wouldn’t distinguish me from anyone else, so I had to run with them.

Gonzalez: Across the country, we’ve learning of incidents of violence against media. We’ve heard reports and seen videos of photographers and reporters allegedly being assaulted by law enforcement and residents. We’ve even heard of reports of journalists arrested while covering a protest.

Our company has been very good at providing security for us if we are covering any large-scale protest or rally. We’ve also been instructed to drop our assignment if we feel our safety is in jeopardy.

However, it is concerning that members of the media are facing violent acts and arrests.  Now more than ever, we need journalists on the ground covering what is happening in real time. We are committed to informing our viewers of these historic moments. Incidents like these only interfere with our duty to ensure public transparency and our responsibility to tell the stories of those involved in these current events.

Can you speak to the commitment of being a journalist covering this issue at a time when the media is facing such challenges?

Kelly: It bothers me to see the way Trump talks about the press and the attitudes that people have developed about the press. Because I think when journalism is done correctly, it’s a valuable resource to our community, to our society.

That being said, I understand the frustration that a lot of communities have with the press, communities that may have been misrepresented historically. I don’t necessarily hold it against anyone who has those convictions in good faith. I have seen a lot of things on social media about journalists who are coming under attack at protests. And it is infuriating, absolutely, and it makes me upset. But I also think a lot of the journalism community is making this about themselves, and that bothers me as well, because the communities that are protesting have been dealing with that violence forever, for generations. So if anything the recent events have encouraged me to try be mindful of my role in the situation as best as I can. The last thing I want to do is make things worse. Within my power, my main goal has been to put an accurate description out there that includes the voices and perspectives that maybe haven’t been heard from as much in the situation that’s going on.

Gonzalez: I believe journalism is critical in shaping our democracy. Journalism ensures transparency at all levels. Through fact-checking, it holds those in power accountable; through storytelling, it gives a voice to those at the center of a given event. Journalism ensures the public is well-informed so that they can make their own decisions about the issues that make a difference in their communities. I would say that democracy cannot exist without freedom of the press.