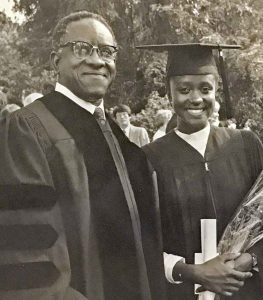 Esther Brimmer with her father, Andrew Brimmer, at the 1983 commencement exercises.

Last May, when foreign policy expert and former member of the Obama administration Esther Brimmer ’83 stepped up to the podium in Marston Quad as the featured speaker for the 2019 commencement exercises, she was following in some big footsteps—her father’s. Andrew Brimmer, then governor of the Federal Reserve, was Pomona’s featured commencement speaker in 1983, the year his daughter graduated from Pomona. In her address, Esther Brimmer recalled her father’s advice to her: “Run with the swift. … Whatever you do, you should try to learn from the best.” 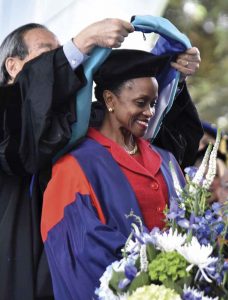