Home » Uncategorized » Nat Dunn ’93 offers up new word game that will test your brain, not your luck

Nat Dunn ’93 offers up new word game that will test your brain, not your luck 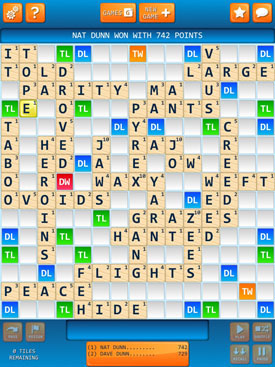 Editor’s note: To play the game with fellow Sagehens, follow these instructions provided by Nat Dunn.

With Nat Dunn’s new game, true word buffs will no longer have to rely on luck.  His twist on Scrabble, Words with Friends and the other word games eliminates some of the chance by having everyone play the same letters in every round.

Instead of hoping for better letters than your opponent, you’ll have to rely on all that knowledge bouncing around in your liberal-arts-trained brain. Thus the name: Word Skill.

Dunn, Pomona College Class of ’93, also seeks to speed up play with time limits, and to keep players from getting stuck with loser letters, there are fresh ones for each turn. And there’s a “winner” for each round since fair comparisons can be made with everyone playing the same letters.

“What we’re trying to do is make every move an exciting move,” says Dunn, who grew up playing games such as Scrabble and came up with the Word Skill app with his brother, Dave. (Someone else did the technical development.) Until starting their new venture, Acuity Apps, most of the Dunn’s work has been in educational games through their firm, Webucator, based in New York State.

Word Skill is already in the iTunes app store, and is coming this week to Facebook and Android. While Dunn says beta-testers have liked the game, he concedes the real test is just beginning. We think it’s a great game,” he says. “But we won’t know that the world thinks it’s a great game until the world starts playing.”