Historian Alison Rose Jefferson ’80 appears in the documentary White Wash , just released on DVD this month, which delves into the rarely-told story of Black surfers. 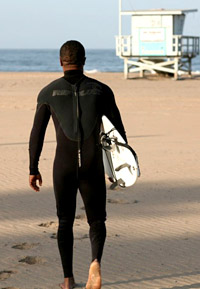 Jefferson spent years uncovering the history of a stretch of Santa Monica State Beach–labeled the “Ink Well” by some–where the Black community gathered during the decades of de facto segregation in Southern California from the 1920s to the 1950s. When the City of Santa Monica unveiled a plaque in 2008 marking the spot as a “place of celebration and pain,” officials turned to Jefferson for the inscription’s wording, and her research was featured in the fall 2009 (page 39) issue of PCM.

Filmmakers Ted Woods and Airrion Copeland knew of Jefferson’s work and, in the documentary, she discusses the history of the Santa Monica site, the “historic Los Angeles County African-American community’s relationship to the beach” and Nick Gabaldon, the first identified surfer of African American and Mexican descent.

“Film viewers will be surprised to learn that people of color were surfing in Hawaii and Africa long before the California surf culture and Gidget movies brought the sport to American popular culture attention in the 1950s,” says Jefferson. “They will be surprised about the history of the complexities of race in America and water culture as seen through the eyes of the ocean and Black Americans.”

Also featured in the film are many historians and authors along with such surfers as Kelly Slater, Rusty White and Rob Machado. Grammy winner Ben Harper, who has Claremont ties, is narrator.