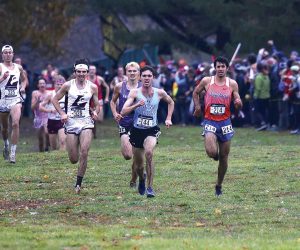 “This really is surreal. Words can’t really describe the feelings from today,” Coach Jordan Carpenter said after the Sagehens ended the three-year reign of North Central College, a perennial power from Illinois that had won seven of the last 10 titles. “So much elation and excitement for what these guys accomplished today.”

The title is the first NCAA team championship for Pomona-Pitzer since the champion women’s tennis team of 1992.

“We came in with the goal of finishing on the podium, but we hadn’t really talked about the ability to win,” Carpenter said. “We have such a young group and only had three runners with national meet experience, so I honestly thought that next year would be our chance to win. The guys proved me wrong, and we had an amazing day today.”

On the women’s side of the event, Pomona-Pitzer finished in 12th place.

Two Pomona-Pitzer men and two Sagehen women took All-American honors. Ethan Widlansky ’22 came off his NCAA West Region Championship to take a seventh-place national finish in a time of 24:32.9. Not far behind him was Dante Paszkeicz ’22, who also earned All-American honors with a 16th-place finish in 24:48.5. Lila Cardillo ’22 led the way for the women with a 12th-place finish at 21:38.3 and Helen Guo ’20 took 14th at 21:41.0.

“The improvement this group has made from last year is remarkable,” Carpenter said. 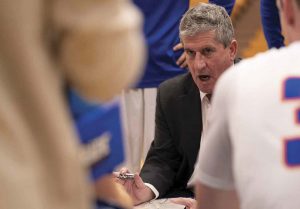 It’s little surprise that the week before his milestone victory against Cal Lutheran, Katsiaficas didn’t know when it might come or have any opinion on where it would rank among the most important wins in his 33 seasons as Pomona-Pitzer’s coach.

That’s because the biggest win in his mind is usually the last one. Or the next one. (When this issue went to press Sagehens had won 16 of their last 18 on their way to a 16-4 start.)

“I think it’s hard for any coach to get outside of the current moment—moving on from the last game, preparing for your next game,” Katsiaficas says. “I can say, however, those questions and conversations definitely shine a spotlight on all the remarkable young men that have left their mark on our program through the years.”

The Sagehens have had winning records in 26 of his 32 seasons, with the 27th of 33 well on its way. They have won 11 Southern California Intercollegiate Athletic Conference championships and played in the NCAA Division III Tournament 11 times.

Those 500 wins rank Katsiaficas 15th among all active Division III men’s basketball coaches, and he has won more games than any coach in any sport in Pomona-Pitzer history.

Last season’s team was among his best, cracking the top 10 of the national rankings for the first time and setting a program record with 26 wins while advancing to the second round of the NCAA Division III Tournament.

Back in 1986, Katsiaficas was a Pomona-Pitzer assistant coach who got a chance to be interim head coach when the Sagehens’ coach, Gregg Popovich—now the five-time NBA champion coach of the San Antonio Spurs—took a one-year leave of absence.

When Popovich returned, Katsiaficas spent one season as an assistant at the University of San Diego before returning to take over the Pomona-Pitzer program in 1988, when Popovich left to become an assistant with the Spurs. 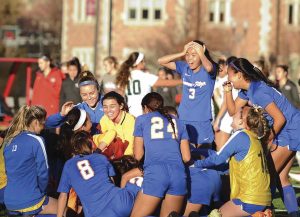 It could be a single goal by first-team All-American Bria VarnBuhler ’20, who set a Pomona-Pitzer record with 21 this season—including nine game-winners, tied for third-most among all Division III players.

It could be a game-saving stop by third-team All-American Isa Berardo PZ ’20, the starting goalkeeper for a strong defense that has shut out 20 of 23 opponents on the way to a 20–1–2 record. After leading Division III in goals-against average and save percentage last season, Berardo is in the top three in both national categories again.

Or it could be as slim a margin as a single penalty kick settling into the back of the net—or tipped away by a finger.

Close games have become a specialty. They advanced to the Final Four with three final scores of 1-0, including a win in penalty kicks after a scoreless tie against No. 3-ranked Washington University, with Berardo making the save that set off a celebration.

It was a reversal of what happened three years ago, when these seniors were playing in their first NCAA postseason and a loss to the University of Chicago in penalty kicks sent them home, one step shy of the Final Four. “I mean, gosh, it was heartbreaking after losing that,” remembers VarnBuhler. “Coming back and having our season potentially end the same way as it did freshman year—that was just not really an option. We had just worked too hard for that to happen.”

It didn’t. The Sagehens got payback against Chicago this time with a 1-0 overtime victory in the regional semifinal on a golden goal by Anna Ponzio PZ ’22. Then they edged Washington in the final, thanks in large measure to what Coach Jen Scanlon calls “this pretty amazing group of seniors.”

A national championship, however, will have to wait for another year, as the team’s incredible season come to a close in the Final Four with a 2-0 semifinal loss against William Smith College.

Player of the Year