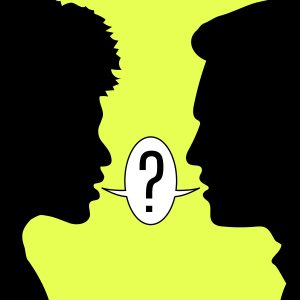 SIMPLE TRAFFIC STOPS escalate, ending in unnecessary deaths. In courtrooms, justice is not always served. And in prisons, the voices of many of the incarcerated sound alike.

As a sociolinguist, Assistant Professor of Linguistics Nicole Holliday specializes in the study of how language and identity interact. More specifically, she focuses on the many implications of a central question: What does it mean to sound Black?

Holliday’s research on race and intonational variation examines wide aspects of society, including political speech. Yet there are few areas where the impact of race and linguistic differences is more stark than in the criminal justice system.

In just one example, in 2015 a college-educated African American woman named Sandra Bland was arrested in Texas after a minor traffic stop turned into a confrontation. Three days later, Bland died in jail in a suspicious death that was ruled a suicide.

After hearing the dash-cam audio of the incident, Holliday and fellow linguists Rachel Burdin and Joseph Tyler analyzed it and wrote an article, “Sandra Bland: Talking While Black,” that was published by Language Log, a linguistics blog hosted by the University of Pennsylvania.

With the help of linguistics tools such as the software program Praat and spectrograms that provide visual representations of variation in pitch, the researchers argued that the state trooper and Bland were, in essence, speaking different languages.

“What we came to was she is using an identifiably African American tone pattern and he is not really matching her. So she starts in one place. He starts in another place. And it’s clear that as the situation escalates, he’s increasingly interpreting her as disrespectful, hostile, something like that. She does a few things in particular where she uses these kinds of tones, where her voice falls and rises on the same syllable. This is a pattern that we see more frequently with African American speakers.

“With the officer, he doesn’t really do that at first, but as he moves through the interaction with her, he starts to be more like that. So we think there is a mismatch in his expectations of what she was supposed to sound like as a respectful citizen. But this mismatch is fundamentally about the fact that she speaks African American English and he doesn’t.”

Bland died in jail after an incident that appeared to start with no more than a failure to signal. Her family ultimately sued, settling a wrongful death suit for $1.9 million. A misdemeanor perjury charge against the state trooper, Brian Encinia, was dismissed after he surrendered his law enforcement license and agreed not to work in the field again.

Another prominent case examined by linguists is the outcome of the trial in the shooting death of unarmed Black teenager Trayvon Martin in Florida in 2012. George Zimmerman, a neighborhood watch volunteer, was acquitted of second-degree murder and manslaughter in Martin’s death.

In a paper titled “Language and Linguistics on Trial,” Stanford University Professor John Rickford, now retired, and co-author Sharese King, now an assistant professor at the University of Chicago, argued that the testimony of key prosecution witness Rachel Jeantel, a 19-year-old Black teenager, was dismissed as not credible because she spoke in African American English, contributing to the not-guilty verdicts. Jeantel was on the phone with Martin as the incident unfolded.

“They lay out all of these moments where she’s using these features of African American English that could clearly be misinterpreted by people unfamiliar with the variety,” Holliday says. “So basically, she’s speaking really differently than the lawyers, than the jury, than the public.

“There are a number of features of African American English that Jeantel employs that may be unfamiliar to mainstream listeners. For example, Rickford and King point out the use of ‘zero copula’, or the omission of the overt ‘is’ or ‘are’ verb in a sentence. Jeantel also uses differences in use of plural and possessive forms, which are also forms that may distinguish African American English from mainstream varieties.”

Jeantel’s testimony included phrases incorporating those styles, and some listeners may be unable or unwilling to hear beyond a highly socially stigmatized way of speaking.

“So when you hear somebody speak this way and you have these biases, you might just say, ‘Oh, this person is not educated and I’m going to stop listening,’” Holliday says.

“People attach a lot of judgments about morality and character to the way that people talk. And these biases that we have are almost always racist, classist, sexist, problematic in some other way, but it’s not the fault of the language. The language just varies. And that’s a natural part of what language does. But the variation gets interpreted as a problem.

“It’s very transparent that people’s ideas about language aren’t really about language,” she says. “They’re about other sociological phenomena.”