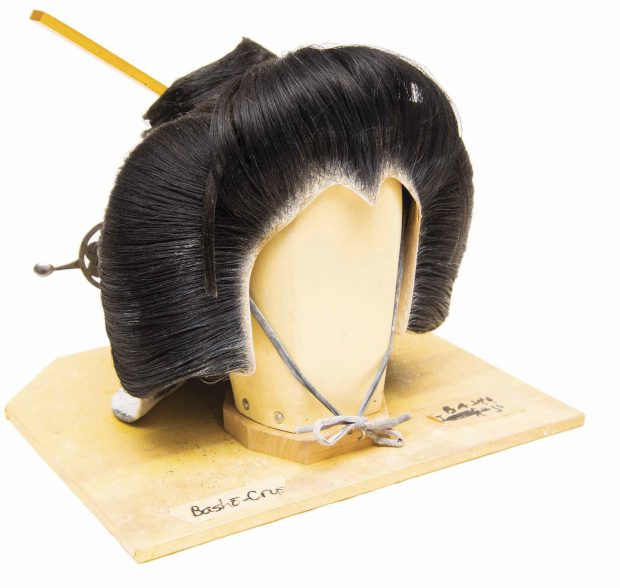 In the early 1960s, the late Professor Leonard Pronko discovered the Japanese art of kabuki while studying theatre in Asia on a Guggenheim Fellowship. He then made history in 1970 as the first non-Japanese person ever accepted to study kabuki at the National Theatre of Japan. Bringing his fascination back to Pomona College, he directed more than 40 kabuki-related productions over the years, ranging from classic plays to original creations. The wig pictured here is one of several that remain from those productions. Below are a few facts about that intriguing Pomona artifact. (For more about Professor Pronko’s life, see In Memoriam.)

Fact 1: One of about 20 wigs kept by Pomona’s Department of Theatre and Dance in its restricted costume storage area, this geisha-style wig is part of a collection of props and costumes obtained by Pronko from Japan for his classic kabuki and kabuki-inspired theatre productions.

Fact 2: Like all wigs for female characters, it was intended to be worn by an onnagata, a male kabuki actor who performed in women’s roles.

Fact 5: Most such wigs are made of either human or horse hair and styled with lacquer.

Fact 7: Pronko wrote extensively about the art of kabuki, which he said attracted him because it was so “wildly theatrical.”

Fact 9: He directed a number of classic kabuki plays, including Narukami Thundergod, Ibaraki and Gohiki Kanjincho.

Fact 10: He also staged kabuki versions of such Western classics as Macbeth.

Fact 11: One of his most original productions was a “kabuki western” titled Revenge at Spider Mountain, based on his love of Native American folklore and inspired by two classic plays: Yoshitsune and the Thousand Cherry Trees and The Monster Spider.