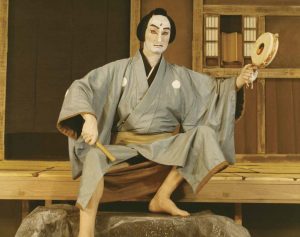 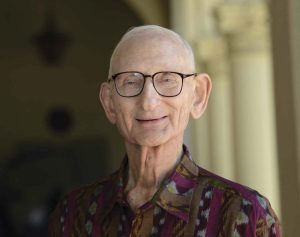 During his remarkable 57-year career as a beloved member of the Pomona faculty, Professor Emeritus of Theatre and Dance Leonard Pronko was known for his infectious love of theatre—and, particularly, for his dedication to kabuki, the traditional Japanese art form combining stylized drama and dance, on which he became one of America’s leading experts.

An embodiment of the liberal arts, Pronko possessed great depth and breadth of knowledge in several fields. He originally came to Pomona as a professor of French and continued in that capacity for almost 30 years. Coupled with his love of French literature, however, was his passion for the performing arts. He started directing theatre productions at Pomona almost as soon as he arrived in Claremont, bringing to the stage works by such playwrights as Shakespeare, Molière and Ibsen. Following his interest in acting and performance and his research interest in French avant-garde theatre and kabuki theatre, over the next half-century he would transition fully into the world of theatre. In 1985, he was officially invited to join Pomona’s Theatre Department, which he did, eventually becoming its chair.

Pronko was probably best known for offering at Pomona one of the nation’s first opportunities for students to learn the authentic basics of kabuki performance and to join in kabuki-style productions. First introduced to the art form during a sabbatical in the early 1960s, he made history in 1970 as the first non-Japanese person ever accepted to study kabuki at the National Theatre of Japan, and in the years after, as he practiced and taught the art at Pomona, he became known as its unofficial ambassador in the United States. With his broad knowledge of international theatre, he helped to turn Pomona into a hub of dramatic experimentation, infusing classic works such as Macbeth with kabuki elements and leading students in his own original productions, such as Revenge at Spider Mountain, which he termed “a kabuki western.” In 1985, the Japanese government awarded him the Order of the Sacred Treasure, Third Class, for his efforts to promote knowledge and appreciation of kabuki in the U.S.

Pronko was the author of several books, including Theatre East and West: Perspectives Toward a Total Theatre, Guide to Japanese Drama, Avant Garde: The Experimental Theatre in France and The World of Jean Anouilh. Among his diverse honors were two Wig Distinguished Professor Awards, a prestigious Guggenheim Fellowship, a 1972 Los Angeles Drama Critic’s Circle Award for his kabuki productions and the Association for Theatre in Education’s Outstanding Teacher of Theatre in Higher Education Award in 1997.

Born in the Philippines, Pronko earned his B.A. from Drury College, his master’s degree from Washington University in St. Louis and his Ph.D. in French literature from Tulane University. He also studied at the École Charles Dullin in Paris. He taught at the University of Kansas and Lake Erie College, in Painesville, Ohio, before joining the Pomona faculty in 1957.

Though he retired in 2014, Pronko had remained actively engaged with the College community and the Theatre Department right up until his recent illness. 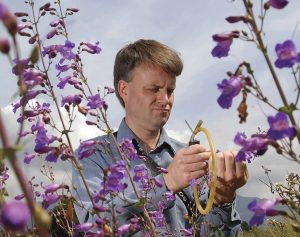 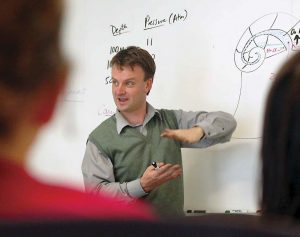 The William A. Hilton Zoology Professor and Professor of Biology
1962–2019

Professor Jonathan Wright will be remembered for his enormous enthusiasm for both science and music—at both of which he was equally gifted and dedicated—as well as his unsurpassed ability to communicate not only his encyclopedic knowledge in his chosen field of comparative physiology, but also his untiring sense of wonder at the big and little mysteries he had devoted his life to studying.

As one of his recent students noted, his knowledge and enthusiasm inspired his students “to see and explore how science can make the seemingly mundane seem incredible.”

A native of Great Britain, Wright earned his B.A., M.A. and D.Phil. degrees from Oxford University before coming first to Canada, then to the United States, where he spent five years on the faculty of Northern State University in Aberdeen, S.D., before coming to Pomona in 1998.

At Pomona, he rose to hold the title of the William Atwood Hilton Professor of Zoology. Wright was a two-time winner of the Wig Distinguished Professor Award for Excellence in Teaching in 2001 and 2009.

One student who nominated Wright in 2009 wrote: “Jonathan Wright cares so much about his students. A true mentor, role-model and friend to his pupils, as well as an excellent professor and an incredibly knowledgeable biologist and natural historian.”

Another student wrote in 2001 that Wright “… is one of the nicest guys I’ve met on campus. He is extremely passionate about what he teaches, and that passion rubs off on his students (I can now see the ‘beauty’ in a cockroach). … He is extremely knowledgeable in just about anything. Students have a running joke in trying to stump him with a question he can’t answer.”

Yet another student noted: “Dr. Wright is not only a fantastic teacher; he genuinely cares about all students’ success and strives to help in any way he can. … Walking through Bernard Field Station with him is so much fun because everywhere you go, he has something interesting to say about the surrounding flora and fauna. I enjoyed having him as a professor to the point where I have built my schedule for next semester around taking the other class that he teaches.”

An active scholar, Wright was also a deeply engaged member of the College community, serving in the past as associate dean of the college and as chair of the Biology Department. Recipient of numerous grants for his research from such organizations as the National Science Foundation, Wright also served on numerous committees, including the Faculty Advisory Committee for the Bernard Field Station.

His life as a musician was just as important to him as his love of science. Having studied classical violin from an early age, he performed regularly in orchestral, chamber and solo repertories. In Claremont, he played with the Pomona College Symphony, the faculty string quartet Euphoria, a violin-piano duo and other ad-hoc ensembles.