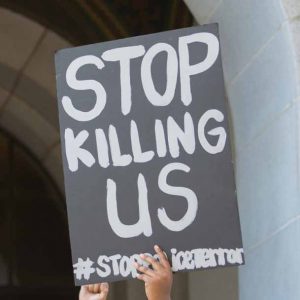 This isn’t over, not by a long shot. America’s cities are still in turmoil, as are hearts and minds across the world, after we watched the horrifying death by suffocation of George Floyd, an African American man whose life was snuffed out under the knee of a police officer over 526 seconds. He pleaded for his life, asked for his mother. Onlookers begged the officers holding Floyd’s neck and body to the ground to stop—to have mercy.

It’s not over. It’s not even just begun. This is yet one more in a long line of deaths: pointless, painful, final. One man died by jogging. A woman by opening her door. A boy by playing in a park. And the crisis that has in America brought forth bloody flowers and strange fruit (the blistering language used to describe lynchings sprung from trees across my country) has spread.

Protests rock the world: in London, Mexico City, Amsterdam, Nairobi, Haifa, Lagos, Buenos Aires, Tokyo and beyond. Meanwhile, nations that are nearly paralyzed by the COVID-19 pandemic, and particularly the minority communities within them who are hard-hit by medical and financial inequalities, are facing choices. What do we do? How do we express outrage? Most importantly, how do we make change?

Many people ask me these questions, and as an academic, and now president at a small liberal arts college in California, I seek answers. I’m the mother of two children, both Black like me. The terror I feel for them sometimes leaves me gasping for breath. Yet I know there is a road I must walk if any of this is to change for them, and for children across the U.S. and around the world.

The hatred delivered to Black people wasn’t born on America’s streets. It runs so deep in our history and can rear its head anywhere. This is revealed in the protests around the world. The name for this systemic hatred is simple: ugly. It is the ideology of white supremacy, an ideology born of the need to control populations across the world as Europe expanded its empires. It was born, equally, of the need for those who perpetuated it to feel morally just.

I recall coming across a 400-year-old poem attributed to John Cleveland while carrying out dissertation research in the British Library two decades ago: a dialogue between “a fair Nymph” and “a black boy.” The boy pursues the nymph; the irremediable darkness of his skin threatens the proclaimed purity of hers. A solution is suggested through the metaphor of a printer’s press. The nymph says, “Thy ink, my paper, make me guess/ Our nuptial bed will make a press.” The boy’s ink will ultimately be written on her body, leaving a message for others to find.

The author must have thought himself a wit, while keeping a safe distance from the blood, brutality, murder, abuse, rape and fundamental degradation of the realities of slavery. But I can’t—won’t—keep my distance from the reality of racial hate and the necessity of making change happen today.

Each morning I must stand up and acknowledge my Black heritage for what I know it to be—a sign of strength, and a commitment to life even in the face of dark days. Then, I must straighten my back and return to a life of finely honed, severely tested optimism, in which education is held to be our last, best hope.

Thus, I work to make it possible for students to learn, research to advance, professors to teach. I work to enable the transmission, and even expansion, of the shared inheritance of humanity, the long, hard-fought knowledge we on this planet have gained, husbanded and promised to preserve. This has never been more crucial: By one estimate earlier this spring, more than 1.5 billion children had lost access to all education. Such students could fall as much as two years behind their peers.

Perhaps there is a slight opening in this moment, where the slowdown and solitude of the pandemic meets the crowds and cameras on the streets. A chance to be truly heard? We know we need far more than a fleeting “teaching moment.”

I tell my children, college students, anyone who will hear: Whatever you do to address the inequality, the brutality, the hatred and pain of racism, you must realize you cannot fight without knowledge. So spend the coming months and years as you prepare for adulthood doing just that. Study policies that help reduce the use of force, mitigate poverty, cure those who need healing. Learn the tools of justice and the history of their uses and failures. Indeed, the 14th Amendment of the U.S. Constitution was passed, in part, to stop deadly harassment by “lawful” authorities of African Americans in the antebellum period.

Help your generation and mine, and those between us and beyond, to see past the misdirection, to rebut the lies and half-truths and to find a path together. It isn’t over.

This essay was originally published in The Financial Times under the title “What to tell young people about systemic hatred in our society.” It is reprinted with permission.