The pandemic turned the Sagehens’ first invitation to the Sweet 16 into a bittersweet memory.
June 24, 2020  by Robyn Norwood 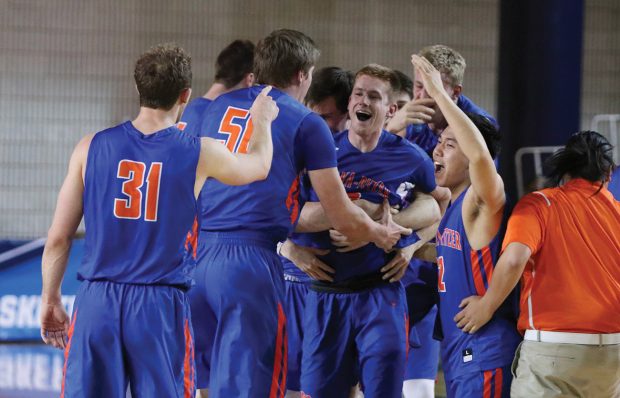 The team mobs Jack Boyle ’20 after he hit the game-winning shot to send the Sagehens to the Sweet 16.

Pomona vs. the Pandemic Part 3

Part 1: Pomona vs. the Pandemic

Part 4: Job-Hunting in the Pandemic

Part 5: Sagehens on the Front Lines

FIRST CAME THE SHOT: Jack Boyle’s spectacular three-pointer from the corner as time expired on March 7 sent Pomona-Pitzer to the Sweet 16 of the NCAA Division III men’s basketball tournament for the first time in program history.

“It felt like it hung in the air for almost an eternity,” says Boyle PI ’20, before the ball splashed through the net for a 71-70 victory over 10th-ranked Emory and the Sagehens ended up in a celebratory pile near midcourt.

Next came the shock: Sitting on a plane five days later on March 12 as they pulled away from the gate at Ontario International Airport to fly to their next game near Chicago, players’ and coaches’ phones started to ding.

“We were 100 yards from the terminal and we all looked up at once and saw that the NCAA tournament had been canceled at all levels,” says Charlie Katsiaficas, men’s basketball coach and professor of physical education. “A flight attendant was standing right beside me, going through the normal routine that they do when you’re pulling back in terms of the air mask and the seat belt and all that. So I said, ‘Excuse me, ma’am, the game we’re flying to has just been canceled. Is there any way you can take us back to the terminal so we can get off the plane?’

“She goes running up the aisle and I’m thinking to myself, there is no way they’re going to allow us to get off this plane. She comes back 30, 45 seconds later and says, ‘Yep, we’re going to pull back in and let you guys get off.’”

So unfurled one of the most emotional turnarounds in the history of Pomona-Pitzer Athletics. The only way a season usually ends on a buzzer-beating victory is when a team wins a championship, unless a team’s not good enough to make the postseason at all. Instead, it ended by getting off a plane.

The shot was one shining moment, now forever in suspended animation.

“You realize that your sports career is over, for many of us,” James Kelbert ’20 says from his home in San Jose as classes moved online and events across the country were suspended or canceled because of the global coronavirus pandemic. “You have people crying; you have people just very upset. It’s a weird feeling, because you’re done, but you hadn’t lost. You go through a whirlwind of feelings and emotions, just trying to navigate all of those.

“But at the end of the day, you’ve got to keep it in perspective, at least from my point of view. This is a serious pandemic going on. This is probably the best thing for all of us.”

The play will live on in Sagehen lore.

Down two points with 2.2 seconds to go in the second round of the NCAA tournament, Pomona-Pitzer had the ball out of bounds near the Sagehens’ bench.

The strong-armed Kelbert, also the goalie for the Pomona-Pitzer water polo team, stood on the sideline to inbound the ball. Alex Preston ’21 set a screen in the lane to free Boyle. And Kelbert led Boyle with a pass like a quarterback leading a receiver, hitting him with a two-handed, diagonal cross-court pass as he arrived in the far corner.

“Preston set a great screen, so I was I was able to get pretty wide open,” Boyle says. “Kelbert made an absolutely phenomenal pass.”

A defender rushed in to try to block the shot, but Boyle threw a fake.

“I saw the guy fly by me, and then I had a clean look at the basket. I felt confident in the moment that I could get a good shot off, and so I just let it fly,” Boyle says.

And so it ended.

After their third-round game against Elmhurst College in Illinois was canceled, the team deplaned and returned to campus, where students were packing to leave for the semester. For seniors Boyle, Kelbert, Micah Elan PI ’20, Adam Rees ’20 and Matthew Paik ’20, it was the end of the line.

“That’s the tough thing, just trying to squeeze in that emotional journey,” Kelbert says. “I think there was a four-day turnaround between being on that plane ready to take off and then me leaving campus for the last time as a senior. People were trying to sell as many things as they possibly can, especially seniors who were like, ‘What am I going to do with my fridge now?’”

Realizing there would be no exit meetings, no banquet, no closure, Katsiaficas and his staff called a meeting for the next day, and the team played some loose, somewhat socially distanced pickup ball, then had Domino’s pizza for dinner amid informal awards and recognition.

“We all just kind of got to enjoy each other’s company and play the game we love,” Boyle says.

The son of University of Colorado Coach Tad Boyle and older brother of high school senior Pete Boyle, who plans to attend Pomona and play for the Sagehens next season, Boyle is back home near Boulder, studying online and plotting his future. After interning last summer for the San Antonio Spurs, coached by former Pomona-Pitzer coach Gregg Popovich, he plans to pursue coaching for at least a while, maybe get an MBA.

“This just makes me want to become a doctor a whole lot more,” he says. “Just because you see the bravery and you see the selflessness that they go through, because a lot of people are treating tons of victims without any personal protective equipment, knowing very well they could get infected and die from this.

“It’s really tough to see them go through these plights but it’s definitely strengthened my own convictions.”

The Division III NCAA championship game would have been April 5 in Atlanta, sharing the weekend stage with the NCAA Division I Men’s Final Four. Who is to say where Pomona-Pitzer’s run might have ended?

“I think guys were like, we want more, we want to see where we can take this thing,” Katsiaficas says. “But we also know there are a bunch of other teams that are dealing with similar situations. Division II was in the middle of their national tournament and Division I was just heading into a lot of their conference tournaments. So you had teams all over the country that were chasing their dream of winning a national championship. Spring sports are having their whole season canceled.  So there are plenty of disappointments throughout the country.  But as we get further away from it, you realize this had to be done.  It’s something that makes sense for the country.”

The pain and frustration, over time, subside.

“It’s great to go out, I guess, on a high like that,” Boyle says. “To have your last college athletics experience be that moment.”