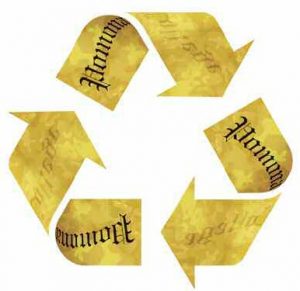 Just before her own senior year arrived, Abby Lewis ’19 was working to send off Pomona’s 2018 graduates in the most environmentally-responsible way possible—with a zero-waste commencement.

Armed with information and data from the Office of Sustainability, where she works during the year, Lewis noticed a significant spike in the College’s waste production during the month of May, when thousands come to campus for the annual Commencement ceremony. Working closely with Alexis Reyes, assistant director of sustainability, she started working on a zero-waste event model.

An event is deemed ‘zero-waste’ when organizers plan ahead to reduce solid waste, reuse some event elements in future years and set up compost and recycling stations in order to divert at least 90 percent of waste from landfills. For Pomona’s 2018 Commencement Weekend, Lewis focused, among other things, on the catered food and products served at the reception on Commencement Day.

Backed by a President’s Sustainability Fund grant, Lewis worked with Pomona’s catering management on details ranging from the type of wax paper used to wrap food, to proposing utensils that are compostable and the use of reusable sugar containers instead of sugar packets.

Instead of trash bins, Commencement attendees found recycling and composting stations where they could sort their waste. Nearly all food waste generated, such as plates, cups and napkins, was diverted to either compost or recycling. The disposable products used at Commencement were made from either corn starch or recycled paper.

Another key partnership that Lewis secured with the help of the Office of the President’s Christina Ciambriello and Reyes was a deal with Burrtec, the College’s disposal contractor. Lewis and her allies were able to convince the company to collect and process ‘industrially-compostable’ items such as specially labeled plates and napkins—something they usually don’t do as part of their service to the College.