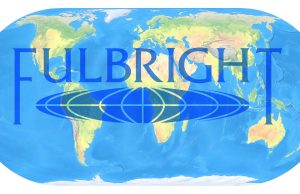 Twelve Pomona College recipients of the prestigious Fulbright fellowships are criss-crossing the globe this fall, doing research on independent projects or teaching English. Here’s a brief description of their plans:

Audrey DePaepe, a neuroscience major from Tualatin, Ore., takes her Fulbright to the Cognition & Brain Plasticity Unit of Barcelona in Spain and focuses her research on Huntington’s disease.

Jack Gomberg, a neuroscience major from Chicago, Ill., travels to Israel to explore the biopsychological effects of medical clowning on patient outcomes.

Laurel Hilliker, an Asian studies and history double major, from Pittsburgh, Penn., goes to Japan, intending to uncover the history of Zainichi Korean political activism within Osaka and Tokyo in the aftermath of the Pacific War.

Emily Rockhill, a biology major from Redmond, Wash., conducts research in southern Brazil, assisting on a project at Universidade Federal do Rio Grande do Sul to identify and describe new species of crayfish of the genus Parastacus.

Elizabeth Sun ’17, a French major from Albuquerque, N.M., is studying the teaching of English and French in Saarland, a region in western Germany that has historically been a space of French-German interactions.

Rory Taylor, an international relations major from Minneapolis, Minn., travels to New Zealand to examine how the United Nations Declaration on the Rights of Indigenous Peoples acts as a tool of legal advocacy for indigenous groups.

Victoria Vardanega, an economics and Asian studies double major from Fair Oaks, Calif., goes to South Korea to research the relationship between the press and government.

Don Chen, an international relations major from Normal, Ill., is teaching in Taiwan. He plans to focus on storytelling by hosting exhibitions of family history projects by students and an oral history event featuring local elders.

Lauren Callans, a neuroscience major from Ardmore, Penn., is teaching in Estonia. In addition to her love for teaching, she wants to explore her heritage as a third-generation Estonian and share her American culture.

Minah Choi, an environmental analysis major from Olympia, Wash., is teaching in Argentina. She hopes to contribute to the existing literature on Asian communities in Latin America.

Rhiannon Moore, a music major from South Pasadena, Calif., is teaching in Malaysia. Her interest in that country is rooted in her love for Southeast Asian music and desire to explore Malaysian music.

Inga Van Buren, a molecular biology major from Portland, Ore., is teaching in Taiwan. Drawing from her own multilingual background, she hopes to convey to her students the usefulness of being bilingual.