Home » Uncategorized » Who Needs a Horse?

Who Needs a Horse? 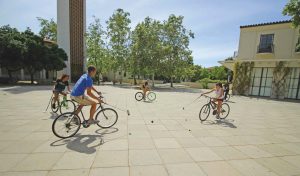 Some creative Pomona students made good use of the open spaces of Bixby Plaza in April for a game of bike polo, similar to the traditional game of polo, but with bicycles in place of horses.

According to Jeremy Snyder ’19 (who took the photo below), “the object is to hit the ball into a goal, which we usually just mark as a section of wall, using a mallet. You’re not allowed to set your feet down, or else you have to go over and tap the fountain. We usually play three-on-three every Friday afternoon at the plaza outside Frary, and we bring bikes up from the Green Bikes shop so that anyone who passes by and wants to join can. We made the mallets for it out of sawed-off ski poles from Craigslist and plastic pipe sections that we bolted onto the ends.”