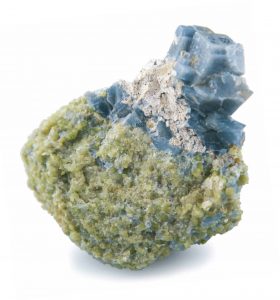 Deep in the bowels of the Geology Department in Edmunds Hall is a room full of storage cabinets with wide, shallow drawers filled with mineral specimens collected by Pomona geologists over the years. Many of them, according to Associate Professor of Geology Jade Star Lackey, go all the way back to the department’s founder, Alfred O. “Woody” Woodford 1913, who joined the chemistry faculty in 1915, launched the geology program in 1922 and served as its head for many years before retiring some 40 years later. Many of Woodford’s carefully labeled specimens came from the Crestmore cement quarries near Riverside, Calif. “Woody even had a mineral named after him for a while,” Lackey says, but the mineral was later found to have already been discovered and named. “More than 100 different minerals were discovered at Crestmore, including some striking blue-colored calcites—echoes of Pomona.” Ultimately, Lackey adds, Crestmore was quarried to make the cement to construct the roads and buildings of Los Angeles, but in the meantime, “Woodford trained many a student there, and the mineral legacy of Crestmore is widely known.”