It was World War II, a time when many Japanese Americans were denied their civil rights out of unfounded suspicions about their loyalty. Kazuma “Benny” Hisanaga ’41 faced another challenge: fighting against Hitler’s army on the European front.

Hisanaga was a member of the 100th Infantry Battalion, a segregated army unit made up of Japanese-American troops. Confronted with the double burden of prejudice against their ancestry along with the shocks and struggles of wartime, Hisanaga and his fellow troops proved they were more than capable of rising to the occasion. The 100th Battalion and its successor, the 442nd Infantry Regiment, would go on to become one of the most decorated units of the war. And Hisanaga, who had been a star athlete at Pomona, managed to carve out a remarkable legacy of leadership, winning some of the country’s highest military honors for his bravery in combat. 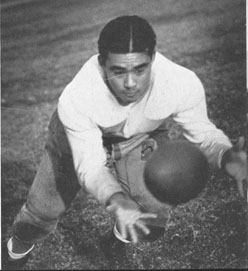 Born and raised in Hilo, Hawaii, Hisanaga showed his athletic prowess in high school. There, he caught the attention of his basketball coach Ung Afook ’24. A Pomona grad, Afook encouraged Hisanaga to apply to the College. Hisanaga took the lead and became the first member of his family to attend college on the mainland. He landed a spot on the football team, playing three years for the Sagehens as a guard and quarterback. Under legendary Pomona coach Earl “Fuzz” Merritt, he became a key member of the Sagehen squad, earning a varsity letter for every season he played and serving as team captain his senior year. He also took up baseball, playing three seasons as a shortstop.

Hisanaga made his way into the army first by volunteering for the Hawaiian National Guard after his graduation from Pomona. After the surprise attack on Pearl Harbor by Japan in December 1941, hysteria broke out in the islands, as people of Japanese descent came under suspicion as potential enemy agents.

“At the time, there were fears that the Japanese would invade the islands,” explains Pomona College History Professor Samuel Yamashita. “The authorities saw men of Japanese ancestry in the National Guard as a threat. People worried they might use their military training to help an invasion force.”

All national guardsmen of Japanese background were rounded up and shipped to Oakland, Calif. in the summer of 1942, where the 100th Battalion was born. The plan was to train the battalion of about 1,400 men ,and send them off to Europe to join the fight against the Germans.

Hisanaga and his comrades were well aware of the hostile attitudes they faced from other Americans. “We of Japanese descent are in a very ticklish position,” he wrote before in a letter to Allen F. Hawley ’19, an administrator at Pomona who had been a mentor to him during his undergrad years. “I’m aware of it and I’m trying my best to prove to all that we are just as loyal or even more loyal than others of different racial descents. I know one thing — I won’t let Uncle Sam or Pomona down.”

Over the course of the war, Hisanaga more than lived up to his pledge. During a string of battles in Italy and France, he earned a series of major awards for his leadership in the field, including the Bronze Star Medal, and a Purple Heart with Oak Leaf Cluster.

In one especially harrowing moment, Hisanaga and his men were ordered to seize an abandoned farmhouse outside the town of Bruy ères in northern France. According to army records, Hisanaga “dashed toward the building under intense enemy fire,” with his soldiers “immediately following behind.”

When one of the troops was wounded crossing a field, Hisanaga sprung into action. “With complete disregard for his own safety,” he ran back and carried the injured soldier to shelter. For his courage, Hisanaga was awarded the Silver Star.

After leaving the service, Hisanaga returned to his hometown and his passion for sports. A long-time coach at Hilo High School, he oversaw a string of championship football teams and ultimately became the school’s athletic director. Though he was approached over the years to run for political office or take up other leadership roles in the community, Hisanaga shunned the limelight, preferring to focus on his work with local teens.

“Working with kids was the most important thing to him,” says his son Bruce Hisanaga, who still lives in Hawaii. “His biggest priority was always the wellbeing of his students and their development.”

The elder Hisanaga, who passed away in 1998, was never one to call attention to his time in service. Bruce and his sister grew up without hearing much about the war years. Instead, they picked up bits and pieces from conversations they overheard between adults. “My father was always very private,” Bruce says. “He never made it a big point to share his exploits with others.”

Even so, the stories still find a way to reach others. Bruce recalls an encounter he had a few years ago at a golf tournament in Hawaii. There, he ran into another man who had grown up in Hilo. “This guy introduces himself to me, and says his older brother had served with my dad in the war.”

During a battle in Italy, the man’s brother had stepped on a landmine and was unable to move. Hisanaga found him and quickly carried him from the minefield to a medic.

“‘Your dad saved my brother’s life,’” Bruce remembers the man telling him.

Bruce, of course, had never heard the story before.