Via the Chronicle of Higher Education’s ProfHacker blog, we learn that blogger and Pomona College Media Studies Professor Kathleen Fitzpatrick’s new book was officially released this morning. Planned Obsolescence: Publishing, Technology, and the Future of the Academy addresses the changes the digital world is bringing to academic publishing and, as ProfHacker notes,  a draft of  the book has been online for review for the last two years. 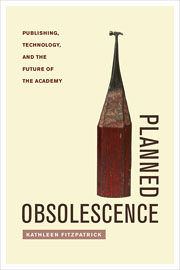 On her own blog, Fitzpatrick notes that’s today’s official launch is both cool and quaint:

“I got my first copy of the paperback about four weeks ago now. Granted, I got it the very day it arrived at the press, and it does take a couple of weeks for Amazon to get its first shipment, to get that shipment into its system, and to get ready to start shipping them out …

But… the Kindle edition. Has also been there, more or less ready to go. Folks even pre-ordered it! And apparently are receiving it today … Which is completely awesome, of course, but it does make me wonder: November 1 was not intended by NYU Press to be an official laydown date; there was no publisher-enforced embargo on sales, or reviews … And given that one of the virtues of the Kindle is that you can have that text right now, why hold it back?”