A Journey of Faith and Inquiry

Paul Kiefer ’20 explores the history of Muslim communities in the American South.
March 4, 2020  by Robyn Norwood 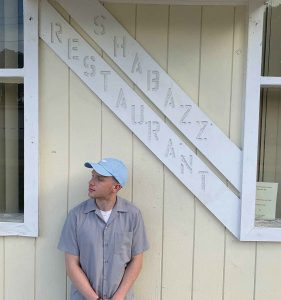 Paul Kiefer ’20 outside the Shabazz Restaurant in Durham, N.C., adjacent to the state’s oldest mosque.

PAUL KIEFER’S JOURNEY of faith and inquiry already has taken him great distances. An American Muslim from Seattle who converted as a teenager, Kiefer ’20 studied abroad in Morocco during his junior year to experience the Arabic-speaking Muslim world. Back home in the United States, he looked toward the American South as he prepared to write his senior thesis in history.

There, he was an outsider of a different sort, a white Muslim gathering oral histories and conducting research on the Southern Black Muslim community that emerged in North Carolina in the 1950s and has grown deep roots in the Tar Heel State—a place where the festival of Eid is sometimes celebrated with fried fish and grits.

“They’re doing it right, the whole Southern thing,” says Kiefer, who was partly drawn to the region because of his family’s history there, though his relatives were not Muslim.

The Black Muslim community in North Carolina that was first planted by the Nation of Islam and later gravitated toward the teachings of W. Deen Muhammad is the subject of Kiefer’s thesis, “A Crescent Moon Rises in Dixie: The Foundation and Development of a Southern Black Muslim Community, 1955-1985.”

“Paul is writing about a topic few historians have investigated. So his work is filling a gap in our collective understanding of the Nation of Islam in the South,” says Tomás Summers Sandoval, associate professor of history and Chicana/o-Latina/o studies. “The archival work he’s done so far is already helping to write that history.”

Kiefer’s research weaves source material such as mosque records and contemporary newspaper reports with oral history interviews he conducted in North Carolina during a Summer Undergraduate Research Program project before his senior year.

“We often think of Islam in the U.S. as a present-day story but Paul’s work is a reminder of the importance of both Islam and Muslims to the U.S. past,” Summers Sandoval says. “At the same time, his work helps us better understand the roles various congregations and faiths played in the mid-century quest for Black liberation and autonomy in the South.”

Islam was not truly new to the South when it was imported from Northern cities such as Philadelphia and Baltimore in the second half of the 20th century. Kiefer found records of Black mosques in the South as early as 1928 and a Black Muslim farm by 1943, though those groups were members of the Moorish Science Temple of America, not the Nation of Islam.

“About 15 to 20 percent of enslaved people in what became the United States were Muslims,” Kiefer says. “There are many well-documented examples of Muslims who practiced openly, who ran Friday prayers on plantations, who wrote letters home. At least three actually wound up going back to West Africa thanks to letters they wrote home in Arabic.”

The history of Muslims in the South is a story worth telling, and Kiefer plans to tell many more. He has applied for a Fulbright-National Geographic Storytelling Fellowship and the NPR Kroc Fellowship, both designed to develop journalists as well as storytellers in other mediums. While awaiting fellowship announcements in the spring, Kiefer also plans to apply for public radio jobs, pursuing his determination to uncover little-known stories and histories.