Reduced to three members by graduation, the 5C improvisational comedy group Without A Box improvises another new beginning.
December 2, 2015  by Paul Sterman ’84 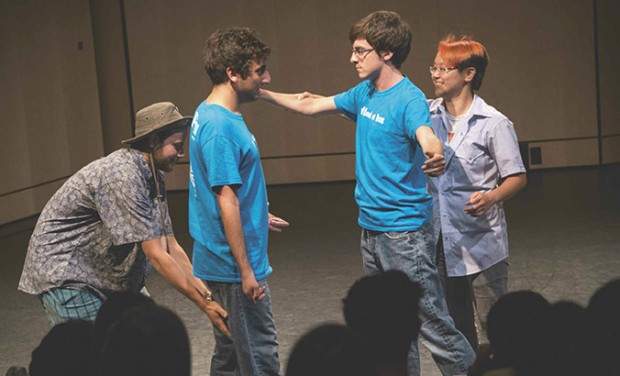 In person, Dan Weinand ’16 is a polite, soft-spoken Pomona College senior. But put him onstage and he is someone else altogether. He’s a hostile loudmouth being interrogated for a crime. He’s a laidback traveler with a Jamaican accent. He’s a TV show host who waxes poetic about the wonders of trash.

He is all of these things in a recent performance by Without a Box, the improvisational comedy group composed of students from the five Claremont Colleges. Their improv shows are a long-running tradition: Pitzer College student David Straus formed the group in 1989. Team members graduate each year, but the group endures, adding new students to the mix.

Without a Box performs about once a month during the school year, at various locations on the five campuses. Weinand, a double major in math and computer science, says it’s a kick to perform in front of fellow students—especially the Claremont crowd, who share a certain frame of reference. “I just love that only on the 5Cs can I make a linear algebra joke,” he says.

The group generally consists of anywhere from five to 10 students. However, when the 2015–2016 school year starts, Without a Box is down to three: Weinand; Lauren Eisenman, a Scripps College sophomore majoring in neuroscience; and Matthew Roberts, a Pitzer senior and history major.

Despite the small number, the crew is in fine form at the September show, held at Pitzer’s Benson Auditorium. More than 100 people are in attendance, and they look to be having a blast. The three performers wear blue Without a Box shirts, and stage props consist of little more than two chairs. 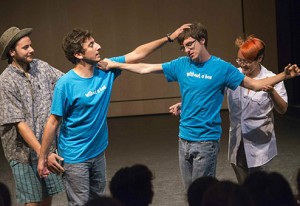 There are topical references (the Pope, Donald Trump), pantomimed actions (smoking, using a cell phone), and a spirit of play throughout. Audience interaction is a big part of the show, with members suggesting scenarios and providing snippets of dialogue. In one skit, two volunteers jump onstage to join Weinand and Roberts.

Here’s the twist: the two students move the bodies of the two performers, as if manipulating human puppets, and the dialogue flows from the movements. The scene starts with Weinand and Roberts facing each other, then Roberts is turned in the opposite direction, to which Weinand cries, “Don’t leave me!” A lovers’ spat emerges, and limbs fly every which way.

Like all good improv performers, Without a Box members embrace the “Yes, and … ” principle: the idea that you accept whatever your scene partner throws your way, however far-fetched, and build on it. As they set up the show’s final scenario—Weinand and Eisenman are co-hosts of an early-morning public access program; Roberts is the guest—they ask the audience to select a name for the TV program. The winner: “Garbage Connoisseurs.”

The two hosts gush about thrown-away toys in trash bins, exquisite finds like the tossed bodies of Barbie dolls. In comes Roberts, an authority on discarded Transformers. Then, a change of direction: the expert is uncovered as a fraud, a betrayer of garbage dreams.

Audience members eat up the show’s quirky, quick-shifting action. “It’s cool that it’s unpredictable and different,” Jonah Grubb, a Pomona senior, says afterward. “With improv, you never know what you’re going to get.”

Weinand, Eisenman and Roberts say they’re not just winging it onstage—they hone their skills through rehearsal. The group practices three times a week, doing exercises in improv game-playing, physical humor, and character work. “Doing improv might be scary if I didn’t feel comfortable with the other performers,” says Weinand. “But I totally do.

“Trust is a really big part of it,” adds Eisenman. 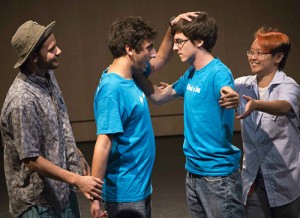 The trio knows that Without a Box needs to get bigger to be at its best, so a week after its September show it holds auditions for new members. Eighteen students show up on a Saturday at Scripps’ Vita Nova Hall. Then that group is winnowed down to nine students invited for callbacks the next day.

Among the hopefuls is Pomona sophomore Zach Miller. In one exercise, he is asked to stand outside while Weinand, Eisenman and Roberts set up a scene with three of the students. Each is given a character feature. One is a ghost, another has a tail, and the third one’s foot is on fire. Miller comes back inside. His task: to guess what distinguishes each of the three, all of whom he is hosting at a party.

Miller is an agile performer. By the end of the scene, he has figured out each one’s crazy feature. Guessing the ghost mystery, he quips, “Say hi to Casper for me.”

Weinand says Without a Box selects performers based on their comedic abilities, physical skills, character range and “how well they keep scenes feeling real.”  The group also wants a diverse mix of students who are passionate about improv, he adds. 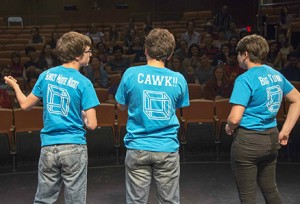 Another aspiring member is Cassie Lewis, a junior at Claremont McKenna College whose parents are both Pomona alums (Kara Stuart Lewis ’88 and Gordon Lewis ’87). During a lunch break, she talks of how she discovered the edgy comedy of Amy Schumer over the summer, a revelation that has inspired her to pursue a career in stand-up comedy. Cassie, the vice president of CMC’s theater group Under the Lights, says she saw Without a Box perform a while ago and was “blown away by how they came up with really funny jokes.” So here she is, eager to become part of the group.

“You can’t be a comedian without doing improv,” she explains.

In one exercise during callbacks, Cassie plays off of Marisa Galvez, a CMC freshman. The setting for their scene is a motel continental breakfast. The two verbally spar as Lewis’s character steals apples and stuffs them into her pants.

Both young women are confident and creative. For most people, speaking off the cuff is daunting. A script provides a security blanket. Yet Lewis, Galvez and the others seem fearless, perfectly comfortable to perform without a net—or a box, if you will.

Most of the students have previous experience with improv, evidence of its growing popularity. Many high schools now have improv teams or clubs. There are improv-based companies like The Second City, Upright Citizens Brigade and ComedySportz, and TV shows such as Whose Line Is It Anyway?

Stretching their improvisational muscles serves students well even beyond the stage. Morgan Blevins, a Harvey Mudd freshman who is a bright light at the callbacks, was on her high school’s improv team and says, “I’m so glad I did improv before I did my college interviews.”

A couple of days after callbacks, Without a Box taps its new members. Miller is selected, as is Lewis, Galvez and Blevins. Also chosen are Pomona sophomore Sean Gunther and Pitzer first-year Eli Fujita.

Miller says he’s excited about performing and “bringing the audience into the absurd scenes that we invent.”

Weinand, who has performed in Without a Box since his freshman year and will soon be applying to graduate schools, echoes the sentiment. “I love making people laugh,” he says. “That makes me really happy.”