What Is the Hive? (And Why Is Everyone Buzzing About It?)

What is creativity? How does it happen? Is it inborn or can it be taught?
December 2, 2015  by Mark Wood 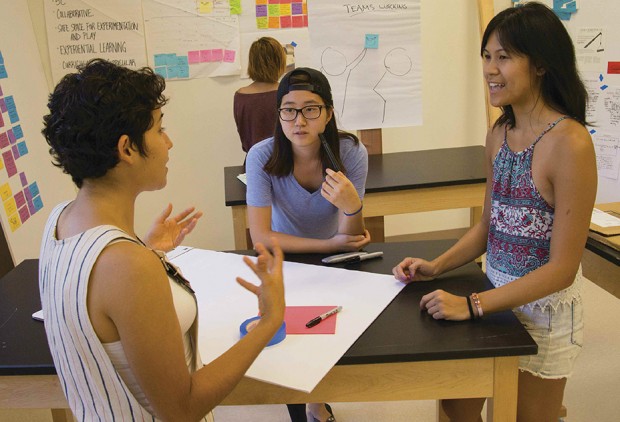 What is creativity? How does it happen? Is it inborn or can it be taught? How does such an intangible ability—or should I say capacity, quality, or maybe mindset?—fit into the structure of a liberal arts education? The faculty, staff, students and advisors who organized the launch of the new five-college Rick and Susan Sontag Center for Collaborative Creativity this fall don’t pretend to have all the answers, but they do share a strong belief that collaborative and creative thinking across disciplines will be essential to solving the problems of the 21st century.

“There’s already plenty of opportunity for creativity within your discipline,” says Associate Professor of Physics Dwight Whitaker, who, along with Harvey Mudd College Professor of Engineering Patrick Little, is serving as co-director of the Sontag Center until a national search for a permanent director is completed. “If a student is truly passionate about physics, they can get an awesome experience working in our research labs, doing creative, cutting-edge stuff that no one else has done before. They can really develop their creative chops as a physicist. We’re already doing that, and I’m confident every department does that very well.”

What’s missing, he believes, is the opportunity to develop those “creative chops” in collaborative settings that bring together experts from different fields to tackle problems that resist disciplinary definition.

“The really messy, important problems that we face are ones that don’t fit into a discipline,” Whitaker says. “I think if you look at the environment, the really messy problems like end-of-life issues, creating an inclusive space for all Pomona students on a local level, these are not going to have a solution that lies within any department. I think the way that these problems are going to be solved is going to be people with vast expertise truly collaborating, getting in the intellectual muck together and doing the messy business of working out mindsets. Being generative and appreciating that their mindset approaches the problem differently than your mindset. That’s a really hard skill to develop.”

So how do you go about developing the creative skills involved in cross-disciplinary collaborations in an academic setting dominated by its distinct disciplines? That was the problem Rick and Susan Sontag—1964 graduates of Harvey Mudd College and Pomona College, respectively—sought to address with their $25 million gift to create the new center that bears their names.

But that remarkable gift was just the start. To help get this innovative new program off the ground, the colleges turned to design experts Tom Maiorana and Vida Mia Garcia of Red Cover Studios, who devoted a big portion of the last year to helping the center’s planners develop a conceptual framework and bring those concepts to life in the form of actual programming.

The result is a work in progress, but a very busy work in progress. Already nicknamed “The Hive” for the buzz of creative thought and collaborative activity it is designed to foster, the new center occupies renovated spaces inside what was once Pomona’s Seeley G. Mudd Science Library, with Pomona serving as lead campus. A chalkboard sign out front invites passersby inside to see what it’s all about. A new website (creativity.claremont.edu) invites students to: “Take chances. Mix things up. Make mistakes. Learn from them.”

That theme of risk-taking is central to the Hive’s purpose. Garcia says students have heard all the familiar clichés about the importance of exploring fearlessly and learning from failure, but the stakes for students at a place like Pomona are just too high to risk failure in anything that counts. The Hive, she says, offers a place where students can take risks in “a low-stakes way” and develop the kind of intellectual resilience that allows them to see that failure is just part of the learning process.

“Intellectually, they understand that, yeah, sure, you need to fail to learn, but where are they going to do that?” says Garcia. “There are precious few venues for that in life, but especially here at the 5Cs, because everybody is so overachieving and everybody sees that in everybody else. So how do we give them that safe space? We heard that over and again in the student interviews, in the ethnography at the outset, and we wanted to bake that into the ethos of this place.”

Those interviews with students and faculty also brought to light another significant concern: time. “They want chances to explore and fail,” Whitaker says. “They want chances to be experiential rather than just critical and writing papers. But then we also definitely heard from both groups, the students and the faculty alike, that, “Yes, we want to do all that. But we have no time.”

With that in mind, the Sontag Center’s programming has been designed to offer a range of activities, with a sliding scale of time and commitment required—from mini-workshops to pop-up courses, guided explorations and full-credit courses.

“I think there are some people who will make the time, and there are some people who will want to just dip their toes in the water,” Whitaker says. “That’s what the workshops are really good for. I think the hope for those is that it sparks something. If it sparks something, then you will carve out the time and you will make the commitment. But I think unless you get in the door, u unless you start to get exposure to these ideas and these mindsets, you’re never going to carve the time out.”

This year’s mini-workshops have ranged in topic from an introduction to improv theatre to empathetic listening to shoemaking. In the latter, students use plastic wrap, a hair dryer and tape to create a prototype of a shoe. Of course, the final products of that workshop will never make it to the shelves of your local shoestore. In fact, you’d barely recognize most of them as shoes. But that’s not the point.

“There are few disciplines where you are expected, if not required, to be a maker, right?” explains Maiorana. “You’ve got engineering, possibly physics, studio art. So those students are going to have some level of comfort and facility with making. But the vast majority actually might not, or might not do it on a regular basis.”

The point, he says, is to demystify the creative process, which is loaded down with preconceptions and misconceptions, and to give people a taste of what it feels like actually to make something. “It’s really rudimentary, but it doesn’t feel rudimentary,” he adds. “Creating physical objects is a way to have a very visceral experience of the lessons we’re trying to impart.”

However, that example also illustrates one of Whitaker’s concerns, not about the center itself, but about how it might be perceived.

“Prototyping is one of the great tools of designers,” he says. “That’s just one of the great tools of creativity, having an object that you can play with. But the kind of low-resolution prototyping we use is pipe cleaners and construction paper, so definitely there’s a danger that it can look like preschool. People walk in and say, ‘This is an academic center? You’re doing design-thinking? You’re just playing with toys.”

But in truth, the playfulness inherent in the program is an essential part of the design. “One of the challenges we have is that the approaches to creating a new mindset, a creative mindset, tend to involve ignoring the rigor to some degree,” Whitaker says. “Because in that early stage, it’s not about the details yet. It’s about forming the question. So you need to create a generative space where everyone feels valued and all ideas are good before you start critiquing them.”

Rigor comes later in the creative process, and there’s plenty of it to go around at the upper end of that sliding scale of activities, which includes project-based learning. That’s where teams of students and faculty take on daunting problems in the real world, a prospect that Co-Director Patrick Little of Harvey Mudd College finds particularly exciting, both for the experience the students will receive and for the potential to make a real difference in the world.

“One of the open-ended problems we’re just in the process of getting started looking at is reimagining certain parts of the health care experience for patients with cancer,” he says. “And if you think about that, if you put that in any kind of a disciplinary framework, what ends up happening is that you necessarily limit the ways you can imagine that. So if it’s an engineering program, it wouldn’t make sense to talk about this in non-technical solutions, because you’d be moving away from the very thing you’re good at. Or if you were to think of it in the context of a computer science program, you would normally be thinking: ‘How can we provide software or applications?’ The beauty and, I think, the power of the Sontag Center is that it can start by dealing with the question of ‘What are the needs?’ rather than ‘What are our capabilities?’”

It might be surprising to think of college students helping to solve some of the world’s big, messy problems even before they earn their diplomas, but Little thinks they may be particularly well suited to this sort of cross-disciplinary, out-of-the-box thinking. “They haven’t yet been told these problems are beyond them,” he says. “They haven’t yet been told they have to stay in their silo. And as a result—whether you’re talking about something that’s really playful like making shoes or whether you’re talking about something practical, like the work that’s being done right now to reimagine the design of the GIS facility over at the library or whether you ask them about one of these large global problems—they just bring incredible energy.”

As its reputation spreads, the center has also begun to attract groups from across the 5Cs that want to make use of its creative resources and ethos. For instance, Pomona’s Quest Scholars recently met there for a brainstorming session. “We came to the Hive to brainstorm in groups and kind of figure out what we want out of our Resource Center,” says Ashley Land ’16. She goes on to add: “The space is just so great for being creative and being able to take an idea and make something bigger out of it, or take no idea and make an idea.”

Indeed, the ultimate success of the Sontag Center may be the influence it has on the rest of the five campuses. Gail Gallaher ’17 hopes that students will carry a little of the ethos of the Hive back into the rest of their college experience. “You’re always thinking about how you can grow and how you can learn, even from mistakes and failures. You’re not afraid of challenges because you know you’re going to learn from them. I think the whole 5Cs could benefit from that spirit.”