Long-time NPR science correspondent Joe Palca ’74 had an idea —A big idea. what if he stopped trying to identify the important science stories and focused exclusively on the interesting ones?
December 2, 2015  by Andrea Appleton 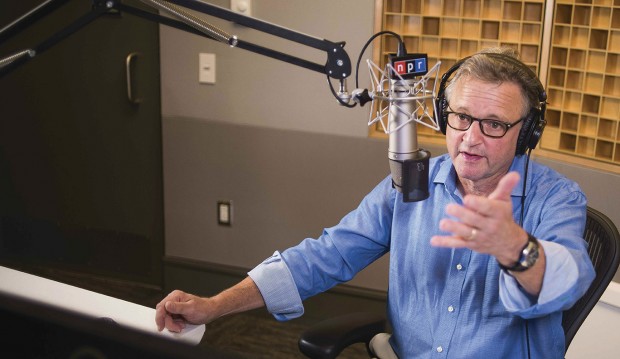 Joe Palca’s cubicle in NPR’s Washington, D.C., headquarters is strewn with bicycle gear from his daily commute, assorted piles of books about science, and random objects: a can of mackerel, a leaf-shaped bottle of maple syrup. From this cluttered perch, the longtime science correspondent has the power to shape what becomes news. If Joe Palca ’74 decides a story is worth putting on the air, roughly a million listeners hear it. And if he misses a story, well, some of those listeners may never hear about it.

In 1996, Science magazine published a study on a novel approach to treating cancer. Immunologist James Allison and his co-authors reported that they had successfully treated malignant tumors in mice by blocking molecules on immune system cells that act as a brake on immune response. Palca didn’t cover the study. “Nobody covered that paper,” he shrugs. “Everybody has cured cancer in mice.”

Two decades later, Allison’s immunotherapy methods have led to the first effective treatment for advanced melanoma. Patients used to die in less than a year; with treatment based on Allison’s research, some now live more than a decade. Allison has won dozens of prestigious awards for this work in recent years, including the Louisa Gross Horwitz Prize, often a precursor to the Nobel.

Someone, it seems, ought to have reported on that initial study. “If news is to tell you about the things that are important,” Palca says, “that’s the paper I should have been telling you about.” But out of all the promising studies published that week, Palca could not have known which one would make history. Reporters rarely do. “None of us in science journalism is smart enough to know which are the really important papers,” he says. “No one is.”

Nevertheless, the media generally presents scientific findings as if they were breaking news. As a result, Palca says, studies that will later prove inconsequential get the limelight, sometimes simply because they lend themselves to sexy headlines. Meanwhile, reporters inadvertently ignore research that, in hindsight, they ought to have covered (like that 1996 immunotherapy study). So a few years ago, after two decades as an NPR science correspondent, Palca had an idea. A big idea. What if he stopped trying to identify the important science stories and focused exclusively on the interesting ones?

Three years later, Joe’s Big Idea is going strong. The series tells the stories behind innovations: what drives scientists and inventors, how they come up with their ideas, and how they implement them (or try to). Palca has produced pieces on soccer-playing robots, ant traffic patterns, and a phone app that checks photos for eye disease. He’s followed efforts to end dengue fever, the search for life on Mars and the passionate quest for the perfect toothbrush. He hopes that by focusing on what’s intriguing about the scientific process, listeners will come to share his fascination. As he recently told an audience, “I want people to know there’s a joy and a delight and a beauty in science.”

The key to conveying that beauty is often the researcher. “You can’t tell a really moving story about a nanoparticle,” Palca says. “But the person studying the nanoparticle can be pretty interesting.”

Pediatric oncologist James Olson is a case in point. Olson developed a paint that makes brain tumors glow, helping surgeons to locate and remove them. While the story of the paint itself is fascinating—it’s derived from scorpion venom—the profile of the man behind it got the most emotional response of Palca’s career. It turns out Olson is a practicing physician. This is what drives his tumor research: He’s tired of telling parents their children are going to die. He’s “sick of seeing the devastation on people’s faces,” Palca says in the piece, “sick of feeling helpless.” Yet Olson has the rare ability to cast a child’s cancer prognosis in a bearable light. One parent tells him her 7-year-old’s death to cancer “was as beautiful as her birth” because he helped the family see it that way. Here’s a man who is not only trying to cure pediatric brain cancer; he’s helping parents part with children who’ve succumbed to it. A hundred listeners left grateful comments about the story online. “I had colleagues coming up and hugging me, telling me they were sitting there sobbing,” Palca says. ”And I understand it because it still makes me tear up.” 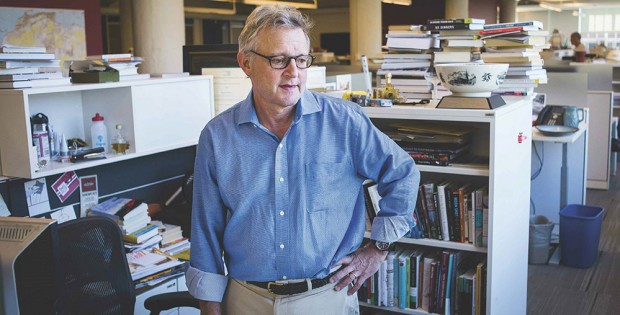 Of course, not all subjects have such inherent drama. Still, Palca says, scientists are not the cold-blooded, calculating creatures they are often presumed to be. “I’m sick of the caricature, of the white lab coat. The lab coat says ‘I’m an expert, not a person.’”

Palca’s irritation on this subject is personal. An animated guy with a mischievous streak and a penchant for tangents, he is himself a trained scientist. He has a PhD in psychology from the University of California at Santa Cruz, where he studied human sleep physiology. Remember Jim Allison, the immunologist? Palca worked for him as a lab technician, his first full-time job out of Pomona College. (He also happens to be married to a molecular biologist, a deputy director at the National Institutes of Health.) Palca decamped for journalism immediately after earning his degree. Research was tedious to him. “You have to have a long attention span to be a scientist,” he says.

Palca’s attention span may not have served for years of lab work, but he has covered some impressively arcane research as a reporter. A giant hand-painted bowl in his office is proof. He received the bowl for delivering the 24th annual Ullyot Public Affairs Lecture to the Chemical Heritage Foundation. It was titled “Covering Complex Science, or How I Explained a Frank-Kasper Phase in Sphere-Forming Block Copolymer Melts to a Radio Audience.” Palca really did produce a story on a study by that name. In fact, he chose it precisely because it was so daunting. “I said I’m going to pick the most obscure thing I can find and do a thoughtful, serious story about it just to prove I can,” Palca says. (One charming detail from the piece: the researchers used marshmallows and coffee stirrers to model the molecules they studied.)

Palca claims no research is too obscure to make for an engaging story. He travels around the country giving lectures to scientists about how to couch their research in compelling terms. The trick, he says, is knowing what to leave out. Sometimes it’s the very detail the researcher is most fixated upon. Scientists tend to focus on what is new in their fields, he says, a habit that only perpetuates the media’s tendency to do the same. “A lot of the time scientists think that the ‘news’ is the new thing, which of course it is,” Palca says. “But in fact, the new thing may be pretty tedious.”

Take adaptive optics. This technology has been used in astronomical telescopes for several decades. It unblurs the blurring caused by the atmosphere. “So if you say you want to do a story about adaptive optics, well, the scientist will tell you about how they’ve tuned the laser and how the signal’s getting better and the interferometry,” Palca says. “And you say, ‘Wait a minute! You can do that? You can unblur the atmosphere?’ That’s where scientists get lost. They know about adaptive optics. It doesn’t occur to them that nobody else does.”

That’s because it’s easy to get lost in the details as a researcher, Palca says. The work can be monotonous. Palca recalls reporting on the successful cloning of Dolly the sheep in the mid-1990s, an event that spawned headlines the world over. Scientific findings too often overshadow the work it took to get to them, Palca says. So his reporting focused on the tremendous effort it took to clone just one sheep. Palca did. “It took months of failure, months and months and months of boring, tedious, awful, discouraging failure to get one successful birth,” he says.

By interesting the public in the fits and starts that characterize scientific research and the personal drive that keeps researchers forging ahead, Palca hopes to convey a truer picture of how science really works. He says that the alternative, focusing on dazzling findings and reporting them as breaking news, gives the public the wrong idea. “I think it contributes to a sense of science lurching from breakthrough to breakthrough,” rather than as a continuum with incremental steps along the way, he says. It may also engender mistrust. “I wonder if the need to do more and more and more big science stories, the really exciting stories, has set science up for a fall,” Palca says. “Water on Mars? Wait a minute, I thought you figured that out already. Why are we still hearing about it?”

In the end, Palca hopes his own enthusiasm for science, and that of the people he talks to, is contagious. “The passion that people have and the desire to make a difference, it’s fun to listen to that,” he says. As he told an audience recently: “Not every study is going to lead to Teflon or Tang, but we’re going to learn something about the natural world. That’s got to be worth something in our culture.”