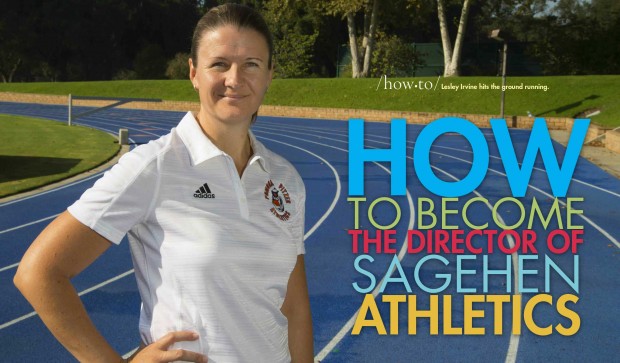 There’s nothing particularly surprising in the fact that Pomona-Pitzer’s new athletic director has hit the ground running. Lesley Irvine has been moving fast ever since she was a child—first as a multi-sport athlete, then as a high-profile coach and finally as an athletic administrator. At Pomona, she has assumed a newly created full-time position as chair of Pomona’s Physical Education Department and director of the joint athletic program of Pomona and Pitzer colleges.

Since her arrival, Irvine has been visible all over campus as she acquaints herself with every aspect of Sagehen sports—from intramurals to varsity—and begins to plot a course for the future. “As I think about the vision for Pomona-Pitzer Athletics, I think about broad-based competitive excellence,” she says. “I think about providing an experience that is at the highest level for our student-athletes. And I think about the visibility and connectivity of athletics on the campuses here.”

Grow up in Corby, a steel town in central England where most people are of Scottish descent and speak with a Scottish brogue. Develop into an active child, always sporting a scraped knee. Get involved in athletics with the encouragement of your dad, an avid soccer player, coach and fan.

Join a track and field club at the age of 9 and, since you excel in a range of athletic events, specialize in the heptathlon. In high school, find yourself playing almost every sport, from basketball to volleyball to soccer. Discover the game of field hockey and fall in love with it.

Accept an invitation to play on the English junior national field hockey team at the age of 16, while also competing internationally in the heptathlon. Play for England in a victory over Scotland in the Six Nations field hockey tournament and have to explain to your teammates why your dad, a proud Scot, is rooting against you.

Become the first member of your family to go to college, playing field hockey at prestigious Loughborough University. While there, win five national championships. During your second year, teach tennis at a summer camp in Maine (though you’ve never touched a tennis racquet before) and find yourself at home in American sports culture.

After graduating, come back to the U.S. for graduate school, attending the University of Iowa and playing competitive field hockey for one more year, scoring the only goal in a 1–0 victory over Stanford University in your first trip out West and leading your team to a Final Four appearance. Earn your master’s degree in health, leisure and sports studies.

Return to Stanford as assistant women’s field hockey coach. Discover that you love working with committed student athletes who love sports as much as you do. After two years, succeed the retiring head coach and spend eight years at the helm of Stanford’s elite program, guiding them to three straight NorPac championships.

Leave Stanford to enter sports administration, spending five years at Bowling Green State University and rising to the rank of senior associate athletic director. Decide the job at Pomona-Pitzer is a perfect match for your abilities and your desire to help build something special for talented and motivated student-athletes while promoting wellness for a whole community