What if a science museum could be a catalyst for change, both for kids and for a community? for Kafi Blumenfield ’93, that question became a quest.
December 2, 2015  by Robyn Norwood 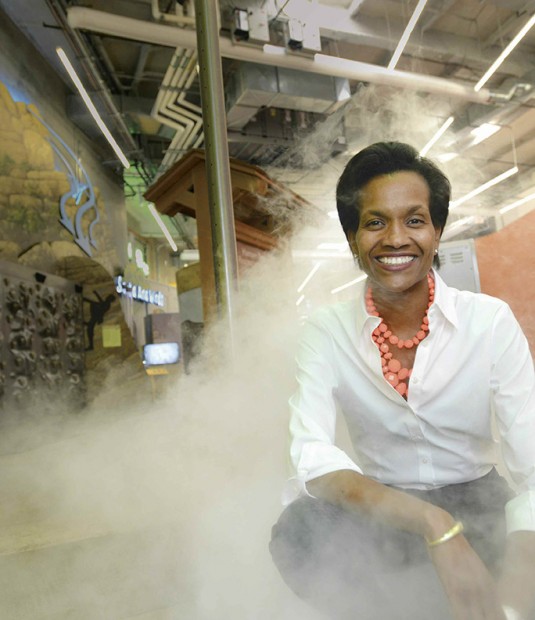 The stretch of Foothill Boulevard near the corner of Osborne Street in the northeast San Fernando Valley has been infamous for nearly 25 years. It was there in 1991 that Rodney King was brutally beaten by Los Angeles Police officers after a high-speed chase that ended with the unemployed 25-year-old parolee being kicked, tasered and battered with batons, all captured on videotape by a nearby resident. One year later, the officers’ acquittal sparked the 1992 Los Angeles riots that left 53 dead, 2,300 injured and caused $1 billion in property damage.

Today near that spot, children roam the striking, angular modern building that houses the new Discovery Cube Los Angeles, a hands-on museum aimed at teaching young people about science, technology, engineering and math, often referred to by the acronym ‘STEM.’

Inside, Kafi Blumenfield ’93, executive director of the year-old museum, kneels to join a small child sweeping his hands through the sand of an interactive exhibit that displays the resulting changes in topography on a digital map.

To Blumenfield, this is about more than science. She sees the museum as a catalyst for change in the community, a way to build a better Los Angeles by starting near the place known for the traffic stop that changed the history of a city.

“We are in a neighborhood that is full of kids with potential but lacking in resources,” Blumenfield says. “So many of our kids go jobless. They’re strong, eager, talented kids, but they’re jobless. Overlay that with the fact that we have a gap in our pipeline of young people who are ready and willing and able to enter the STEM jobs. So this is a natural fit. If we can provide these kids with additional educational support to encourage them to enter these types of jobs, it will not only make their lives and their households better, but this whole region better.”

Running a children’s science museum might seem an unlikely role for a vibrant, well-connected civic leader whose first job after majoring in politics at Pomona was as a White House intern. (She served in the Clinton Administration two years before the most famous intern in history arrived in Washington.) After earning a law degree from UCLA and working at various jobs related to such issues as housing and the environment, Blumenfield’s most recent role was president and CEO of the Liberty Hill Foundation, an L.A. nonprofit that gives about $5 million a year in grants to grass-roots organizations promoting social causes.

She has strong political ties, both professionally and personally: Her husband is Los Angeles Councilman Bob Blumenfield, a former member of the California State Assembly whose West Valley council district includes Woodland Hills, where the couple lives with their two elementary-aged children.

It was one of Blumenfield’s personal/political connections that led her to Discovery Cube LA. She was having lunch last fall with Wendy Greuel, the former Los Angeles City Controller who ran for mayor against Eric Garcetti in 2013. Greuel, then a consultant for Discovery Cube LA and now vice chair of the board, suddenly envisioned a match between the museum and Blumenfield, who had planned to take a year off to reflect on the next step in her career after leaving Liberty Hill.

“As we were talking about life transitions and things to do in the future,” Greuel says, “I heard how she cared about kids and about how to make a difference in their lives at this age, around elementary school. So I said, ‘Would you ever think about this?’ Because it was outside the box.

“But as she met with the team, you saw that she saw it as more than a building and more than a children’s science museum. She saw it as a way to train teachers to teach science, and a way to excite young girls about science. She sees it as part of a way to seek social justice. She frequently talks about this being the corner where Rodney King was beaten. I’m inspired by her when she gives those tours. 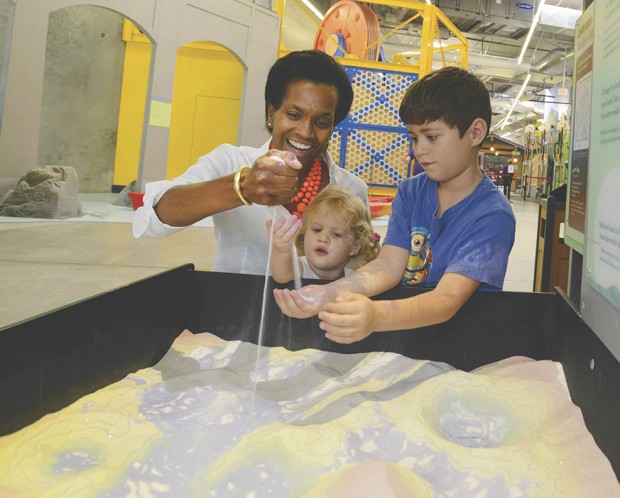 “She gets it. She gets that it’s transformative, not only for the kids who come in, but for the neighborhood. This is a community that wants to be known for something more than where Rodney King was beaten. This is something that’s a spark.”

Among the sparks for Blumenfield were conversations with her daughter, now 9, and her 6-year-old son.

“I was shocked when last year my daughter told me that she was not good at math and science,” Blumenfield says, even though the family had a tradition of outings they called Science Saturdays. “I said, ‘Why do you say that?’ She said, ‘Well, there are not a lot of girls in my class that like math and science.’ We hear that all too often. She was a big part of this project because we really want to see more young girls engaged in science, as we do with young boys.”

Her son, though, “sealed the deal,” Blumenfield says, when the family visited Santa Ana’s Discovery Cube Orange County, the well-established older sister of the two museums. (Together, the museums drew 631,045 visitors in the last fiscal year. About 220,000 have visited Discovery Cube LA since it opened last November, including 34,500 students on field trips.)

“He was 5 at the time, and I couldn’t get him out of the building,” Blumenfield says. When she cautiously broached the topic of going back to work sooner than planned to head Discovery Cube LA, her son’s response was emphatic. “‘We are in!’ he said,” she remembers with a laugh. “So they’re here a lot.”

Despite the STEM focus, Discovery Cube LA is about more than academics and career-related science. It has an additional emphasis on environmental stewardship and healthy living issues of particular importance in the San Fernando Valley, where air quality and aquifer contamination are significant concerns.

The “Aquavator” is an exhibit that simulates descending deep into the earth’s crust in a special elevator to view geological layers while learning about underground water aquifers.

In “Race to Zero Waste,” visitors stand alongside a moving conveyor belt, trying to correctly sort recyclables from other waste to divert trash from landfills. “Look, it’s the trash game,” a woman says as a child runs up to it.

Elsewhere in the museum, a faux market offers healthy local produce, green cleaning products and an opportunity for children to “shop” and check out with their selections.

Another exhibit features a portion of a built-to-scale California home, complete with solar panels. Visitors can go on a sort of scavenger hunt using handheld devices, seeking out opportunities to save energy and water. They find home computer monitors left on when not in use, becoming “energy vampires” that waste power. A kitchen faucet is programmed to intermittently drip, and observant visitors can hear the sound of the bathroom toilet running too long. (Eventually, museum staff found it necessary to screw down the lid. “You can imagine, with a bunch of potty-trainers,” Blumenfield says with a laugh.)

Playfulness aside, “we’re trying to address some of the problems of the day but do it in a very affirming way that allows people to see how they can actually effect change,” Blumenfield says. “I think that’s really important because some of the problems we’re faced with, particularly from the kids’ vantage point, it can all seem so overwhelming. They really don’t know what they can do in their little lives to make a difference. So here, they get to see it in some very practical ways.”

On the job since last August, only a few months before the November opening of a museum that earlier had stalled because of financial issues, Blumenfield is clearly in her element. She oversees a budget of about $5.3 million as well as a staff of 67 full-time and part-time workers, plus a large group of volunteers who range from teenagers to retirees. Walking the museum, she greets visitors brightly and calls workers by name.

Touted as the first major museum in the San Fernando Valley, an area with a population of more than 1.75 million, Discovery Cube LA is a new anchor in the Lake View Terrace neighborhood, a demographically diverse community with large Latino and black populations. The most visible landmark has long been the Hansen Dam Recreation Area, with its large sandy-beach manmade pool.

“It’s both very urban in ways you would expect an urban community to be, and at the same time, there’s some—I don’t know—country living, right outside our doors,” Blumenfield said. “Summer camps are tending to come here for half a day, and then they go to the pool for half a day, so it’s a great combination of science and nature.”

The community has moved on from the notoriety of the Rodney King incident, though it will be the subject of retrospectives as the 25th anniversary approaches in March. Two of the acquitted officers later served prison time after being convicted of violating King’s civil rights in a subsequent federal trial. King himself died in a backyard pool in 2012 at the age of 47.

Almost a quarter-century later, children inside the Discovery Cube museum learn about the solar system or earthquakes or how the ice on a hockey rink is made. For Blumenfield, instead of putting the funding into social change, now she is putting the fun into it.

“For me, it’s all the same thing,” she says. “It doesn’t matter if I’ve been in a legal organization, a social services organization or here, an education center, or a foundation. My career has been dedicated to providing opportunities to those who don’t have the same resources as those who have more. And to try to help people succeed, no matter if they live in downtown L.A. or here in the beautiful northeast San Fernando Valley. I think every child deserves the absolute best education, and there are many ways to go about that.

“So I don’t see the different stations that I’ve been in life, I don’t see them being that different. The beautiful thing about this place that is different, though, is I get to walk the halls, and I get to see the people that we are trying to serve. That lights me up. It gives tremendous meaning to see, every day, people who want to succeed.”